(Minghui.org) Falun Gong practitioners held a rally and a candlelight vigil in front of the Chinese Consulate in Vancouver on July 10, 2022. They commemorated the lives of fellow practitioners who died during the Chinese Communist Party’s (CCP) 23-year-long persecution and called for joint efforts to stop the human rights abuses in China.

Practitioners stood quietly, dressed in yellow shirts and holding banners. As the event progressed, practitioners sat and held candles to commemorate the practitioners who died from the CCP’s persecution. The scene was solemn.

Falun Gong practitioners hold a rally in front of the Chinese Consulate on July 10, 2022. 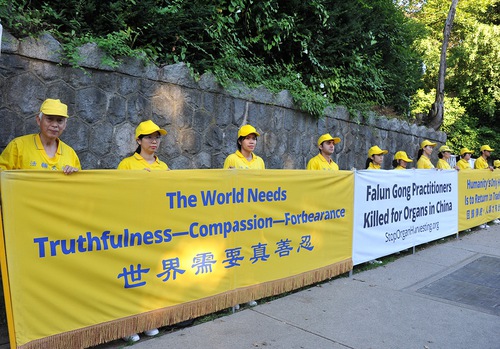 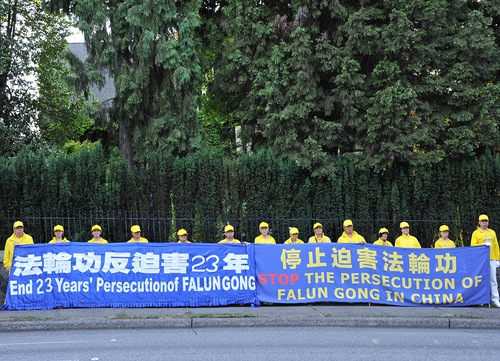 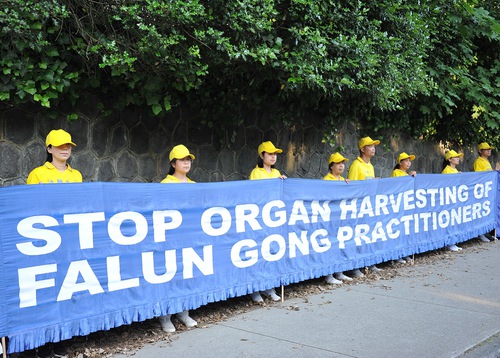 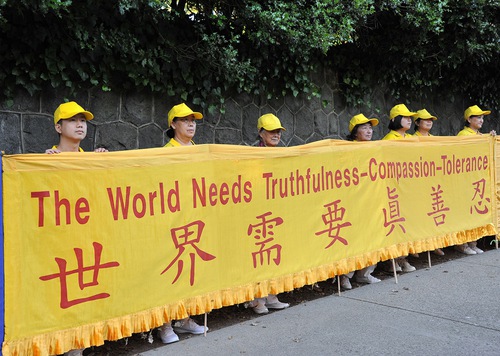 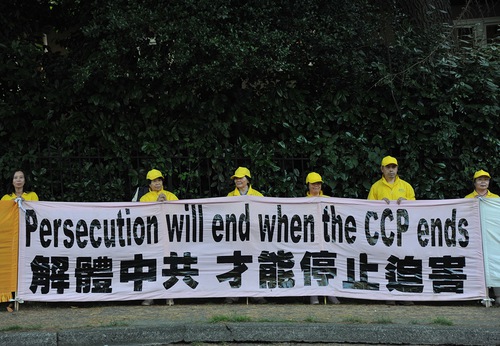 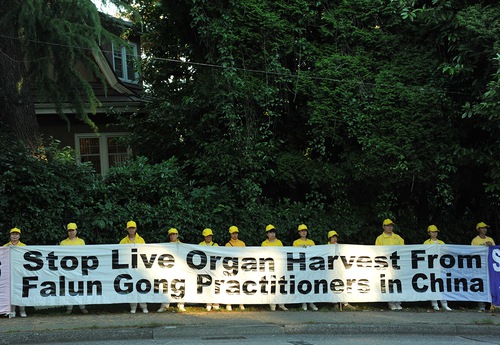 Falun Gong practitioners hold banners in a rally in front of the Chinese Consulate on July 10. 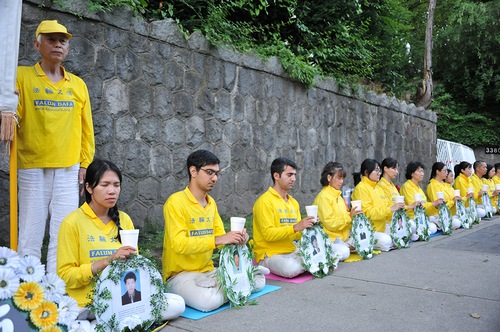 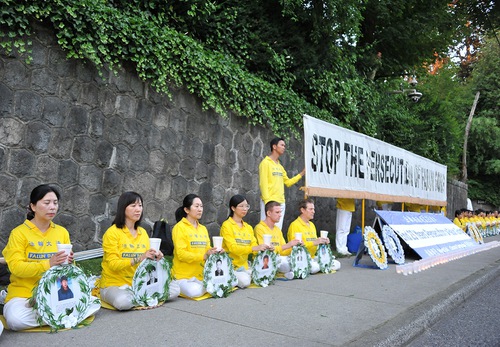 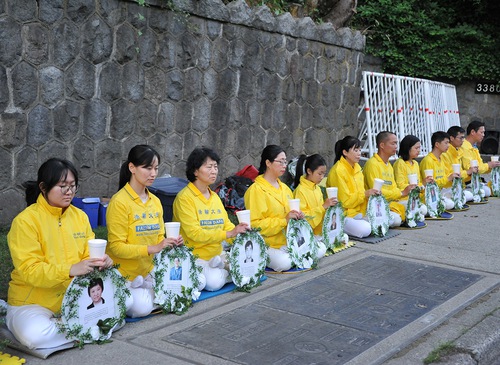 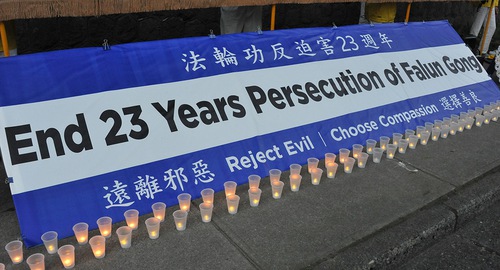 Candlelight vigil in front of the Chinese Consulate in Vancouver on July 10, 2022.

Practitioner Zhang Su, a representative of the Canada Falun Dafa Association, spoke during the rally. She said, “Extensive evidence confirms that the persecution of Falun Gong remains the most serious and violent campaign against a group in China today.” 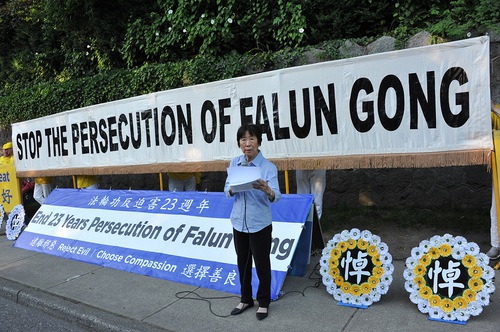 Ms. Zhang Su, representative of the Canada Falun Dafa Association, speaks during the rally on July 10.

“And in order to cover up the crimes, the CCP manipulates the international community to be indifferent to the brutality against Falun Gong practitioners. The CCP uses money, political pressure and propaganda to attack Falun Gong. In Canada, CCP agents continue to spread hatred against Falun Gong and exert pressure on all levels of government officials to make them remain silent about the persecution.”

She said that the CCP is not just targeting Falun Gong but also challenges the conscience of every bystander.

Dennis Watson is a well-known Canadian blogger who has supported Falun Gong practitioners’ efforts to end the persecution for many years. At the rally he said that Falun Gong is a very good group of people, but is unreasonably persecuted by the CCP. He said the CCP has been lying, so Canadians should recognize the horrific lies of the CCP and not to be deceived by the Party.

Witness to the Persecution

Many Falun Gong practitioners who attended the July 10 event have experienced the persecution in China firsthand. Alice Zheng was one of them.

Ms. Zheng, who is in her 80s, was a former senior engineer in a foreign-owned company in Beijing. Before practicing Falun Gong, she had many health problems. Although she sought medical treatment for a long time, she still could not get rid of her pain or the diseases.

In November 1995, Ms. Zheng began to practice Falun Gong and realized that she should follow the principles of Truthfulness-Compassion-Forbearance to be a truly good person. She has practiced ever since.

“In less than half a year, those chronic illnesses were gone without treatment,” Ms. Zheng said. “I was truly happy about being free from disease. It has been almost 30 years now, and I remain healthy and am full of energy.”

Ms. Zheng recalled doing the exercises in Beijing’s Zhongshan Park before the persecution. She said there were several practice sites in the park. Senior officials and an entourage of security guards passed by them every morning for a walk. Once, an official from the foreign affairs office of the Beijing Municipal Government accompanied the mayor of Kuwait to observe them doing the exercises.

After July 20, 1999, when the CCP began to persecute Falun Gong, Ms. Zheng couldn’t understand why she was not allowed to practice the exercises that she had benefited so much from.

On July 22, 1999, she and her friends headed to a petition office to speak up for Falun Gong, but they were stopped by the police before they got there. They were detained for a whole day, without water or food. The police officers threatened them and threatened their family members and children to pressure them to give up their belief.

On the morning of July 23, 1999, dozens of military vehicles loaded with armed policemen arrived at the practice site in Zhongshan Park. Soldiers leapt out of the vehicles and yelled at the Falun Gong practitioners, ordering them to leave. Ms. Zheng was no longer able to openly practice the exercises outdoors.

“After practicing Falun Gong, I cared about my neighbors and often cleaned the shared toilets, stairs and corridors. My neighbors were friendly and respectful to me. Right after the persecution began, my neighbor told me to practice in our yard. Later, he said I should practice only at home. And later, he threatened to report me when I gave him Falun Gong informational materials.”

Although the CCP’s persecution caused Ms. Zheng a great deal of suffering, she has never wavered in her belief. It has been 27 years.

“I started practicing Falun Gong with the wish to heal my illnesses and keep fit,” Ms. Zheng said. “Through further practice, I gradually understood that Falun Gong teaches people to assimilate to the principles of Truthfulness-Compassion-Forbearance. Cultivation in accordance with the principles can make one healthy and a benefit to society.

“Falun Gong teaches practitioners to reach the state of being selfless. In today’s materialistic society, Falun Gong is a pure land. So I have been practicing it to improve my realm little by little. Although I am in my 80s, I feel that I have a quick mind and can walk fast. Practicing Falun Gong is my greatest happiness.”

New Practitioner: I Wish the CCP Would Stop the Persecution

Sydney Claremont is a student at Vancouver Island University. Anxiety had affected her life and studies, and her mother was very concerned about her. A colleague of her mother’s recommended Falun Gong to them and so she took her daughter to the park to practice the exercises every week.

“Doing the exercises has been very helpful for my anxiety. I feel like I’m more in control of it now, and I do have more confidence in myself,” Ms. Claremont said. “I feel relaxed, especially when I close my eyes and meditate along with the exercise music.”

Ms. Claremont hopes that the CCP regime will stop the persecution and allow freedom of belief in China.

“Keeping Up with Master’s Fa-rectification Progress”