(Minghui.org) My hometown is a small city in northeast China and is adjacent to the Heilongjiang and Lalin rivers. In May 1994, Falun Dafa, an ancient cultivation practice, was introduced by word of mouth. Since then this small city has witnessed many touching stories that show how wonderful Falun Dafa is and how practitioners validated Falun Dafa during the persecution.

In April 1994, five people from my hometown attended the seventh Falun Dafa workshop held by the Changchun Qigong Scientific Research Association at the auditorium of Mingfang Palace of Jilin University in Changchun. When they returned they told others about Falun Dafa. They didn’t do anything to advertise or promote it. However, it was soon practiced by more and more people. Within three months, more than three hundred people started practicing Falun Dafa.

Every morning, practitioners did the exercises accompanied by soothing music in the parks. The scene was sacred and peaceful. 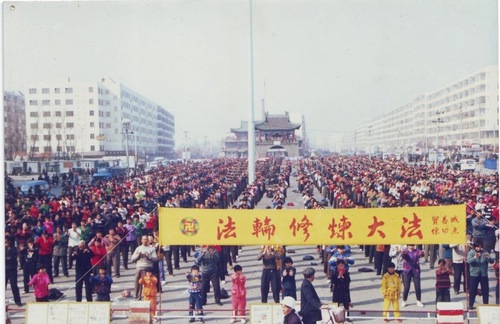 Falun Dafa’s quick spread and popularity were due to its miraculous effect in resolving diseases and maintaining fitness. More importantly, it reinstated a long-lost sense of morality: people handled everything they encountered with sincerity, kindness, and tolerance. The introduction of Falun Dafa brought people hope and showed them how to return to their true selves—they felt reborn.

In those days, people spontaneously went to the practice sites after work to do the exercises and read the Fa together, regardless of their profession, age, or gender.

China was saturated with Communism’s atheist ideology of “struggle” against God and each other. The introduction of Falun Dafa reminded them of their long-lost culture and brought about a rapid rebound in people’s morality. That brief time when practitioners could openly practice Falun Dafa is still unforgettable for those who were there.

For four years, starting from July 1995 to July 1999, practitioners introduced Falun Dafa to all the surrounding towns, counties and villages. In groups of three or two, they went to the countryside to play videos of Master’s teachings and offered to teach people the exercises for free.

They usually rode their bicycles to remote villages, telling people how they benefited from Dafa physically and mentally. During the harvest season, they helped in the fields during the day and played videos of Master’s teachings at night.

In winter, they had to walk their bicycles in the bitter wind and snow. On rainy days, they sometimes fell on the muddy country roads. Despite the many unforeseen difficulties they encountered, practitioners went from town to town to introduce Falun Dafa. Practice sites and Fa study groups were established one after another.

In April and May of 1998 hundreds of people from fourteen towns and villages joined together to promote Dafa at the countryside fairs. Groups of young practitioners rode motorcycles in the front, followed by bicycles, horse-drawn carts, and tricycles. Most practitioners walked. The touching scenes are still unforgettable.

On April 4, 1998, practitioners held group exercises at the east gate of the city. There were about seven thousand practitioners in the square. The scene was magnificent, and the atmosphere was peaceful and tranquil. Crowds of onlookers were attracted by the powerful energy field and watched in awe. When the exercise demonstration ended, many people clapped their hands and said, “Great! It’s amazing! Watching this makes me feel great!”

With more and more people practicing, there were group exercise sites in twenty-eight towns and villages near my hometown.

The last group exercise was on July 21, 1999, the day after the Chinese Communist Party (CCP) began the persecution. Practitioners were surrounded by the police and then forcibly dispersed.

Activities Before the Persecution

After reading the Fa together, some practitioners reflected on how they applied the teachings in their day-to-day lives and compared their experiences. They felt that they improved quickly.

Gradually, more practitioners wanted to talk about their cultivation experiences and decided to hold small conferences. During the conferences, practitioners talked about how they benefited from Dafa physically and mentally and gave thanks to Master Li (Dafa’s founder) from the bottom of their hearts. New practitioners who listened learned how sacred cultivation was, and cherished the opportunity to improve themselves.

Practitioners also held two painting and calligraphy exhibitions. During the second exhibition held in May 1998, more than 300 pieces of calligraphy, painting, embroidery, and other artworks were displayed. As one practitioner said, “Every stroke, stitch, and word contains respect for Falun Dafa and gratitude to Master.”

In 1999, the third exhibition was canceled due to the persecution. All the artworks were confiscated and destroyed.

After July 20, 1999, when the persecution began, many practitioners sacrificed their lives to appeal for Falun Dafa and redress the slander the CCP was broadcasting on its state-run media.

In one large brainwashing center downtown alone, nearly 1,000 people were imprisoned, including people as old as 80 years old and children as young as three years old. They were detained until June 2001. Practitioners were beaten, forced to stand for hours (a form of torture), forced to stand outside in winter, and force-fed. More than eighty people were sent to re-education through labor camps.

Under the unfair treatment and having no way to appeal and seek justice, Falun Dafa practitioners decided to clarify the truth to people and uphold the truth in their own ways.

Practitioners started printing materials and distributing them, but the production site was soon discovered by the CCP’s agents and destroyed. They had to start from scratch. They rented places from sympathetic people and taught themselves how to produce the materials.

Practitioners paid for the equipment and supplies. Because so many practitioners lost their jobs because they refused to give up their faith, many were in financial difficulty. But knowing how urgent it was to clarify the truth to people they gave whatever they could. When the practitioner responsible for purchasing the equipment received their donations he wept as most of the money was in small coins.

Practitioners used many ways to tell people the true situation of the persecution. They went out at night and put up truth-clarification materials in public places. During festivals, they hung up small triangular flags made of colorful paper with “Falun Dafa is good” printed on them. They also hung small banners with “Falun Dafa is good” written on them in the trees.

Some practitioners sprayed the words “Falun Dafa is good” on the walls at night with spray paint. Many times the words were still clearly visible even after the police tried to cover them with white paint.

One night, when a practitioner was working on the last character of “Falun Dafa is good” on a wall a police car came. He finished and was able to get away.

“My Whole Family Benefits from the Practice of Falun Dafa”