(Minghui.org) Most large scale gatherings were suspended for two years due to the COVID-19 pandemic, but residents in the greater Toronto area decided to bring them back this summer. During the weekend of June 18 and 19, 2022, Falun Dafa practitioners’ Tian Guo Marching Band, Waist Drum Team, and Exercise Demonstration Group took part in three parades in Burlington, Oshawa, and Welland. Their performances were warmly received by spectators. Many people clapped to the rhythm of the band and waist drums. Some imitated practitioners’ movements as they demonstrated the Falun Dafa exercises. They took photos and cheered when they saw the Falun Dafa practitioners coming down the street. 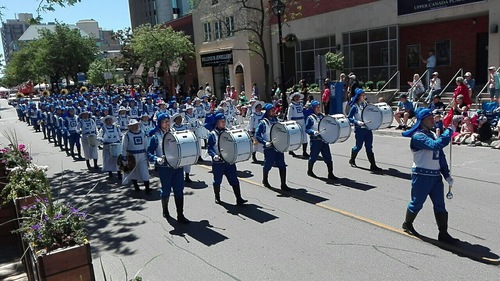 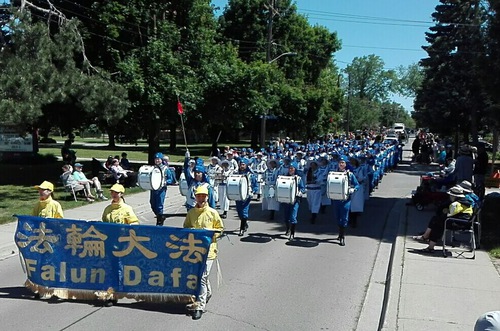 The Waist Drum Team at the Rose Festival Grand Parade in Welland and Sound of Music Festival in Burlington.

Pauline and Alice recorded the performance on their cell phones when the Tian Guo Marching Band approached. Alice said she was impressed by the performance, “They marched in sync when the band turned the corner. They seem really well trained.” Pauline said, “Their performance is great and I’m impressed.” When asked whether they’d heard about Falun Dafa before, they both said that they received fliers so they knew a little about it. At first they thought that it was a practice which originated in the West. Later they learned that Falun Dafa is an ancient self-cultivation practice first taught in China in 1992. 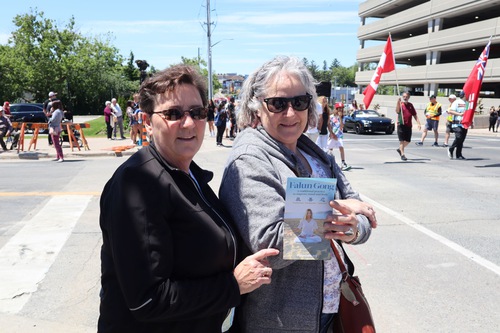 Claudia and her husband clapped and cheered in time to the music when the Tian Guo Marching Band rounded the corner. After she learned that all the band members are Falun Dafa practitioners who strive to live according to Truthfulness, Compassion, and Forbearance, Claudia said that those principles were important to society. “Without them people will be lost. People need to interact with compassion and respect,” she affirmed. 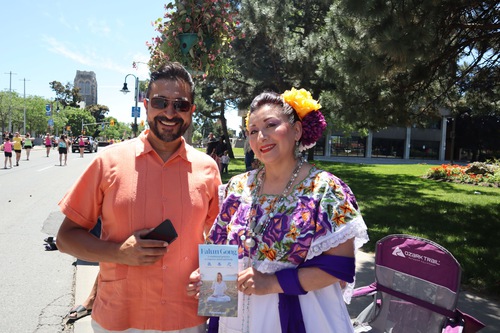 When Miranda and Linda sat in front of their home and saw the exercise group go by, they began to mimic the practitioners’ movements. “When I saw them demonstrate the movements, I was curious and wanted to learn. It says on the flier that there is a free class, which is perfect for me. I can’t wait,” said Miranda. Linda said that she would like to try to meditate, “I want to learn Falun Dafa as well. I think meditation is perfect for me.” Miranda said that the world needs Truthfulness, Compassion, and Forbearance, especially Forbearance. “I think our society lacks it,” she remarked.

Ricky watched the parade with his family. When he heard the basic information about Falun Dafa, he said he believed that the principles it teaches can benefit society. “People nowadays need to have more compassion and clean thoughts. Meditation allows a person to understand himself better and clear his thoughts so that he can have positive energy.” He said that he would read more about Falun Dafa online. 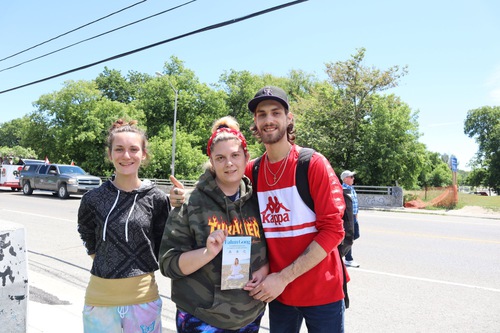 Ricky (right) believes that the principles of Falun Dafa can benefit society.

“Clarifying the Facts about Falun Dafa to My Family Members”