(Minghui.org) Today's news from China includes incidents of persecution that took place in 13 cities or counties in 8 provinces, where at least 22 practitioners were recently persecuted for their belief. 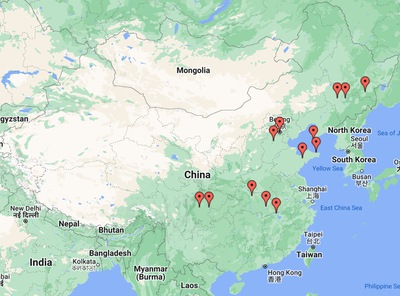 Ms. Huang Hongwei and Ms. Luo Yuanying from Qiaokou District will be tried online for the second time on the morning of June 17, 2022.

Ms. Zhang Fang from Xinyuanli Community in Chaoyang District was reported to police for talking to people about Falun Gong on a bus and was arrested on March 9, 2022. She was placed under official arrest in early June 2022 and is currently detained in the No.1 Detention Center in Dougezhuang Township.

Ms. Guan Huanyu was arrested by five officers including Liu Yansong, deputy of the Rixin Street Police Station in Xigang District, on the afternoon of June 2, 2021. Her home was ransacked. The police confiscated a photo of Falun Gong’s founder, her Falun Gong books, computer, printer, etc. Ms. Guan was denied admission by the detention center because of the result of a medical exam. However, she was detained for 14 days in a dark room of a hostel by the officers from the Rixin Street Police Station. Afterward she was placed under residential surveillance.

Her case was submitted to the Xigang District Procuratorate in September 2021. She was told at her home in December 2021 that her status was that she was on bail pending trial.

Officer Shen Zhi from the Rixin Street Police Station called Ms. Guan to the police station on May 12, 2022, and told her that she would be charged in August or September 2022.

Ms. Xu Aiqin lives in the Bizi Village, Gushan Town, Economic District. Officers from the Gushan Town Police Station went to Ms. Xu’s home around 5 a.m. on June 29, 2021. They arrested Ms. Xu and took her to the Weihai Detention Center. Ms. Xu was detained for 10 days. Since then, Ms. Xu has been harassed by local police, the local village office, or the local town government almost every month. Many officers repeatedly came to her home. They would search around and take photos.

Ms. Li Zhihui, over 70, has been harassed constantly by Li Xuejun, head of the Domestic Security Division of Fancheng District, since the end of last year. She was recently told that she was placed under 15-day administrative detention, to be executed at home.

Mr. Yan Guoheng was arrested by officers from the Shuangji Police Station on the morning of June 8, 2022, when he was just about to go to work. His home was ransacked and all his Falun Gong books were confiscated. The police videotaped the entire process with their body cameras.

Mr. Li Xiangzuo, Mr. Zhang Xiaolin and Ms. Chen were also arrested on the same morning. Their homes were ransacked and their Falun Gong books were confiscated. Two of them were released on bail pending trial.

After the police ransacked Mr. Hu Zichun’s home in the Lijiazhuang Village, Yaocun Township of Dingxing County on March 23, 2022, they went to Ms. Shen Ying’s home in Gucheng County a few days later. Ms. Shen Ying is the daughter-in-law of Mr. Hu Zichun. The police ransacked Ms. Shen’s home and confiscated her computer and 50,000 yuan in cash. Ms. Shen was detained for a few days in a brainwashing center in Xiaocun of Dingxing County. The money the police confiscated has not been returned.

Four officers went to Ms. Li Hongjun’s home at 9 a.m. on June 7, 2022. They searched Ms. Li’s home and took her to the police department for interrogation. Ms. Li was released in the afternoon.

Mr. Li Haifeng was taken from his home on June 8, 2022. His home was ransacked. His personal belongings were confiscated including his Falun Gong books, computer and printer. He was released later that day.

Ms. Cao Shujie was taken from her home on June 8, 2022. Her home was ransacked and her Falun Gong books were confiscated. She was released on the same day. The police repeatedly called her husband that day.

Ms. Zhang Suying lives in Baodun Village, Xinping Town, Xinjin District. She was harassed at home by Li Guanghua from the local community office and two other people on May 14, 2022. They photographed Ms. Zhang. When Ms. Zhang went to the Xielin Elementary School to pick up her grandson around 4 p.m., one day at the end of May 2022, a man in a police uniform photographed her for about 5 minutes and then left in a police car.

Ms. Zhou Yuping lives in the same village as Ms. Zhang. She was harassed at home by Li Guanghua and two other people on May 14, 2022. They photographed her.

A staff member from the Wanjie Community of Xinping Town, Xinjin District, and an official from Dongdaqiao Village went to Ms. Zhou Dingchun’s home at the end of April 2022. Ms. Zhou was not at home but her husband was. The two entered Ms. Zhou’s room and searched it.

Ms. Zhou Meili was arrested by officers from the Xi’er Road Police Station around 3 p.m. on June 11, 2022, for talking to people about Falun Gong in Xi’er Road. She is currently detained in the police station.

Ms. Li Yurong, 71, and Ms. Lu Shubi, over 70, were walking on the road to the vegetable market in Luyin Street when officers from the Nanjin Road Police Station stopped them. They were forcefully taken to a police car. They were placed in separate rooms in the police station and interrogated. Seven hundred yuan in cash Ms. Lu had was confiscated. Their homes were ransacked. The police confiscated four Falun Gong books and several truth-clarifying materials from Ms. Li’s home, and the Falun Gong books and a media player from Ms. Lu’s home. The two practitioners were released around 6 p.m.

Several officers went to the home of Ms. Liu Shulan’s daughter around 11:30 a.m. on October 27, 2020. Ms. Liu lived with her daughter. They ransacked the home and confiscated two cell phones, two MP3 players, four photos of Falun Gong’s founder, all her Falun Gong books, Ms. Liu’s ID, etc. Ms. Liu was taken to the police station for interrogation. She was denied admission by the detention center due to the result of the medical examination and was released the next evening on October 28, 2020.

Ms. Liu’s daughter and son-in-law were tricked by police and took Ms. Liu to the police station on December 15, 2020. They were told just to go through some procedures but Ms. Liu was arrested in the police station and was taken to the Sickness Ward in the Changchun Central Hospital. She was handcuffed to the bed and was pressured to write the three statements. Within ten days, Ms. Liu was under so much pressure that all her hair turned white and she lost eight pounds. She eventually gave in and wrote the three statements.

Ten officers from the Chengguan Police Station and the 610 Office went to Ms. Xu Guiyun’s home on the morning of May 3, 2008, when Ms. Xu talked to two technicians about her own factory. The police arrested three of them. The two technicians did not practice Falun Gong and were released later. The police threatened the technicians and the professor not to work with a Falun Gong practitioner, causing Ms. Xu’s factory to close.

“Once Incarcerated for 13.5 Years, Jiangxi Woman Arrested Again for Her Faith”