(Minghui.org) An 88-year-old woman died two hours following her arrest on April 13, 2022, for practicing Falun Gong. The police prevented her family from ordering an independent autopsy and withheld the death certificate. Her body is being held in a funeral home. 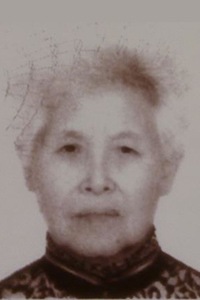 Ms. Cui Jinshi was reading a Falun Gong book at home on April 13, 2022, when several officers broke in and arrested her. While two young officers held her on the sofa, others searched her home and took her Falun Gong books, photo of Falun Gong’s founder, and an unknown amount of cash.

Ms. Cui tried to stop the police from taking her belongings. In despair, she fell. She kept saying to the police, “Don’t take my books away! Don’t take Master’s photo!”

Two officers dragged Ms. Cui from her apartment on the second floor to the ground floor. Then they suddenly let go of their grip, causing her to fall on the ground.

At 5:45 p.m., Ms. Cui’s second son, Mr. Piao Hu, got a call from the police telling him his mother had been taken to the 242 Hospital emergency room. He rushed to the hospital. While the police were still ordering him to pay for his mother’s medical expenses, the doctor came over and pronounced Ms. Cui dead. Mr. Piao went into the operating room and saw Ms. Cui’s body. Her face was pale, her throat was cut open, and she was only wearing one shoe.

When Mr. Piao was calling the family about Ms. Cui’s death, the police ordered a local funeral home to take her body away. Although her family arrived before the hearse left, the driver refused to let them take a close look at Ms. Cui’s body.

Escorted by the police cars, the hearse sped away. Ms. Cui’s family followed it to the funeral home, only to be stopped at the door and not allowed to see the body.

Not until two days later on April 15, were Ms. Cui’s family allowed to see her body, with close monitoring by the police.

Now two months after Ms. Cui’s death, her body is still kept at the funeral home. As the police refused to provide her death certificate and any other paperwork, the family is unable to order an independent autopsy or even cremate her body to let her rest in peace.