(Minghui.org) Falun Dafa practitioners held an Information Day in Saint Pölten, Austria on Saturday, June 4, 2022. They demonstrated the exercises, introduced Falun Dafa and collected signatures on a petition to help stop the ongoing persecution of Falun Dafa in China. 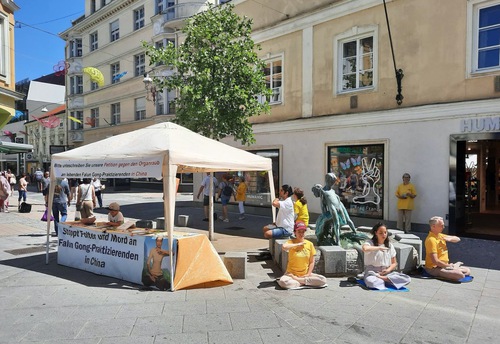 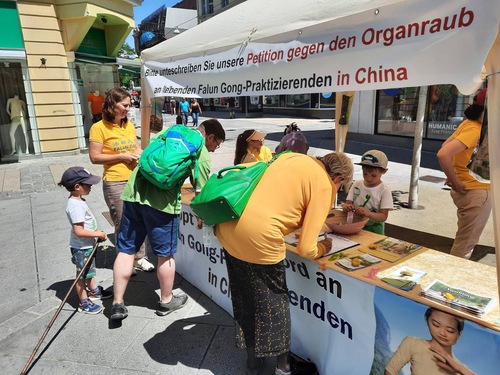 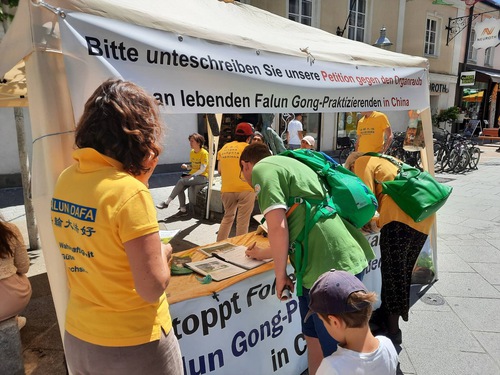 Locals sign the petition after learning how Falun Dafa is persecuted in China.

Saint Pölten is one of the oldest cities in Austria. Its Baroque architectural buildings and various museums make it a popular tourist attraction. Local residents were also enjoying the fine weather, shopping at stores or enjoying a cup of coffee.

When the practitioners started demonstrating the Falun Dafa exercises, many people stopped at the booth to learn about it. Locals happily accepted Falun Dafa truth-clarification materials and asked about the free online Falun Dafa classes.

Passersby stopped and listened as practitioners talked about the ongoing persecution. Practitioners in China are persecuted simply for believing in Falun Dafa and are illegally detained. The petition was filled quickly with signatures. Some tourists saved Falun Dafa’s informational website (www.falundafa.org) and researched about Falun Dafa on their cellphones.

A man said that he practiced martial arts and was very interested in learning more about Falun Dafa. Many people riding bicycles stopped and listened to learn more. A gentleman watched practitioners for a time, and a lady asked about Falun Dafa’s teachings.

A couple hurried over when the activity was about to end and asked to sign the petition. They said, “We need to help stop the forced live organ harvesting in China.”