(Minghui.org) Today's news from China includes incidents of persecution that took place in 7 cities or counties in 3 provinces, where at least 20 practitioners were recently persecuted for their belief. 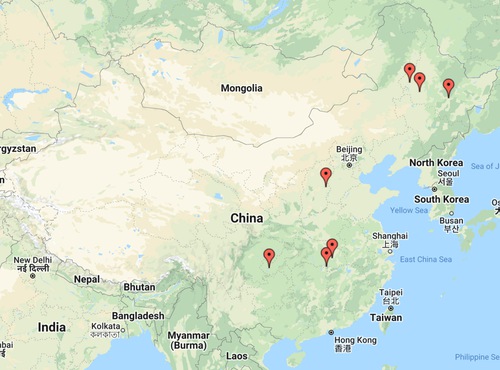 Luo Rongbi (gender unknown) was arrested on the morning of April 20, 2022. The details of Luo’s situation are not known.

Around 6 a.m. on April 20, 2022, Ms. Yuan Lixue heard someone knocking on the door. When she opened it, three plainclothes officers rushed in. One of them took out a search warrant. They confiscated her ink-jet printers, laptops, over 10 booklets, Falun Gong keepsakes, and all her Falun Gong books. They took Ms. Yuan to the Huizhan Police Department in the Sartu District. Ms. Yuan was released and taken home after 11 a.m. that morning.

Ms. Zong Ming, about 60, from the Qiaokou District was arrested. Her whereabouts are unknown.

Liu Xingyun (gender unknown) returned home from grocery shopping at 10 a.m. on April 18, 2022. As soon as Liu unlocked the door, three fully equipped police officers from Daqing City showed up. They claimed that someone had reported Liu for practicing Falun Gong. They confiscated a copy of Zhengjian Weekly published in 2019 on the couch and two Minghui calendars in the drawer of the tea table.

When Ms. Zhou from Fenghuangwan Residential Community in the Jiangbei District opened the door on the morning of April 6, 2022, to go to work, seven or eight police officers barged in. They ransacked her home and confiscated her Falun Gong books, computer, printer, and printed materials. The officers took her and her husband to the Dayanggou Police Station in the Yuzhong District.

The police claimed that Ms. Zhou had been reported for distributing Falun Gong materials, and they identified her in surveillance videos. The couple was released in the afternoon. Ms. Zhou has since received a summons from the local police station.

Mr. Zhang Xiaolin and a married couple were arrested on April 13, 2022, by police who were staked out, waiting to catch practitioners. The officers went to Mr. Zhang’s home and ransacked it. They also arrested Ms. Liu Ying when she went to Mr. Zhang’s home. The officers then ransacked Ms. Liu’s home. Due to pandemic prevention and control, the detention center refused to accept them. All four practitioners have returned home.

Donghu Police Station officers broke into Ms. Wang Fajuan’s home around 7 a.m. on April 20, 2022. They arrested her, her husband, and their three-year-old granddaughter. They ransacked the place and confiscated all their Falun Gong books and materials. The police planned to detain Ms. Wang’s husband and release her on bail. Due to the pandemic, both of them were released at noon.

Ms. Zhou Guilan from the Yinyi area was arrested by Ranghulu District Police officers around 7 a.m. on April 20. The details of her situation are not known.

Ms. Ouyang Hongmei, about 75, lives alone. Her friends have not been able to contact her since March 23, 2022.

Ms. Zhen and Ms. Weng were also arrested on April 13, and a few other practitioners were still under surveillance.

The police first called the practitioners and claimed that they had been in close contact with people who had COVID-19. The officers asked for their addresses and then went and arrested them. So far, many practitioners, including Ms. Wang Xiuling and an elderly couple, have been arrested.

“Overcoming Many Tribulations with Righteous Thoughts”

“Some Thoughts on Ridding Ourselves of Party Culture”