(Minghui.org) During the week of April 26 through May 1, 2022, Shen Yun Performing Arts presented the beauty of pre-communist China including touching stories from the past to the present in nine cities in Austria, Germany, Australia, and the United States. 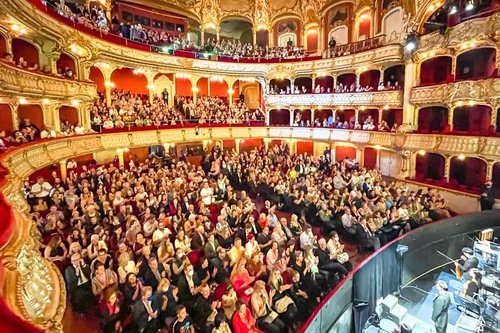 The Shen Yun New York Company at a packed house at the Graz Opera in Graz, Austria, on the afternoon of April 30. The company presented four performances in Graz April 28–30. (The Epoch Times) 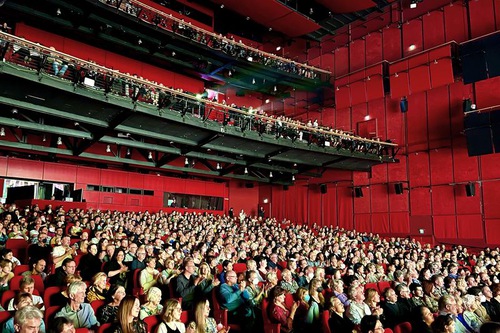 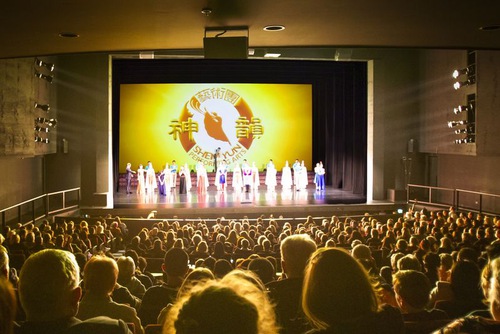 The Shen Yun International Company at the Ulumbarra Theatre in Bendigo, Australia, on April 30. The company presented two performances in Bendigo April 30–May 1. (The Epoch Times) 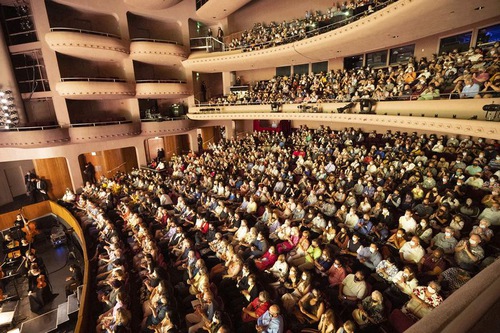 The Shen Yun Global Company at the McCallum Theatre in Palm Desert, California, on the evening of April 30. The company presented four performances in Palm Desert April 28–30, all to packed houses with the last two performances sold out. (The Epoch Times) The Shen Yun North America Company at a packed house at the Rosemont Theatre in Rosemont, Illinois on May 1. The company presented four performances in Rosemont April 29–May 1. (The Epoch Times) 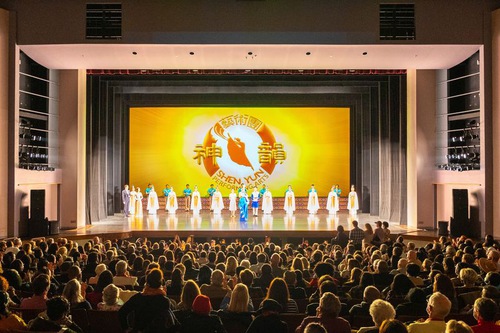 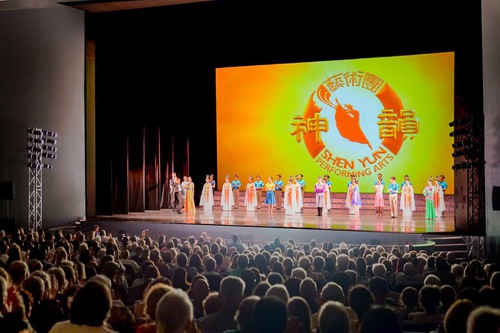 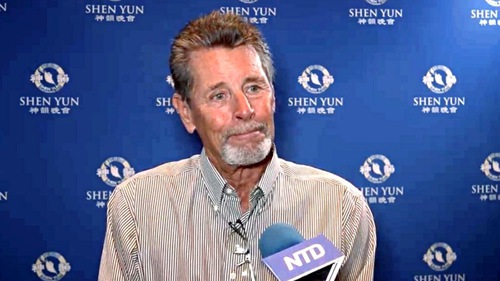 “I just like the choreography. [I’ve] worked on a lot of dance shows, and I appreciate the talent,” said Mr. Dahlquist, who spent 50 years working in Hollywood prior to retiring.

“It’s just amazing that they are... in step—all in unison, always. Nobody’s missing a beat. Pretty impressive.

“I think it’s important... that we understand a lot of this could not be seen in China today. And [it’s] very, very disturbing and sad that that happens [while] in America we’re able to watch this and enjoy,” he said. 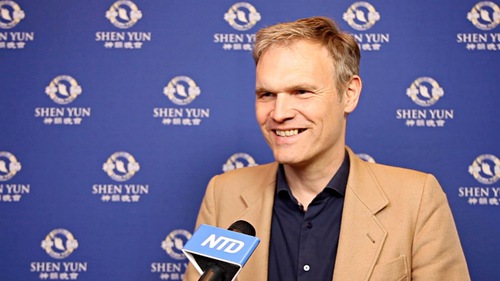 Robert Cibis at the Shen Yun performance in Berlin on April 29. (NTD Television)

Robert Cibis, a director, producer, and distributor of documentary and theatrical films, saw Shen Yun in Berlin on April 29.

“The whole artistic presentation reached an extremely high level. The dancers’ artistic level, of course including the level of the production of the entire performance, was impressive. What especially amazed me was the precision of the dancers’ movements. Ten or eleven people reaching such precise uniformity in a dance performance, this is an unbelievable achievement,” said Mr. Cibis, who co-directed the award-winning documentary “Pianomania,” and was a co-recipient of the Ekotopfilm 2007 prize.

“This kind of technology that integrates the stage with the backdrop is extraordinary. It was so smooth that the animated scenes and the real stage scenes were completely merged. This is a production method that interests me very much,” he said. 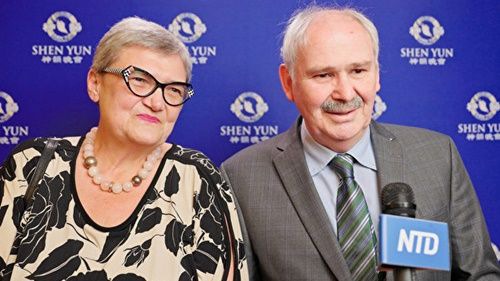 “Really phenomenal!... I was already impressed when I received the prospectus in Vienna and I was particularly pleased that it was taking place in Graz because we are from Graz,” Marlies said.

“It touches, inspires, you can hardly believe it... Really overwhelming,” she said. Marlies said that you don’t know where to look exactly, “because there is always something new to see.”

“I sat relatively far in front and the expression of the dancers and the facial expressions, the gestures alone were simply phenomenal,” she said.

For Paul, the performance was something special: “It touches the soul.”

“We will definitely recommend Shen Yun. The show was really wonderful. We would be happy to see you again,” he said. His wife confirmed: “It was a really phenomenal evening.” 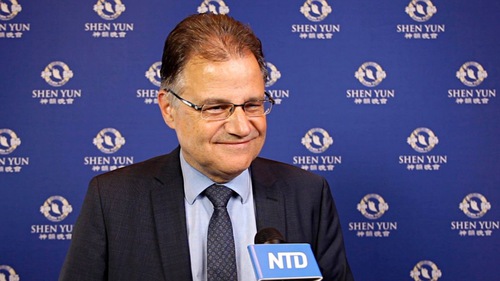 Jürgen Braun at the Shen Yun performance in Berlin on April 28. (NTD Television)

Jürgen Braun, a human rights spokesman and a member of the German Federal Parliament (Bundestag), saw Shen Yun in Berlin on April 28.

“I’m very impressed with the athletic performances and the artistic expression... I can appreciate how incredibly strong the athletic ambition is and the high [quality] performance,” Mr. Braun said.

“Everything is really so harmonious and... elegantly presented and also humanly moving at the same time.”

Mr. Braun was fascinated by the company’s patented method of integrating a 3D-animated backdrop with the stage performance. “You’re always swinging between the animation and real life, and that’s impressive... Very cleverly combined with modern technology,” he said.

“Thinking of higher values, thinking of a meaning of life in religion [is] something that connects all people in this world and I am very impressed with what is being achieved here.

“I can understand that people who are particularly moved by their worldview are, therefore, also capable of particularly high achievements. And to act together with a lot of discipline and joy of life, that’s really great.

“What diversity, what life there was in this great China... This long, long Chinese history before communism, before the seizure of power by the Chinese Communist Party happened,” Mr. Braun said.

He also shared his thoughts on the pieces about the ongoing persecution of Falun Dafa. “We have to talk about that and we have to educate about that [persecution] because the Communist Party of China does not adhere to the rules that are simply valid worldwide and... have nothing in common with the tradition of the Chinese culture,” Mr. Braun said.

“The Chinese Communist Party has destroyed a lot of a great culture, you just have to emphasize that.

“Despite how many years of persecution and severe suffering... they hold on to this peaceful form of protest... They maintain their tradition, their values, in a peaceful way.

“I can only encourage them, that is a model for many, many other human rights movements in the world,” he said. 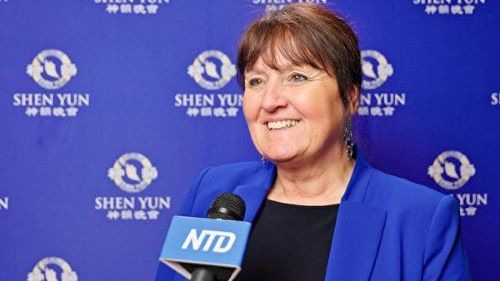 Manuela Khom, the President of the State Parliament of Styria, saw Shen Yun in Graz, Austria, on April 29.

Regarding the fact that Shen Yun’s program is inspired by China’s 5,000-year-old civilization, she said, “That came across well... We don’t deal enough with the culture that was actually lived in China.” During the performance, she became aware of “how colorful it actually was in China in the past and how much joy these people traveled with,” she said.

The interplay between the animated backdrop and the action on stage also appealed to Ms. Khom. “The connection between the new technique and the dances - that’s something very, very special,” she said.

In the spiritual area, she emphasized that the company stands behind what its artists believe in. Today they stand up for something that they “unfortunately can no longer live like they did back then... But I believe that this is still there inside people,” she said.

Ms. Kohm said that she would “definitely recommend” the show. “I would really miss something if I hadn’t seen it,” she said. 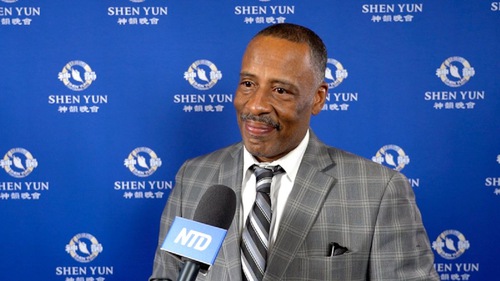 “Fantastic display of art, color, and music... It just touched my heart... It was really awesome and refreshing,” Mayor Roudez said.

He also expressed amazement over the company’s patented stage-backdrop integration method. “It really blows my mind when they come out of the scene, they just disappear and go into the space. That’s awesome!” he said.

“To the Chinese people who don’t have an opportunity to see this performance, you’re missing out on something really, really good. And if there’s any way that you can find a way to see it, please do. You will love it,” Mayor Roudez said.

“It is something that is a must-see. It’s a lifetime experience,” he said. 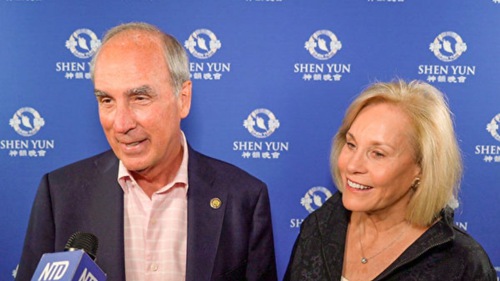 Mayor Sandy Stimpson of Mobile and his wife Jean at the Shen Yun performance in Mobile, Alabama, on April 30. (NTD Television)

Sandy Stimpson, mayor of the city of Mobile, and his wife Jean saw Shen Yun in Mobile, Alabama, on April 30.

In “one word,” he said, Shen Yun is “Spectacular!”

Mayor Stimpson said that from the moment the curtain rose in the first scene, “I was like, ‘Wow, this is amazing!’ I mean, it was breathtaking.”

Jean also said she thoroughly enjoyed the performance and appreciated the calm energy from Shen Yun. “I loved the peace and the harmony that it is all throughout,” she said.

Mayor Stimpson said that he enjoyed Shen Yun’s artistic presentation of the stories of ancient Chinese culture. “In our culture, there’s so much we certainly don’t understand about the Chinese culture... So it’s just been very, very enjoyable,” he said.

He said he was inspired to see the performance after reading a newspaper article about Shen Yun presenting story-based dances depicting the persecution of Falun Dafa.

“I’ve just seen the brochure, and read a little bit about it and I thought this would be something I think I would enjoy... And then I saw a newspaper article about it... about some of the persecution... and that inspired me also to want to come,” he said.

“I think there’s political conflict all around the world and so I just like to see people that are not oppressed to be able to have their freedom... That’s what I would be in support of,” he added.

As mayor of the city of Mobile, he wanted to express his gratitude and delight to Shen Yun for performing in the port city.

“Congratulations on the splendid performance. And we’re delighted that you’re in Mobile. And thank you for what you’re doing. And God bless,” Mayor Stimpson said. 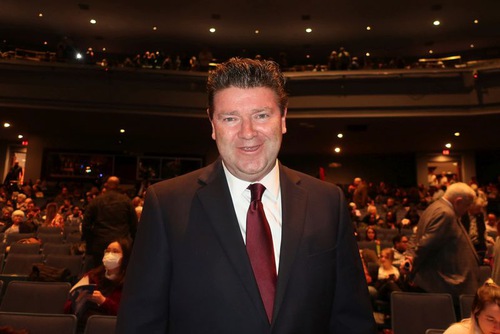 Jim Whelan at the Shen Yun performance in Rosemont, Illinois, on May 1. (The Epoch Times)

Jim Whelan, the president of a biochemistry company, saw Shen Yun in Rosemont, Illinois, on May 1.

“We’re blessed to be able to see a performance like this,” Mr. Whelan said.

Besides the visual feast, he also discovered in the performance certain values in traditional Chinese culture, “About family, faith, distinguishing between good and bad, kindness and evil, and making sure not to ignore important things in life. Everyone can benefit from messages like these,” he said.

“Illnesses Are Not Scary, But Drifting Away from Dafa Is”