(Minghui.org) Today's news from China includes incidents of persecution that took place in 7 cities or counties in 6 provinces, where at least 12 practitioners were recently persecuted for their belief. 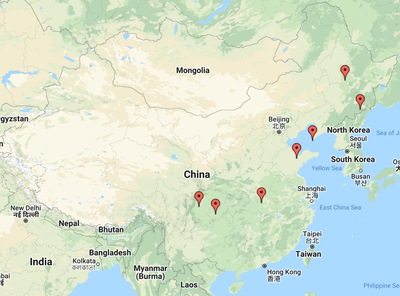 Ms. Yu Meixia from Changle County was reported to the police and arrested for talking to people about Falun Gong on February 4, 2022. She was scheduled to be tried via video link by the Qingzhou City Court at 2:30 p.m. on April 27.

Mr. Zhang Jianhua, Ms. Tian Hongmei, and Ms. Feng Yuqin from the Tongnan District were reported to the police by a student when they talked to students about Falun Gong in Binjiang Park on the afternoon of April 16, 2022. They were arrested. The police ransacked Ms. Tian’s home that evening and confiscated a copy of Zhuan Falun. The location where the three practitioners are being held is unknown.

Yu Suhua, 70, and Yi Tianfu, 78, from the Chenghua District were arrested at Yi’s home by officers from the Longquanyi District Police Department and the Shiling Police Station on April 14, 2022. The officers confiscated two laptops, a cell phone, an MP3, printed materials, and over 6,000 yuan in paper bills with Falun Gong facts printed on them, among other personal belongings.

The officers interrogated both practitioners. In the end, the police gave Yu 14 days of administrative detention, which was not carried out as Yu was over 70 years old. Both Yu and Yi returned home on April 15.

Mr. Tao Zhanwu, 81, lives in Aixiang Village, Gongzheng Township. On April 14, 2022, some strangers broke into Mr. Tao’s home and confiscated photos of the founder of Falun Gong. Mr. Tao and his wife refused to sign statements renouncing their belief. These people said they would no longer harass the family and coaxed the couple’s son into signing the paperwork on behalf of his parents.

The Yunmeng County 610 Office instructed eight people, including officers from the Shuilu Police Station in Chengguan Town and director Xu of the town government, to break into Ms. Liu Jinhua’s house on April 11, 2022. They arrested Ms. Liu and took her to the Hujindian Town Brainwashing Center.

At the same time, they also wanted to take two other practitioners to the brainwashing center. It was reported that one of the two practitioners left home as a result of excessive harassment.

Ms. Yu Chunxiang was arrested by officers from the North Square Police Station at the Dalian Railway Station and the Xigang District Police Department while talking to people about Falun Gong on April 24, 2018. Her home was ransacked. She was sentenced to four years in prison by the Xigang District Court and was taken to the Liaoning Province Women’s Prison. Ms. Yu was abused in prison for refusing to cooperate or be transformed. The prison officials did not allow her to make phone calls or meet with her family.