Home > Persecution > Accounts of Persecution
71-Year-Old Man Jailed 3.5 Years for Upholding His Faith, Pension Suspended After His Release
May 5, 2022 | By a Minghui correspondent in Gansu Province, China

(Minghui.org) A 71-year-old resident of Zhangye City, Gansu Province was released in November 2020 after serving three and a half years for upholding his faith in Falun Gong, a mind-body practice that has been persecuted by the Chinese Communist Party since July 1999. Ms. Ma Zhongwen was subjected to various forms of torture and brainwashing sessions while jailed at Lanzhou Prison. And the persecution continues after his release. Currently his pension has been suspended and he was ordered to return the pension funds issued during his incarceration.

Mr. Ma, a retiree of Zhangye City Nuclear Industry 796 Mine, lives in Residential Area 796 of Ganzhou District in Zhangye City. He was weak and had many diseases since childhood. He tried various qigong without much effect until 1997 when he started practicing Falun Gong. Gradually, not only his character improved but also his health recovered. He has been disease-free for many years.

After the persecution of Falun Gong began in July 1999, Mr. Ma has been targeted for upholding his faith. His home was ransacked multiple times. He was once held at a brainwashing center, given forced labor, and later sentenced to prison.

About a month later on June 16, the Ganzhou District Procuratorate approved his arrest. In August that year, Mr. Ma was sentenced to 3.5 years by the district court. He was ordered to serve time at Lanzhou Prison.

Torture and Brainwashing in Prison

The prison guards had long used felons and murderers to “work on” practitioners with violence. The perpetrators were rewarded with reduced sentences or parole in return.

The inmates tortured Mr. Ma in a room without surveillance cameras. Sometimes they even beat him in front of the surveillance monitors. The guards told the inmates, “We don’t care what methods you use, and we only care about the results (i.e how many practitioners renounced their faith)” 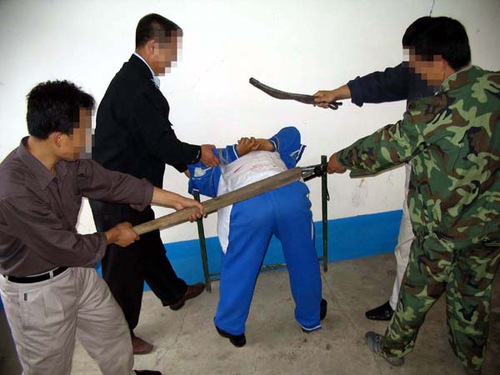 Mr. Ma was once forced to stand still for three days and nights. If he dozed off, the inmate would slap him in the face and hit him in the eyes.

During the day, the inmates forced Mr. Ma to answer roll call in a squat position. They also forced him to memorize the 48 prison rules. Due to long time standing, Mr. Ma’s legs became swollen and he couldn’t squat down. The inmates then kicked his legs, stepped on his feet and toes, pinched his scalp and beat him on the nape of his neck. Mr. Ma’s legs turned black and purple.

In the following days, the inmates intentionally kicked his legs. The pain was unbearable. Mr. Ma couldn’t walk at all.

At night, after the inmates went to bed, Mr. Ma was forced to write down his thoughts and to copy the prison rules, otherwise he wouldn’t be allowed to sleep.

Sometimes Mr. Ma had to stand until 2 a.m. or 3 a.m. before being allowed to go to bed. But he was still forced to get up at 5 a.m. to dump and clean the chamber pot.

There was one torture dubbed “climbing the wall.” Mr. Ma was forced to stand a few centimeters away from the wall with his ten fingers touching the wall while his open palms must not touch the wall. After a while, Mr. Ma’s body trembled badly and his fingers became numb.

Between May and September every year, the prison posted slogans and played videos defaming Falun Gong. All inmates were tested on these slanderous contents and Falun Gong practitioners were forced to write daily thought reports.

In addition, Falun Gong practitioners were forced to “report” anything and everything to the inmates, including going to the bathroom. When guard Ma Zhili saw Mr. Ma in the bathroom, he was not happy and scolded the inmates, “Why did you give him so much to eat and drink?” In fact Mr. Ma had only one steamed bun and a half cup of water each meal. Mr. Ma was not allowed to see or call his family. And for a long time guard An Xiaofeng didn’t allow him to buy any daily hygiene supplies and food.

In addition to the aforementioned Wang Shiying, head of the local domestic security office, police officer Chang Guochao also participated in the persecution of Mr. Ma. He once slapped Mr. Ma in the face while he was detained at the detention center.

Lu Liling (phone: 86-18993650612) from the local residential committee actively cooperated with the police to persecute practitioners, including Mr. Ma.

Some officials of the 796 Mine Management Committee, including Wu Yongping, Li Jianjun, Han Bin, Zhang Songnian (phone: 86-13993692669), and Liu Hongyan (phone: 86-13993681727), actively cooperated with the 610 office to persecute Falun Gong practitioners. After Mr. Ma was released from prison, they ordered him to return the pension payments issued to him during his imprisonment.