(Minghui.org) Today's news from China includes incidents of persecution that took place in 16 cities or counties in 9 provinces, where at least 15 practitioners were recently persecuted for their belief. 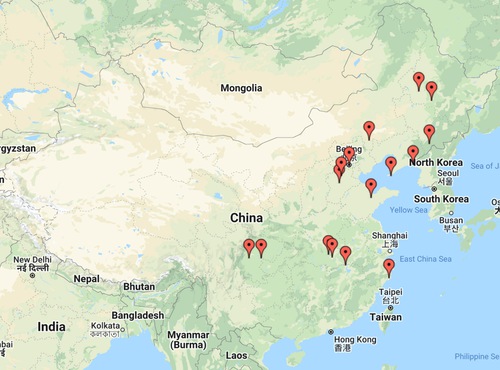 Mr. Chen and Ms. Yao were arrested by more than 10 officers from the Anju District Domestic Security Division and the Fenghuang Police Station on the morning of September 29, 2021. The officers ransacked their home and seized a desktop computer, a notebook computer, two printers, dozens of Falun Gong books, and other items. Ms. Yao was released on bail that afternoon. Mr. Chen was held in the Suining City Detention Center (also known as the Yongxing Detention Center).

They were arrested after they were reported for distributing Falun Gong flyers. The Anju District Procuratorate filed charges against them with the Anju Court.

Mr. Wang Houji was arrested by officers from the Bayilu Police Station during a massive arrest of practitioners in the Dalian area on June 2, 2021. He was sentenced to three years in prison. He has appealed.

Ms. Li Yanyun and Lu (gender unknown) of the Xinchao area and Ms. Li Yaru from the Huijing Community were arrested around 6:00 a.m. on April 20, 2022.

Ms. Yu Shoufen from the Zhongshan District talked to people about the persecution of Falun Gong in Haibin Park in Fujiazhuang on the afternoon of February 9, 2022. A plainclothes officer reported her. She was arrested by Bayi Road Police Station officers who located her home from a shopping card found in her bag. They ransacked the place and seized her notebook computer, Falun Gong materials, and other items. They transferred her to the Xigang District Police Department. She was later taken to the Yaojia Detention Center. The Xigang District Procurator issued an arrest warrant for her on March 30, 2022.

Mr. Zhang Jintao from Zhangjiawan, Yunmeng County, was looking for work in Ningbo City, Zhejiang Province, on the morning of March 7, 2022, when he was detained at the security checkpoint in the East Yunmeng Railroad Station. East Station Police Station officers confiscated his two cell phones and took him to his home. The Zhangjiawan security director ordered him to stay home and seized his identity card. Mr. Zhang left home to avoid being persecuted. His family and fellow practitioners have now lost contact with him.

Ms. Wang Huimin was arrested in an open market on December 21, 2020. She was released on bail due to health reasons. She was tried in the Jinzhou City Court on October 27, 2021. During her self defense, she pointed out that the charges in the indictment were false and the evidence was fabricated. The prosecutor could not respond. The court adjourned. The judge told the procuratorate to submit additional evidence.

The court reconvened on February 22, 2022. Her attorney entered a not-guilty plea. Her son, as a relative defender, defended her in court. The court suspended the trial because of her poor health.

Shen Hua (gender unknown), who lives in Weixiuyuan at Beijing University, was harassed at home by officer Zhang Yanhui from the Yanyuan Police Station, Beijing University, and an assistant officer after 10:00 a.m. on April 22, 2022. The officer photographed Shen and said it was because “April 25” was approaching. On April 25, 1999, Falun Gong practitioners held a peaceful appeal in Beijing. Since then, the police monitor practitioners very closely each year around April 25. The officer called after 3:00 p.m. They said they were looking for Shen’s mother, and wanted to photograph her.

Mr. Shen Xiao, Shen Hua’s younger brother, was arrested at home on August 4, 2021. He has been held in the Haidian Detention Center for nearly nine months. He sent a message about freedom of religion and the freedom to practice Falun Gong to officer Zhang Yanhui in May 2021. The police went to his home on August 4, 2021, and ransacked it. They seized two cell phones and two computers worth over 20,000 yuan. His items were not returned.

Mr. Zhan Nanzheng was harassed at home by clerks from his community around 11:30 a.m. on April 21, 2022. At 2:30 p.m., officer Zhang from the Huangmei Police Station and more than ten others went to his home and seized a picture of Falun Gong’s founder and Falun Gong books and materials. Several of them dragged him to a car and drove him to the police station. He was tied to a metal chair and interrogated. He was finally released after 6:00 p.m.

Ms. Huang Qiaoyun from the Dongxihu District was arrested around April 21, 2022.

Elderly practitioners Ms. Wu Aicong and Ms. Yan Jianyun talked to people about the persecution of Falun Gong in Taihuacheng in the Fangzi New District after 7:00 a.m. on April 10, 2022. Someone reported them. They were arrested at the scene and taken to the Fenghuang Police Station. They did not comply with any of the officers’ demands. They were released around 5:00 p.m.

On April 15 and April 18, the two were harassed at home by Fenghuang Police Station officers who ordered them to sign documents. They refused to.

The arrests were carried out beginning at 6:00 a.m. and on into the afternoon. Most of the officers wore plainclothes. Some wore protective suits. They knocked on practitioners’ doors and pretended to be looking for people infected with the flu or investigating COVID-19 close contacts. The majority of the practitioners on the list were released.

Ms. Kong Qingju was arrested at home by Jiangyuan District police on February 16, 2022. Her home was ransacked. The officers seized her Falun Gong books, a notebook computer, cash, and other items. She was held for more than 30 days in the Heigou Detention Center and the Heigou Detention House. Procuratorate staff phoned her and told her to go to the procuratorate on April 17. On April 21, she was called to the procuratorate by officers and prosecutors. They asked if she still practiced Falun Gong. They said if she answered yes, she would be sentenced to two years in prison; if she said no, she would get one and a half years of probation.

Six officers from the Mulan County No. 2 Police Station broke into Ms. Mei Guangqin’s home after 4:00 p.m. on April 12, 2022. An officer showed his badge for a second, then walked around her home. He took down a Minghui calendar from the wall and seized three Falun Gong books that were laying on a desk. When Ms. Mei’s younger sister came for a visit, the officers searched her bag and seized her Falun Gong flyers. They arrested Ms. Mei and her sister and took them to the Mulan County Police Department. They asked the two when they started practicing Falun Gong, where they got their Falun Gong books, and if they had been punished or distributed flyers before. The sisters refused to sign or give their fingerprints on any police records. At 8:00 p.m., an officer brought a 15 days detention notification and ordered them to sign it. They refused again. The officer said, “Go home. It’s the pandemic.” They were released.

Shi Changqing (gender unknown) of Dongma Village, Mancheng Town, was arrested by officers from the Mancheng District Police Department on the morning of April 22, 2022. The officers ransacked the place and held Shi in the police department.

Ms. Tao Xinyu of Zhonghe Town has been under surveillance for months. Officers from the police department and the police station, as well as clerks from her community, were stationed in front of her home. Whenever she left home, they photographed her and followed her. They even followed her and videotaped her all the way to her daughter’s home.

Ms. Bao Lingling, in her 80s; Ms. Wang Mei; and Jinping (family name and gender unknown) are being held in the Wenling City Detention Center.

Mr. Luo Changyong of the Xindu District was arrested by three people who claimed to be from the Banzhuyuan Police Station at around 11:00 a.m. on March 15, 2022. He was held in the Banzhuyuan Police Station for 32 hours and released on bail around 7:00 p.m. the next day. He was suspected of posting handwritten notes that read, “Sincerely reciting ‘Falun Dafa is good, Truthfulness-Compassion-Forbearance is good’ will save lives in disasters!”

Officer Zhou Yujun from the Banzhuyuan Police Station and Chen Jinchuan from the Xindu Domestic Security Division searched Mr. Luo’s home on the afternoon of March 15 and decided to release him on bail. The notification had only a start date, March 15, but no end time.

Ms. Xu Shuzhen, 80, was arrested and taken to the Anmin Police Station on the morning of April 18, 2022, after someone reported her for talking to people about the persecution of Falun Gong. She was examined in the police hospital so they could admit her to the detention center. They said she would be sentenced.

Her son and grandson waited outside of the police station beginning at 2:00 p.m. on April 18 for her to be released. The officers took her back to the police station after the exam, and let her family stay with her overnight because of her age. They finally let her leave on April 19, but they ordered her to come back the next morning to finish the procedures.

She has been arrested many times. She was arrested by Linjiang Police Station officers in 2017 for distributing Falun Gong flyers. Her home was ransacked. She was released around 10:00 p.m. But she was repeatedly harassed by calls from officers and clerks from her community. Her phone was monitored. Her family members repeatedly received harassing calls.

She was arrested by officers from the Hamatang Police Station in March 2022. The officers wanted her family address. She was released in the evening. A police car followed her until she boarded a bus. Someone followed her as she switched buses but she managed to evade the person.