(Minghui.org) Today's news from China includes incidents of persecution that took place in 10 cities or counties in 6 provinces, where at least 13 practitioners were recently persecuted for their belief. 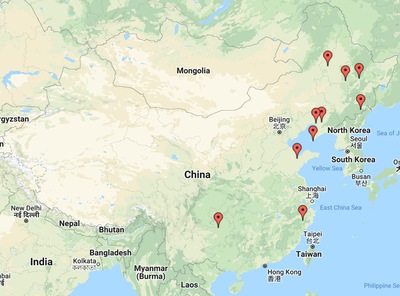 Ms. Zhang Siqin from the Paotai Sub-district, Jinpu New District, was arrested at home on January 19, 2022. Her family received a phone call from the Yaojia Detention Center at 6 a.m. on January 27 that Ms. Zhang, 69, died in the detention center.

Former political head Wang Shimin, who is now director of the Paotai Police Station, was responsible for arresting Ms. Zhang, and sending her to the detention center despite doctors’ advice not to, and her death in the detention center within eight days of being arrested.

On April 14, 2022, it was reported that Ms. Liu Ying from Tonghe County and a few other Falun Gong practitioners were arrested. Information about the police officers who carried out the arrests is not known.

Ms. Zhou Xiaozhen from Huzhen Town was reported to the police by a teacher at the Huchuan Primary School when she talked to people about Falun Gong on March 25, 2022. She was arrested and is being held in the Xiaoyun Brainwashing Center.

Mr. Zhang Xiaolin was arrested on April 13, 2022. The specific reasons and circumstances are unclear.

Ms. Li Guifeng from Yingcheng City, Hubei Province, was visiting her daughter in Guizhou Province and staying with her. She was reported to the police while talking to people about Falun Gong and posting Falun Gong materials on January 20, 2022.

Ms. Li was held at the police station and then transferred to the No. 1 Detention Center of the Xishui County Police Department. She spent 36 days in custody and has now returned home.

During her detention, Ms. Li was brutally persecuted. She was handcuffed and shackled, forced to sit on an iron chair, lifted off the ground, and beaten.

The police photographed her and pressured her to fingerprint paperwork.

Ms. Wu Aicong from Wujia Village was reported to the police when she talked to people about how to stay safe during the pandemic near the Taihuacheng area in Fangzi District around April 9, 2022. She was arrested and taken to the Fenghuang Police Station. She returned home the following day.

The officers ransacked her home and confiscated Falun Gong books, photos of the founder of Falun Gong, and audio players.

Ms. Jiang Xiulan’s husband received a call from a retirement office staff member of the Social Security Bureau in June 2020. The staff member asked Ms. Jiang to take the certificate with her date of release from prison to the police station and to sign the paperwork, otherwise, her pension would be suspended.

At that time, Ms. Jiang was taking care of her grandchild at her daughter’s home. She decided to ignore their demands and not cooperate. The Social Security Bureau began withholding Ms. Jiang’s pension in August 2020.

Ms. Hu Xiuhua was arrested by officers from the Dayu Police Station, Kuiwen District, while distributing information about Falun Gong on the morning of March 24, 2020. Her home was ransacked. The officers forced her daughter to pay 10,000 yuan and released her on bail. She returned home at 5 p.m. that day.

In March 2021, the police station called Ms. Hu to get the 10,000 yuan her daughter deposited. After she went there, the officers instead told her that she would be detained before they could return the money. After Ms. Hu clarified the truth to them about the persecution the detention center refused to admit her. The officers ended up returning 10,000 yuan back to her.

Ms. Guan Xiaofen from the Acheng District distributed Falun Gong materials in the Jixiang Village, Yagou Town, on the afternoon of April 1, 2022. She was reported to the police by Gao Dawei, a staff member of Jixiang Health Center, and Gao’s mother at a nucleic acid test results checkpoint. Director Ge and other officers from the Yagou Town Police Station arrested Ms. Guan and confiscated 900 yuan in cash and several booklets from her bag.

The Domestic Security Division took her away, ransacked her home, and confiscated about 200 Falun Gong books.

The officers said that during the pandemic detention was suspended. They would release her on bail and take her back into custody after the pandemic.

When practitioners Fu and Lin handed out flyers on April 7, 2022, with advice on staying healthy during the pandemic, they were caught on surveillance cameras. They were followed and arrested by officers from the Wenhua Police Station. The two practitioners were released on bail.

Ms. Wang Lihong from Shimiaozi Town, Xiuyan County, was arrested on November 22, 2014, for distributing desk calendars with Falun Gong content. She was sentenced to seven years in prison. She returned home in December 2021.

“Practitioners Walking on a Golden Conveyor Belt Made up of Falun”