(Minghui.org) Today's news from China includes incidents of persecution that took place in 10 cities or counties in 6 provinces, where at least 22 practitioners were recently persecuted for their belief. 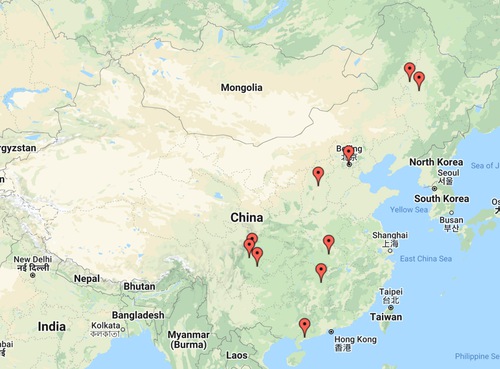 Ms. Liao Yuying lives on Daya Street, in Lintou Town of Dianbai District. Officers from the Daya Police Station and the Dianbai District Police Department, as well as local residential committee members, went to Ms. Liao’s home on the morning of April 21, 2022. They broke the lock after Ms. Liao refused to open the door. They arrested four people including Ms. Liao, Ms. Mai Weilian, Ms. Yu Qiong, and an elderly non-practitioner lady who was visiting Ms. Liao. Ms. Liao’s home was ransacked and her personal belongings, including the paper bills with Falun Gong facts imprinted on them, were confiscated.

The case against Mr. Yang Rongen was processed in the Chengdu Railway Transportation Procuratorate on the morning of April 21, 2022. Mr. Yang’s family member was asked to sign a guarantor document for bail pending trial, which stated that Mr. Yang was required to stay at home and not to go out casually. He could be summoned at any time between April 20, 2022 and April 20, 2023.

Ms. Gu Gongzhao from Qingquan Town in the Baijiang District was reported to police for talking to students about Falun Gong in a market and was arrested by officers from the Qingquan Town Police Station on April 13, 2022. She was interrogated in the police station and was threatened with being detained for ten days. She was released in the evening.

The next day three people from the police station and the local community office went to Ms. Gu’s home. They pressured her to sign a guarantee statement, which she refused. Her son signed it under pressure but she was forced to press her fingerprint on it.

Ms. Li Youlin works in the Baisha Town Health Center in Xiaochang County. She was arrested on the morning of April 20, 2022.

Ms. Qin Yali is being held in a detention center

Ms. Chen Jun works in the Xiangtan TV University. She was arrested at her workplace by staff from the Political and Legal Affairs Committee and technical forensic investigators on April 20, 2022.

Ms. Duan Xiaorong from the Donghu Sub-district was arrested by officers from the Tieren District Police Department on April 20, 2022. Her home was ransacked by twelve police officers. Her personal belongings were confiscated, including a photo of Falun Gong’s founder, a wall poster, Falun Gong articles, a computer, printer, and truth clarifying materials. Police also searched the home of Ms. Duan’s daughter. After finding a card with Falun Gong information, and a radio, her daughter was also arrested. Ms. Duan and her daughter were interrogated at the police department and were released later that day.

Practitioners Zhang, Li, and Cui were arrested on April 13, 2022. They were released later that day.

Ms. Qin was arrested by officers from the Beijuzai Police Station on April 13, 2022. Her home was ransacked. Her Falun Gong books, her ID, and bank book were confiscated. She was released on bail pending trial that evening. An older couple was also arrested at the same time as Ms. Qin.

Elderly Ms. Ma was arrested by officers from the Donghu Police Station on April 13, 2022. Nine officers ransacked her home and confiscated her Falun Gong books, a photo of Falun Gong’s founder, a computer, a media player, and memory cards.

Wu Wensheng from the Wulituo Police Station went to Mr. Liu Xingdu’s home on the morning of April 21, 2022. He video recorded Mr. Liu and threatened him with his pension and his family members’ futures.

Ms. Yang Zhengru is a new practitioner who lives in the Jingyang District. She was arrested for talking to people about Falun Gong on June 16, 2021. Her home was ransacked. She has been detained in the Deyang City Detention Center for more than ten months. She was released and returned home.