(Minghui.org) The third Sound of Hope Falun Dafa Cultivation Experience Sharing Conference was held on May 21, 2022. Ten Falun Dafa practitioners from Asia, Europe, and North America shared their experiences of eliminating attachments while participating in the media project and in their personal or family lives.

The participants said that they benefited a lot from participating in the conference, and they were moved by other team members’ cultivation paths and challenges. 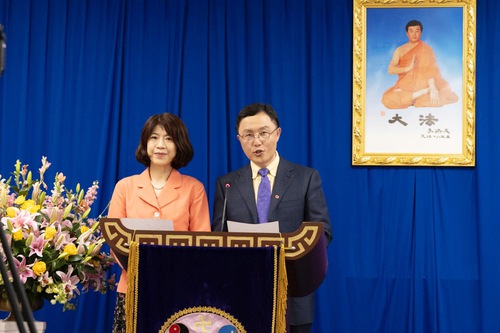 Sound of Hope Radio Network held an experience sharing conference on May 21, 2022. 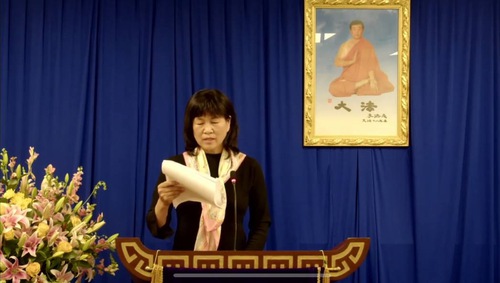 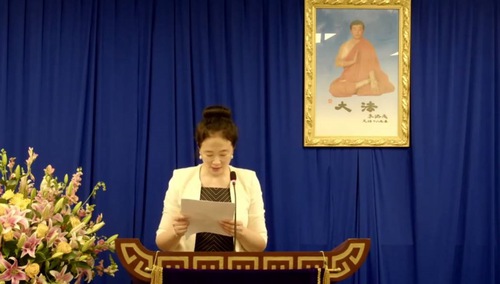 Ukrainian Practitioner: Persevering Despite the War and Sickness Karma

Ukrainian practitioner Eugene has been participating in Sound of Hope since May 2020. He talked about his cultivation experiences while overcoming illness karma and the Russian-Ukrainian war this past year.

He shared how one day he was unable to breathe and almost went into shock. When fellow practitioners helped him by sending righteous thoughts, he got better. He kept reciting the Fa when he was awake.

He gradually enlightened that this “illness” was not real. There was nothing wrong with him. In fact, the more afraid he was, the worse the illness appeared, but the less he thought about it, the better he felt. When he strengthened his righteous thoughts, all the symptoms of sickness karma disappeared.

Russia began attacking Ukraine on February 24, 2022. Kyiv, the capital city where he lived, was bombed. The bombing could be heard every day for one month. Sound of Hope asked Eugene to be a temporary war correspondent. Although he was a little scared, he still went out and took photographs and videos to convey the reality of the war.

As the war continued, he considered leaving the city because of his worries and fears; but his sense of responsibility and mission made him decide to stay and not leave Kyiv for the safer region of Western Ukraine, in order not to delay Sound of Hope’s coverage of the war. In sharing his enlightenment on this issue, he said, “I understand that I can’t focus on how the war progresses. I have to look at this issue from the perspective of a cultivator.”

Radio Broadcaster: A Cherishing and Devout Attitude Towards Dafa

Ms. Wen from Japan, who is engaged in broadcasting, said that she has practiced Falun Dafa for 24 years, and has been validating the Fa through the media for more than ten years. Throughout the years, she has experienced both trials and hardships.

Ms. Wen said that after the pandemic began, she felt the urgency of time passing and was motivated to keep improving. She reminded herself that when she reads the Fa she must absorb the meaning of every sentence. Gradually, she enlightened that the order in which Master taught the Fa was carefully arranged and had broad connotations.

During Fa study, she also had feelings that she usually only experienced while doing the exercises: for example, she felt like she was surrounded by a strong energy field, and as though she was sitting on a lotus plate that was rotating. When she studied the Fa again, she felt that every sentence was the truth and every sentence was a heavenly secret. After understanding the preciousness of the Fa, she realized that many practitioners knew the importance of studying the Fa but only superficially. If all practitioners truly understood the preciousness of the Fa, they would greatly cherish it, diligently read the Fa, and proactively improve in cultivation.

After studying the Fa wholeheartedly, Ms. Wen looks inward when she encounters problems at work or at home that move her. She said that looking inward forms a mechanism. Thus, her speed of passing personal tests has become faster. With her continuous cultivation, the so-called troubles around her were resolved one by one.

Video Project Coordinator: The Coordinator Should Be the Leader of Fa Study and Cultivation

Ms. Li is the coordinator of the video news team in the New York branch of Sound of Hope, and talked about her recent experiences. In the beginning she participated with an attitude of being temporary help. Later, while cooperating with fellow practitioners she was able to understand the importance of doing well in this project. She also became aware of the importance of working as one body.

Ms. Li said, “We must constantly overcome the gaps between fellow practitioners and between projects. If we can do this, it fundamentally denies the interference from the old forces, so that we will have more power to do the project well.”

Ms. Li said that thanks to the efforts of other practitioners, the Chinese video team continued to grow. Practitioners encouraged each other in their practice and persisted in group Fa study once a week, which benefited her team a lot. Since becoming a TV coordinator, she now understands the importance of the responsibility she has on her shoulders.

“For an ordinary practitioner, it’s a personal matter whether to succeed or not in cultivation,” Ms. Li said, “But as a coordinator, it’s different. Whether this team can act properly, and whether it can meet Master’s requirements in cultivation, the coordinator will play a vital role.” [Referring to Master Li Hongzhi, the founder of Falun Dafa.]

Ms. Li said that only by studying the Fa well, in various affairs, especially in emergencies, can one quickly see through the essence of the situation and move in the right direction.

Participants Benefit from Attending the Conference

Mr. Li Zheng, who used to be a professor of a university’s Department of Architecture and is now the host of the Sound of Hope video team, said that in the process of cultivation, he is constantly correcting his view of things. From other practitioners’ sharing during the conference, he noted that they improved by getting rid of the bad things in themselves, reducing the mentality of showing off, and returning to their true nature.

Mr. He from the United Kingdom said that all the practitioners in the media project were very busy with their work, but it was very encouraging to hear that they were able to keep cultivating themselves even while they are so busy.

As the conference wrapped up, the attendees thanked Master for the opportunity to learn and cultivate together. They said that they would not forget their vows and missions, and at this precious time, they would use the media to save more people.