(Minghui.org) Practitioners gathered at Pullen Park in downtown Raleigh on May 14, 2022, to celebrate the 30th anniversary of Falun Dafa’s introduction to the public.

May 13, 2022, is the anniversary of Falun Dafa’s introduction and also marked the 23rd World Falun Dafa Day and the 71st birthday of Mr. Li Hongzhi, the founder of Falun Dafa.

Friends and colleagues of Falun Dafa practitioners also participated in the activities that day and some of them learned the exercises. Several passersby also joined the Falun Dafa exercises with the group. A woman who had learned the exercises at a Falun Dafa Day event two years ago came to Pullen Park again. She expressed her gratitude to the Falun Gong practitioners and said that she was desperate because society is getting worse, and she only sees hope in Falun Dafa.

Several Falun Dafa practitioners shared how they started to practice and expressed their infinite gratitude to Master Li Hongzhi. 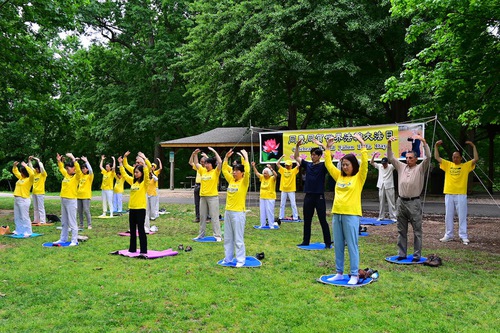 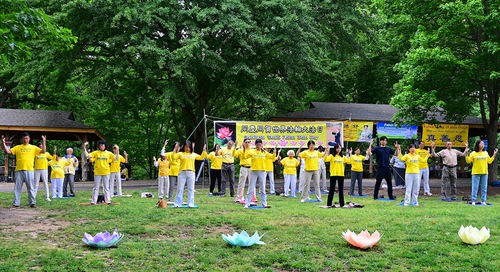 Practitioners gather at Pullen Park in downtown Raleigh on May 14, 2022, to celebrate World Falun Dafa Day 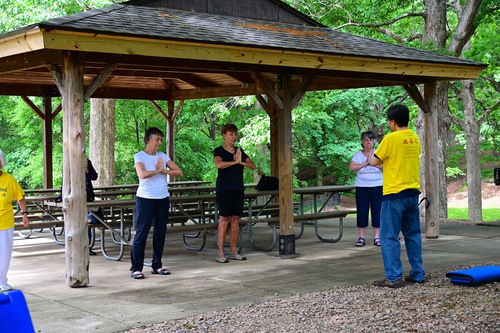 Understanding the True Meaning of Life

Environmental biologist and Vietnamese Falun Dafa practitioner Thai Thon moved to the United States with his family in his childhood. During his younger years, he tried to understand the true meaning of life, improve himself, and he tried to understand why there is so much pain and conflict in the world. He tried various spiritual things, such as meditation, yoga, qigong, and martial arts, and read many books on different practices. But none of them brought him any positive influence or change, nor did they answer his basic questions.

“In my twenties, I was disappointed and frustrated with life and became very withdrawn. I believe that life has a higher meaning, but I was very frustrated because I couldn’t find the answer,” Thai recalled.

After Thai started practicing Falun Dafa, he changed with each passing day. “Before (practicing Falun Dafa), I was withdrawn and introverted and had a negative view of people and life. After the practice, I suddenly opened up and became more outgoing and positive,” he said.

He understood that the principles of Truthfulness-Compassion-Forbearance should reflect in everything a cultivator does. He practiced the exercises during his lunch breaks and introduced Falun Dafa to his colleagues. He became more kind and considerate to the people around him. His parents and younger sister saw the changes in him and embraced Falun Dafa too.

Twenty-four years into his cultivation practice, Thai no longer has anxiety from not knowing the meaning of life and why the world is the way it is.

“I am now increasingly selfless, compassionate, and forgiving. I have less stress and anxiety in my life. Even after all these years, I find myself always improving mentally, physically, and spiritually, and constantly discovering new and wonderful things in Falun Dafa,” he said.

Thai wants to tell people who are considering practicing Falun Dafa to give it a try. “Let it all happen naturally, and you’ll gain a lot,” he said.

Kelly became interested in qigong in her teens and learned about Confucianism and Lao Tzu. Later she heard about Falun Dafa from a classmate in middle school. She started cultivation practice after learning the Falun Dafa exercises at an exercise instruction class at a public library in Greenville and buying a copy of Zhuan Falun.

Kelly had always wanted to be an upright and virtuous person but didn’t know how to. She said that Falun Dafa taught her how to behave with integrity, be of noble character and how to hold herself to higher standards.

“Falun Dafa not only brought me physical health but also made my heart at peace. I realized the true joy of putting Truthfulness-Compassion-Forbearance into practice. I really feel that Dafa has improved my physical health and my character.”

New Student: Thank You Master for Your Guidance and Help

New student Jennifer Qi told the story of how she began to practice Falun Dafa. She had a backbone issue three years ago that had forced her to lay in bed most of the time. She required help with the most basic things of everyday life. After surgery and some acupuncture therapy, she was able to walk and stand for less than half an hour. The problem relapsed several times, and she became wheelchair-bound each time.

Her teacher in mainland China told her that practicing Falun Dafa might help. She browsed the Falundafa.org website, and downloaded and read some books. After gaining some knowledge of the practice, she learned the exercises from local practitioners.

After practicing Falun Dafa for one month, she no longer needed a wheelchair and went back to work in a restaurant. After three months, she was able to run and jump and was able to carry her child again. “I couldn’t believe it myself!” Jennifer said, “I can now carry 50 or 60-pounds of things, which was unimaginable before!”

Jennifer’s physical changes started when she practiced the exercises. After reading through Zhuan Falun for the first time, she felt relieved and understood the meaning of spiritual practice more deeply.

“With the improvement of my xinxing, my body changed even faster. I realized that the people and things I came into contact with were inevitable arrangements, and I gradually stopped worrying about them. Now when I practice the exercises, I often feel that my main soul is moved to tears,” she said.

“I hope my story can help others,” Jennifer said.