(Minghui.org) Today's news from China includes incidents of persecution that took place in 7 cities or counties in 5 provinces, where at least 12 practitioners were recently persecuted for their belief. 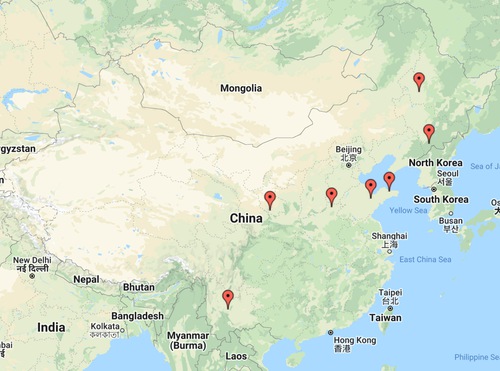 Local domestic security officers arrested Ms. Liu Yijun and ransacked her home on November 4, 2020, on the grounds that she was caught on surveillance cameras while posting Falun Gong materials. She was taking care of her elderly, paralyzed mother at the time. Ms. Liu was released on bail around 11 p.m. that night.

In the beginning of April 2022, Ms. Liu was notified that her case was reopened, and a trial was scheduled in the Chuxiong City Court on May 6.

Mr. Wang Chaojie, a teacher at the Tangyin County No. 1 Middle School, was reported to the police for talking to people about Falun Gong. He was arrested on March 14, 2022. The police ransacked his home and confiscated a cell phone, Falun Gong books, over 20 handwritten copies of Falun Gong books, five music players, and over a dozen USB drives. Mr. Wang was taken to a brainwashing center and he could not go to school to teach his classes.

Mr. Wang was released on bail on April 1 and was picked up by his family, the school’s vice principal and director of the grade he teaches. As of May 3, the school has not allowed him to go back to work.

Sun Zhixiang, a team leader of the Jiangbei Police Department, and other officers broke into Mr. Zhang Min’s home, ransacked the place, and arrested him at around 9 a.m. on February 8, 2022. They confiscated a Falun Gong book and two music players. Mr. Zhang was detained for 13 days.

Two officers from the police department broke into Ms. Sun Liping’s home, ransacked the place and confiscated a Falun Gong book and a cell phone on February 11. Ms. Sun was detained for 13 days.

Sun Zhixiang and other officers broke into Ms. Li Yahui’s home and ransacked the place on February 16. Ms. Li was detained for 13 days.

All three practitioners have returned home.

Mr. Meng Fan went to Daqing Railway Station to take a train at 8 p.m. on April 28, 2022. He was arrested at the security checkpoint while the guards checked his national ID card. The guards found Falun Gong e-books and MP3s that he carried. Mr. Meng was later transferred from the Railway Police Station to the Dong’an Police Department.

The next day, four officers from the police department and the police station ransacked his home and confiscated all of his electronic devices, including a computer, a printer, and a notebook computer which contained Falun Gong content. On the evening of the April 29, Mr. Meng was released on bail for one year.

Ms. Chen Yawen and Ms. Zhao Lihong from the Yantai Development Zone were reported to the police on April 17, 2022. They were arrested by officers from the Fulai Police Station. Both practitioners were released that day.

About two days later, the officers ransacked both practitioners’ homes. They confiscated over 20 Falun Gong keepsakes and lotus pendants from Ms. Chen’s home. Ms. Chen was given 14 days of administrative detention, to be served at home under residential surveillance.

They confiscated several keepsakes from Ms. Zhao’s home. The police station fined her 1,000 yuan and released her on bail for one year on the grounds that she was known to tell people about Falun Gong.

Four officers from the Dong’an Police Department ransacked Ms. Guo Shuying’s home around 7 a.m. on April 20, 2022. They confiscated a laptop, a set of Falun Gong books, two music players, photos of the founder of Falun Gong, and printed materials.

The officers ransacked Ms. Zhang Fengxia’s home on the morning of April 20 and confiscated photos of the founder of Falun Gong, a set of Falun Gong books, three music players, two tablet computers, one DVD player, and 30 yuan in paper bills with Falun Gong facts printed on them.

7. [Weifang City, Shandong Province] The Case Against Ms. Wang Xian Turned Over to the Procuratorate

Officers from the High-tech Zone Domestic Security Division went to Ms. Wang Xian’s home in Weicheng District on the morning of March 9, 2022. They took her to the procuratorate, where she learned that her case had been turned over to it.

Ms. Wang was placed under residential surveillance at her home in Weifang City. On April 15, the procuratorate called Ms. Wang and told her to go to the procuratorate on the morning of April 18, but she did not go. On April 20, they called again, but Ms. Wang did not answer the phone.

Ms. Wu Caihui was reported to the police by a security guard while talking to a student about Falun Gong in a residential community in early March 2022.

Liang Tao, head of the Domestic Security Division in the Pingliang City Police Department, and four others broke into Ms. Wu Caihui’s home on March 9 and ransacked the place. They confiscated Falun Gong books, printed materials, two cell phones, and 300 yuan in paper bills with Falun Gong facts printed on them.

Ms. Wu was then taken to an underground interrogation room at the Kongtong District Police Department. She was restrained in an iron stool. The officers spent four hours pressuring her to tell them where she got the printed materials and who her contact person was. Throughout the interrogation, Ms. Wu kept clarifying the truth to the officers, and she was able to return home later.

Two days later, the officers told her husband, daughter, and son-in-law to continue to press her for answers, but she did not give in. On the fifth day, Ms. Wu and her husband were called to the police department, where she was told to either pay a fine of 20,000 yuan or go to jail. She and her family are now being pressured by the police.