(Minghui.org) May 13, 2022 is the 30th anniversary of Falun Dafa’s public introduction, the 23rd World Falun Dafa Day and also the 71st birthday of Falun Dafa’s founder, Mr. Li Hongzhi. On the morning of May 15, 2022, practitioners in Malaysia held events to commemorate this joyous day. Some gathered at the capital city Kuala Lumpur, while another event was held in Penang. During the events practitioners expressed their sincere well wishes and gratitude to Master Li, thanking him for bringing the goodness of Falun Dafa to the world.

At 7 a.m. practitioners started off by doing the Falun Dafa exercises at Titiwangsa Lake Garden, a famous leisure park in Kuala Lumpur. After practicing the exercises they took a group photo to thank Master and wish him a happy birthday.

Afterwards they did the dragon dance and gave waist drum performances. Practitioners dressed as fairies distributed truth-clarifying materials and small lotus flower keepsakes. Some practitioners also talked to residents and sought their signatures on a petition calling for an end to the persecution of Falun Dafa in China. 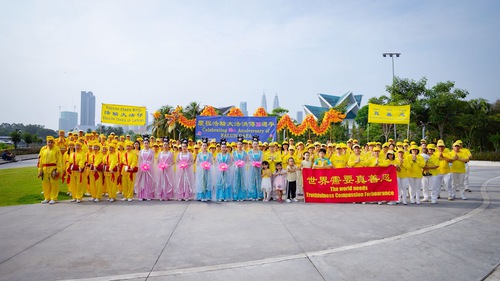 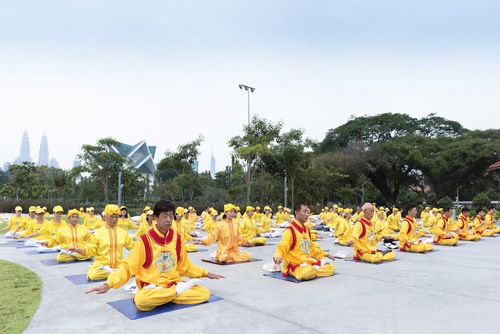 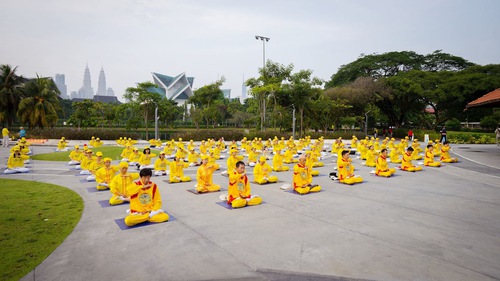 Practitioners did the exercises at Titiwangsa Lake Garden, a famous leisure park in Kuala Lumpur. Many people were attracted by the peaceful scene. 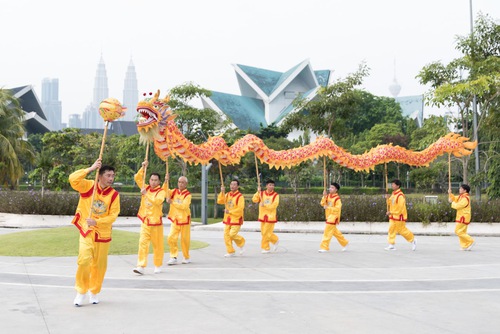 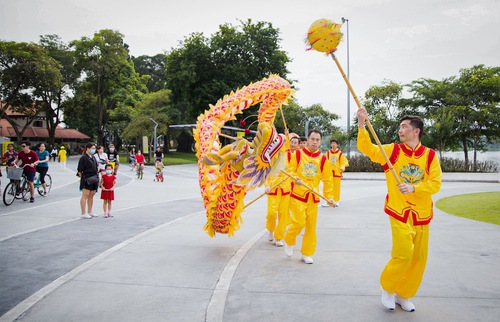 As part of the day’s events to celebrate the 30th anniversary of Falun Dafa’s introduction practitioners did the dragon dance. 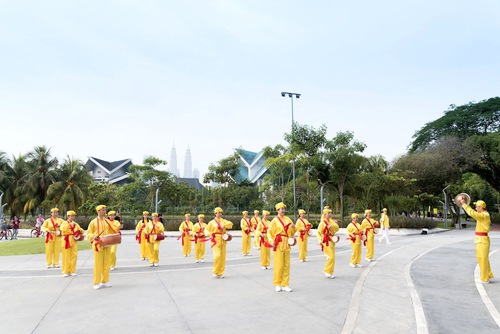 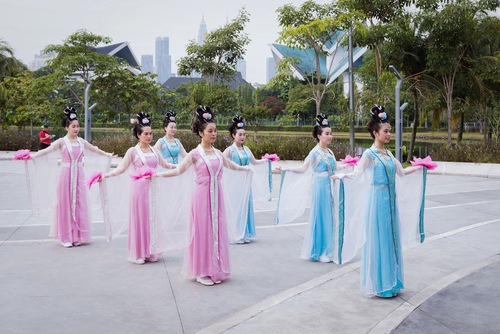 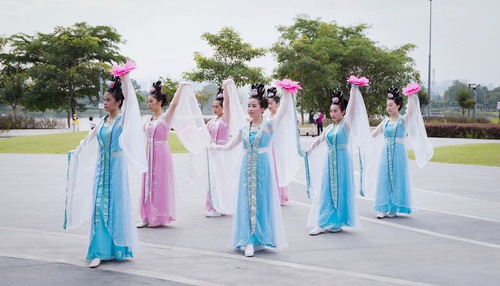 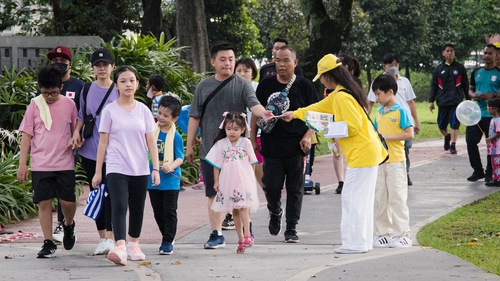 Practitioners also told people about the persecution and sought their signatures on a petition to end it. 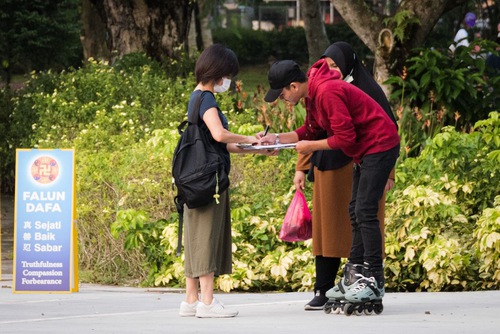 People sign the petition to show their support for practitioners’ effort against the persecution of Falun Dafa.

Practitioners also reflected on the positive changes in their minds and bodies after they began practicing Falun Dafa.

Guo Shufang, who is 69 years old this year, was a famous singer in the 70s and sold many records. Before she began practicing Falun Dafa in 2003, Ms. Guo’s body was in very bad shape. Her unhappy marriage also caused her to be depressed.

After she started practicing Falun Dafa Ms. Guo said she found the true meaning of life. By practicing the exercises and reading Zhuan Falun she tries her best to handle everything based on the Fa principles of Truthfulness, Compassion, and Forbearance. She learned how to cultivate her xinxing. 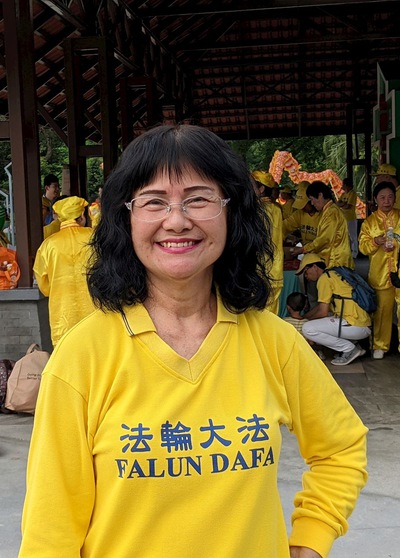 Guo Shufang, who is 69 years old, was a famous recording artist in the 70s. She says that Falun Dafa showed her the true meaning of life.

Ms. Guo is also energetic and cheerful and says that she is much happier now. When her family members saw her, they all said that she looked young and carefree. Whenever people remark on her youthful appearance Ms. Guo tells them that practicing Falun Dafa brought these positive changes and she encourages them to practice Falun Dafa too.

Ms. Guo hopes that people can listen to practitioners when they clarify the truth and not to miss this rare opportunity.

Couple Happy to Learn About Dafa's Physical and Mental Benefits

Su Xinyi from Taiwan used to design jewelry. She and her husband (from the former Czechoslovakia) live in Kuala Lumpur. In 2019, she first heard about Falun Dafa at the practice site in Petaling Jaya, Selangor. After attending the nine-day Falun Dafa class when she returned to Taiwan, Ms. Su felt that this practice is very good. She urged her husband to attend the classes and he soon began practicing. 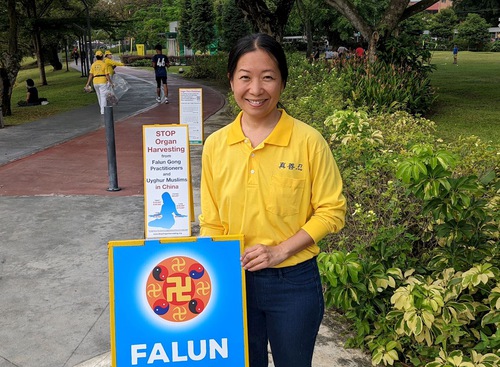 Su Xinyi from Taiwan and her husband from the former Czechoslovakia benefited physically and mentally after they began practicing Falun Dafa. During the 30th anniversary activities, Ms. Su expressed her deep gratitude to Master and hopes that everyone can read Zhuan Falun.

Ms. Su participated in the celebration. She said that since childhood she suffered from insomnia and often had nightmares. There were also many problems with her health, such as lower back pain and vomiting due to her food allergies, etc. All these made her miserable. However, after she practiced Falun Dafa for just one to two months, all this went away. Not only did she seldom lose sleep, she no longer had nightmares and she sleeps soundly now.

When she first started practicing Falun Dafa, Ms. Su did not know that this practice was so wonderful. Her legs were bent before cultivation but after meditating for a month, she realized that her legs became normal.

As for her husband, when he first started practicing he read the main book of Falun Dafa, Zhuan Falun a few times. After smoking and drinking for many years he easily stopped these bad habits. His family and friends were all surprised.

On this 30th anniversary of the introduction of Falun Dafa to the world, Ms. Su is very grateful to Master for his benevolent salvation. She hopes that the whole world can come and take a look at Zhuan Falun.

Letting Go of Hatred and Grudges

Falun Dafa practitioners in Penang, which is located in northern Malaysia, also held group exercises on May 15 to celebrate the special day and tell people about Falun Dafa. 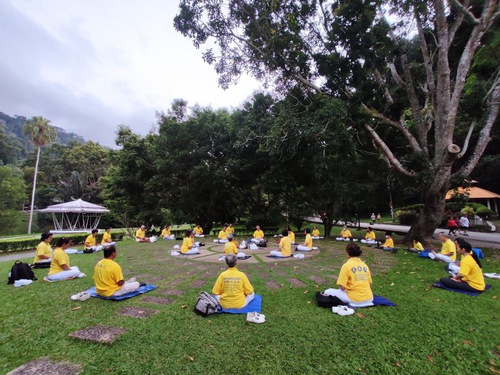 Practitioners in Penang did the exercises on May 15 and told people about Falun Dafa.

Zhu Liwei from Butterworth, Penang, started cultivating in Falun Dafa in September 2018. Ms. Zhu, who is 46 this year, is the executive manager of a waste contractor company. Ms. Zhu began practicing Falun Dafa three years ago and talked about her cultivation experiences.

Ms. Zhu said that after she began practicing Falun Dafa, she was able to let go of material gain and stopped obsessing over money and property. When she sees that others have more money she no longer gets jealous. She also gave up all her bad habits and says her morals have improved. 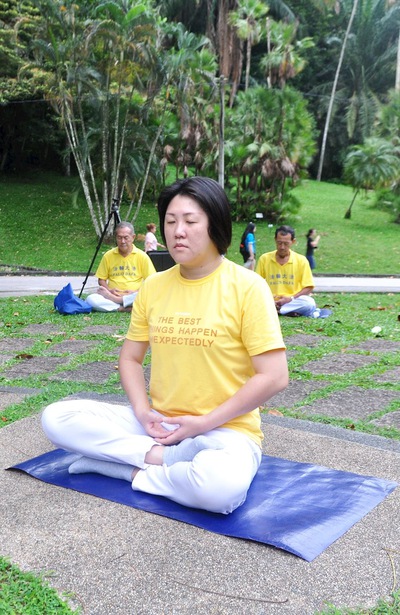 Zhu Liwei who lives in Butterworth, Penang, is happy to find Falun Dafa. She said Dafa helped her eliminate her attachments, grudges and hatred and she thanked Master for his salvation.

At her workplace, Ms. Zhu let go of her attachment to fighting with others. She no longer compares herself with her co-workers and now she places others first. She also no longer complains that she does more work than the others. When conflicts arise at work, she examines herself instead of blaming others. She strives to become a selfless person who puts others before herself.

Ms. Zhu also constantly reminds herself that she is a cultivator so she must maintain a compassionate heart at all times, treating everyone and every matter calmly. She must also reflect on herself based on the Fa constantly, including letting go of the resentment that she had towards her ex-husband, attachments, grudges and hatred. She understands that everything happens for a reason. Ms. Zhu was able to forgive her ex-husband for having an affair, his terrible behavior and his debt of a few million dollars which he owed and is still repaying. She no longer pursues the fact that her ex-husband has never given her any alimony for their child. Ms. Zhu even introduced the Fa to her ex-husband, hoping that he can begin practicing.

On the 30th anniversary of Falun Dafa’s introduction, Ms. Zhu was full of emotion and said, “I am very glad that I can obtain the Fa. Thank you Master for saving me. I will do the three things well, cultivate myself and assist Master in saving sentient beings. I believe in Master and the Fa and will follow Master home!”

Carol Chin, from Kota Kinabalu, Sabah, Malaysia, is a construction contractor. For more than 20 years, Ms. Chin’s daily life was very busy and unhealthy causing her health to deteriorate. She often suffered from body aches, depression, and migraines, especially when she worked outdoors or under the hot sun. The doctor said that her liver was covered in fat and it was very hard for her heart to pump enough blood. 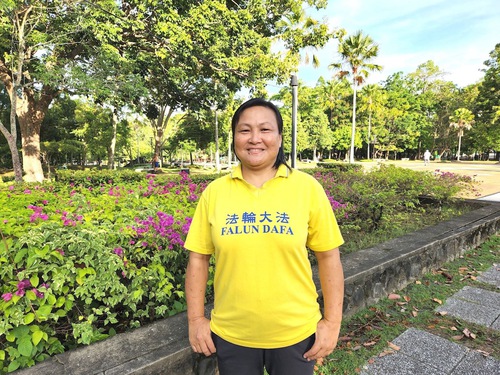 Six years ago Ms. Chin met her sister’s colleague, who told her about Falun Dafa. Ms. Chin felt that since it is free of charge, why not give it a try.

At first, every time she practiced the exercises her shirt was soaked with sweat. As a new practitioner, Ms. Chin felt that it is very difficult to practice the exercises. She also started reading Zhuan Falun. As time passed, she had a deeper understanding of the Fa principles of Falun Dafa. Miraculously, she lost a lot of weight and her health problems gradually lessened.

After practicing Falun Dafa for six years Ms. Chin has now grown to be a better person with better health. She is very grateful to Master Li Hongzhi and Falun Dafa for giving her a second chance to live and the happy life she is leading now.

“My Sales Boomed Every Time My Client Started a New Career”

“Getting Through Difficult Situations With Righteous Thoughts and Actions”