(Minghui.org) Today's news from China includes incidents of persecution that took place in 12 cities or counties in 9 provinces, where at least 25 practitioners were recently persecuted for their belief. 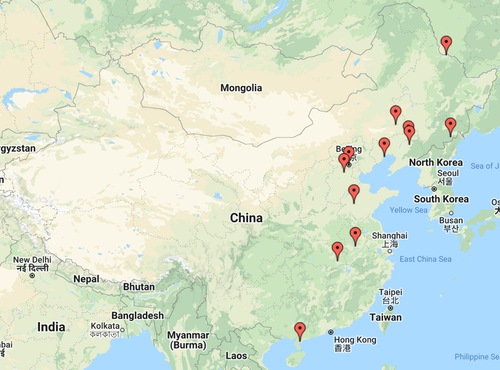 Ms. Wang Lei was sentenced to four years in prison. She has appealed the sentence. In recent days, her lawyer received a call from the Intermediate Court saying that the original verdict was upheld.

Ms. Ye, 86, is retired from the Anhui Provincial Department of Water Resources. Last year, she gave an amulet to someone, who in turn reported her to the police. The police filed a case at the time. The case has now been turned over to the procuratorate. The procuratorate staff stated that they wanted the court to sentence Ms. Ye to six months in prison.

Ms. Cao Chunmei and her sister Ms. Cao Meiying were arrested on August 20, 2021. The Huahu Police Station filed cases against them, and they are now facing prosecution. Last year, the two sisters were held in a brainwashing center and a detention center for a total of 41 days. They refused to go along with the persecution by refusing to sign anything. They returned home on October 1.

Around 9 a.m. on April 1, 2022, officer Gao Weibing from the Huahu Police Station broke into the two sisters’ homes successively and took them to the police station. The officer said that the sisters did not sign the documents last year, but they had to sign them now.

Ms. Fu Limei was indicted by the Xunke County Procuratorate on February 21, 2022.

Mr. Wu Haibo was arrested by officers from the Xiashan District Police Department and the Xincun Police Station on March 5, 2022. He was first held in solitary confinement for about 20 days before being transferred to the Suixi County Detention Center.

Ms. Zhao Yanping from Diaobingshan City, Liaoning Province, was arrested at her daughter’s home in Hangzhou City, Zhejiang Province, in November 2021. She was tried on March 17, 2022. She is being held in the Yuhang District No. 1 Detention Center.

The officers took Mr. Chen home at 2 a.m. on April 8. They confiscated Falun Gong books and photos of the founder of Falun Gong. Subsequently, they went to Mr. Zhang’s home and ransacked the place. Mr. Zhang’s wife Ms. Dong Ping was at home, and she was also arrested. The officers confiscated a printer among other personal belongings.

Guan was taken home at 3 a.m. The officers learned from Guan that Guan’s daughter-in-law had heart problems. They did not enter Guan’s home. Instead they asked for two booklets and a photo of the founder of Falun Gong.

Mr. Chen and Guan were released. Liu, Cui, Zhang, and Dong are being held in the Huludao Detention Center.

Mr. Xu Qinghuan, his daughter Ms. Xu Wenting, and Ms. Shen Ying from Sanjie Village in Gucheng Town were arrested around April 1, 2022, by officers from the Dingxing County Domestic Security Division and the Gucheng Town Police Station. The three practitioners are being held in the Xiao Village Brainwashing Center.

The three practitioners were previously arrested on April 1, 2020, by officers from the Dingxing County Domestic Security Division and the Gucheng Town Police Station.

Ms. Zheng Hongling, 58, is retired from the Liangzhuang Mine Hospital which is affiliated with the Xinwen Mining Group. She lives in the Xinyuan Residential Community, Tianping Sub-district, Daiyue District. Ms. Shang Yuzhen, 63, is a retired employee. Ms. Zhang Liping, 67, is a retired employee of the Tai’an Winery.

Ms. Zheng and Ms. Shang were stopped by a police officer while distributing Falun Gong materials in a residential community around 7 p.m. on April 5, 2022. The officer shoved the two practitioners and their bicycles to the ground and handcuffed them. He then called for a police car and took them to the Tianping Police Station. Later, a group of officers took Ms. Zheng to her home, ransacked the place, and confiscated Falun Gong books and printed materials. Ms. Zheng stayed at home that night as she had to take care of her daughter.

When the officers raided Ms. Zheng’s home, they got the key to Ms. Shang’s rental home and went straight there. Ms. Zhang Liping, who lived with Ms. Shang, locked the door from inside, and the officers kept knocking on the door. After quite some time, everything became quiet. Ms. Zhang opened the door and headed out. She was arrested by officers who had been quietly waiting outside the door. Two officers and a property management staff member broke into her home, and confiscated Falun Gong books and other items. Ms. Zhang was taken to the Tianping Police Station.

Ms. Zhang and Ms. Shang left the police station around 5 p.m. on April 6.

Ms. Sun Qingju and her two-year-old grandson were arrested by officers from the Bajiazi Town Police Station. Her home was ransacked. Their whereabouts are unknown.

Ms. Jiang Zigui is from Xinbin County. Zhang Lijun, head of the Xinbin County Domestic Security Division, and other officers broke into Ms. Jiang’s home around 8 p.m. on April 7, 2022. They ransacked the place and confiscated her personal belongings.

Mr. Chen Yufei, his wife Ms. Zhao Dexian, Wang Yanfei, Yin Shuling, and Zhou Guangyun from Toudaowan Village, Heilongba Town, Kailu County, were arrested on April 7, 2022, by officers led by Liu Lixi, head of the Kailiu County Political Security Division. It was likely that someone reported them to the police. The officers ransacked their homes. The officers questioned Ms. Zhao about the internet censorship circumvention software. That afternoon, the five practitioners were released on bail and returned home under the guarantee of officials in charge of the village. The police did not return the cell phones to any of the five practitioners.

“Ningxia Man in Serious Condition While Detained for His Faith”

Latest Podcast
Podcast (Cultivation): “Cherishing Our Predestined Relationships with Other Practitioners”
- May 02, 2022