(Minghui.org) Four cities in Ontario, Canada, held flag-raising ceremonies on May 9, 2022, to celebrate the 30th anniversary of Falun Dafa’s introduction to the public. The mayors of each of the four cities and nine city councilors praised the principles of Truthfulness-Compassion-Forbearance. They also promised to continue supporting Falun Dafa so that more residents would benefit from it, both physically and mentally. 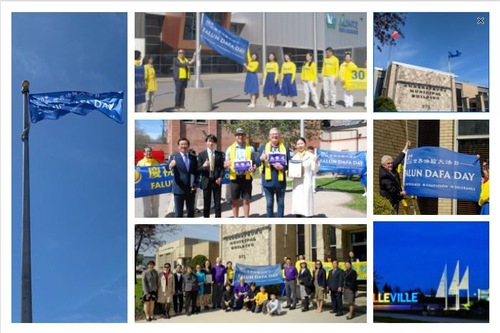 This was the second time that Orillia, which is known as Sunshine City, raised a flag for World Falun Dafa Day. Orillia Mayor Steve Clarke said Truthfulness-Compassion-Forbearance make our world a better place. 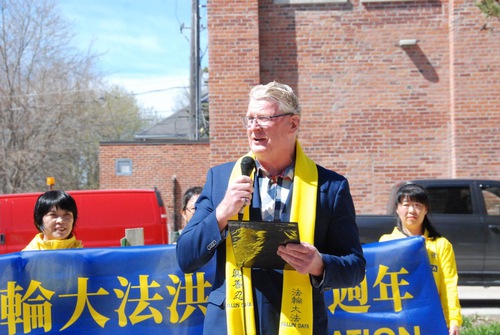 Steve Clarke, mayor of Orillia, announced May 13, 2022, would be the city’s Falun Dafa Day and read a proclamation he issued 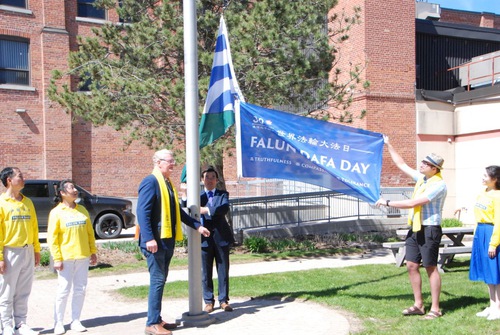 Mayor Clarke said the practice of Falun Dafa could improve physical health and help people get through the pandemic. It could bring positive changes that apply to everyone.

Practitioners have demonstrated great compassion and forbearance while facing the 23-year-long persecution by the Chinese Communist Party (CCP), he said. Falun Dafa Day is an important occasion especially this year since it marks the 30th anniversary of the practice’s introduction to the public. That is why every opportunity to promote the values of Truthfulness-Compassion-Forbearance is important.

At the end of the event, Mayor Clarke shook hands with each practitioner and expressed his sympathy about the ongoing suppression in China. He said it is outrageous that such a peaceful meditation that promotes kindnesss is persecuted in China. The persecution should have never happened. 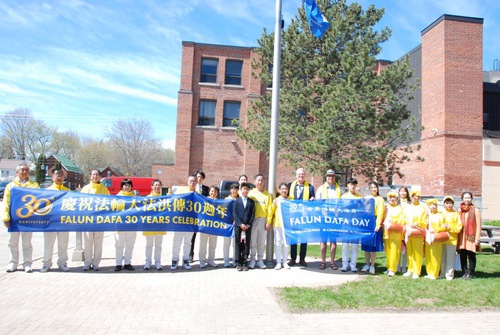 Mason Ainsworth, 30, has been a city councilor for eight years. He was also the youngest city councilor when he was elected to the position at the age of 22. As a long-time supporter of Falun Dafa, he wished practitioners well and encouraged them to continue their efforts. 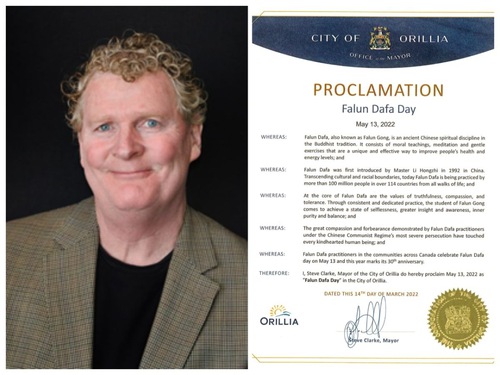 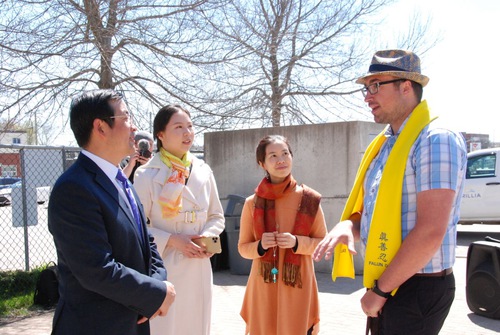 Councilor Ainsworth said it is an honor to come to the flag-raising ceremony, and it is meaningful because it brings the community together to support the values of Truthfulness-Compassion-Forbearance. He hoped the persecution in China would end soon and he wanted to help practitioners to achieve that.

The Suppression Will Come to an End 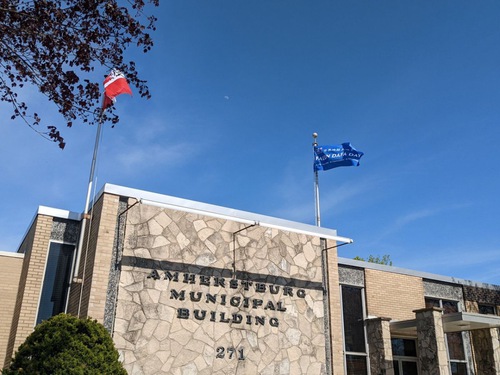 Flag-raising at the Amherstburg Municipal Building 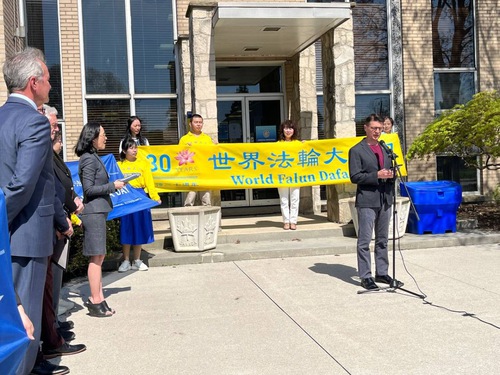 Mayor DiCarlo said this activity was very important because of the values practitioners promote. This was not only an acknowledgment of Truthfulness-Compassion-Forbearance, but also led a path toward freedom that will benefit everyone.

The principles of Truthfulness-Compassion-Forbearance go beyond the boundary of ethnic groups and cultures, he said. In fact, the community agrees with and cherishes these values. This is a message of kindness and compassion. Especially during this global pandemic, these values are even more precious since they would bring about a better world.

As a government official, it takes courage to speak up for Falun Gong, he explained. But this is incomparable to the bravery of practitioners in China who safeguard their faith and who need to remain courageous at all times. 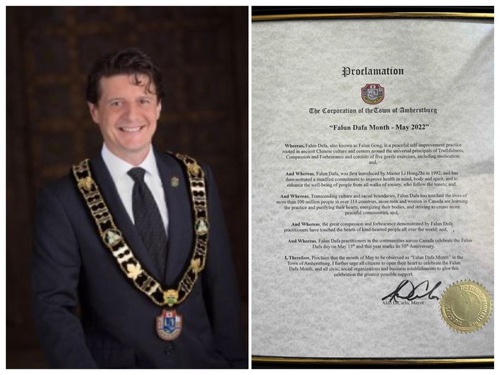 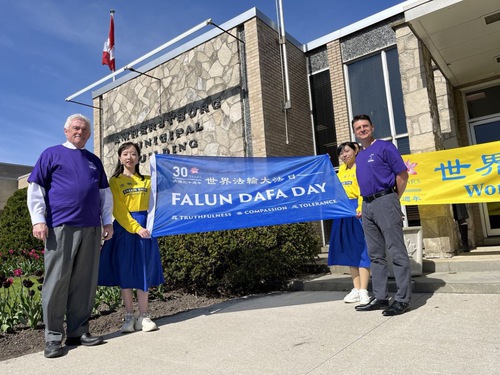 After the CCP began to suppress Falun Gong 1999, Amherstburg Town Councilor Michael Prue condemned the atrocities. He said the day would come for the persecution to end and he hoped this would not take long. In fact, he has given numerous speeches in the past calling to stop the tragedies in China, especially organ harvesting from living Falun Gong practitioners.

He said it is great for the city government to raise a flag for Falun Gong. It would help local residents get to know Falun Gong better. He also encouraged practitioners to continue their efforts, since those who promote Truthfulness-Compassion-Forbearance would defeat those who are against these principles.

Councilor Prue said that people in Canada and around the world should obey their consciences. Everyone should openly support Falun Gong practitioners’ freedom of belief. This would help the Chinese government know that Falun Gong is a group that deserves our respect, not persecution. 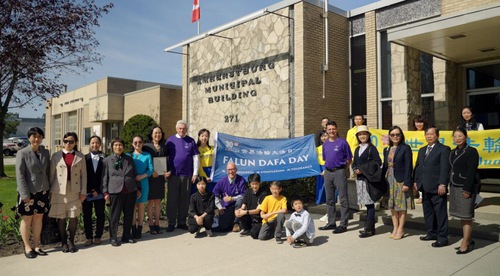 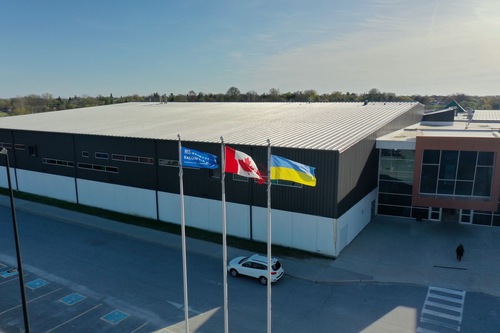 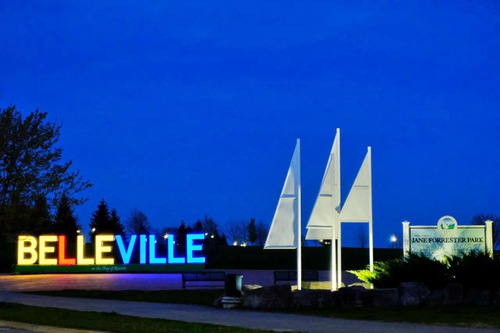 Belleville, which is located between Ottawa and Toronto, also had a flag raising ceremony on May 9. During the evening, colorful lights at the city’s landmark Bridge Street Bridge were also lit up to celebrate the special occasion. 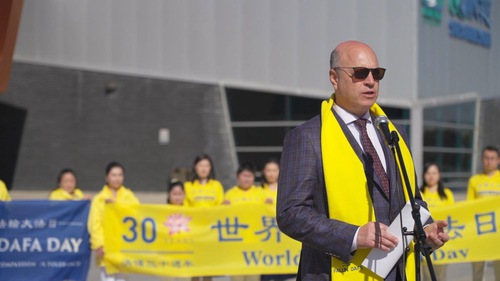 Video of the flag raising in Belleville

Because of Falun Gong’s benefits on mind and body, the practice is well received in more than 100 countries with about 100 million practitioners, explained Mayor Mitch Panciuk. Practitioners’ compassion and courage have inspired people around the world.

Mayor Panciuk said that people living in Canada are fortunate because they enjoy various freedoms. As a mayor, he has the authority and pleasure to support Falun Gong. In particular, practitioners have put in a lot of effort over the past 23 years to expose the persecution in China.

He said the world needs Truthfulness-Compassion-Forbearance and practitioners are working hard to share this message. These principles would help people be more peaceful, sympathetic, and respectful of each other. Over the past 30 years, practitioners have been putting in effort to promote these principles around the world.

In the end, Mayor Panciuk said that freedom does not come easily and sometimes it is vulnerable. That is, it requires that people work diligently to safeguard it. 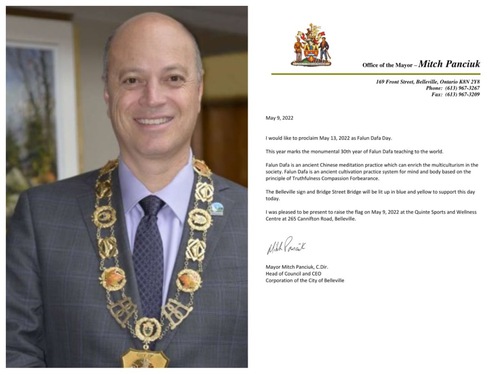 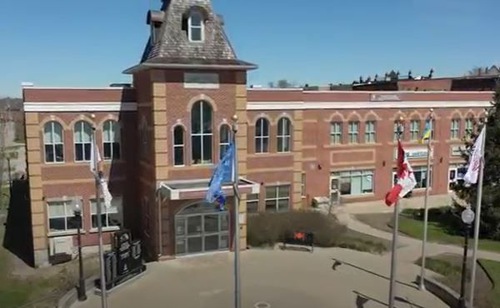 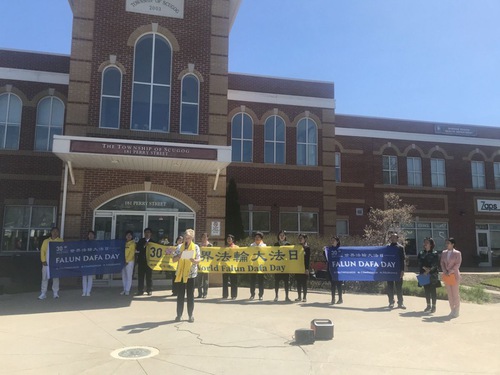 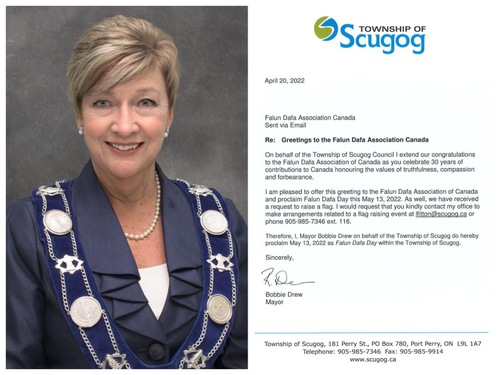