(Minghui.org) On the important and grand occasion of World Falun Dafa Day on May 13, practitioners in Sao Paulo prepared a car float and truth-clarification display boards.

The car float passed through the bustling city center while playing “Falun Dafa Is Good” and an introduction about Falun Dafa and World Falun Dafa Day. They also explained the persecution of Falun Dafa in both Portuguese and Chinese. The recording described Falun Dafa as an ancient spiritual practice that is currently being persecuted in China despite being well-received in over 100 countries. 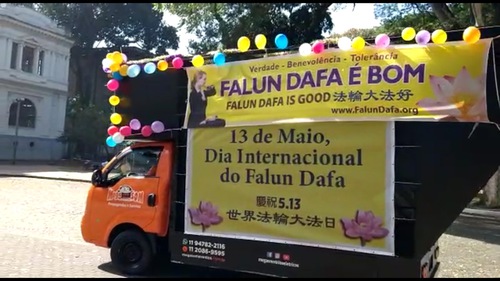 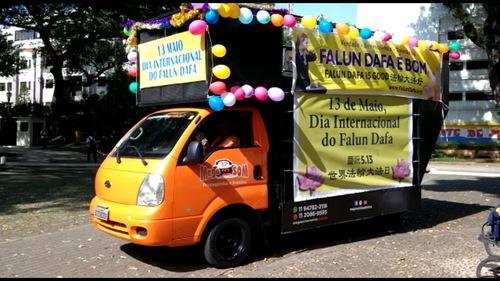 Practitioners’ car float in the center of the city center raises awareness of Falun Dafa.

The bright yellow “May 13th World Falun Dafa Day” and “Falun Dafa Is Good” banners and colorful balloons and ribbons on the car float caught people’s attention. Some stopped to take pictures and were handed truth-clarification materials while others danced to the music, applauded, and put their palms together in the heshi gesture of respect.

Many Chinese people were surprised to see the car float and took pictures. Practitioners distributed copies of the Minghui International magazine and clarified the truth to them. Some of them withdrew from the Chinese Communist Party (CCP) and its youth organizations with practitioners’ help.

Practitioners also gathered at Liberdade, the central, tourist neighborhood in São Paulo. They set up truth-clarification display boards, demonstrated the Falun Dafa exercises, distributed informational materials, and raised awareness of Falun Dafa and the ongoing persecution in China. Those who were given handmade lotus flowers were amazed at how beautiful they were. 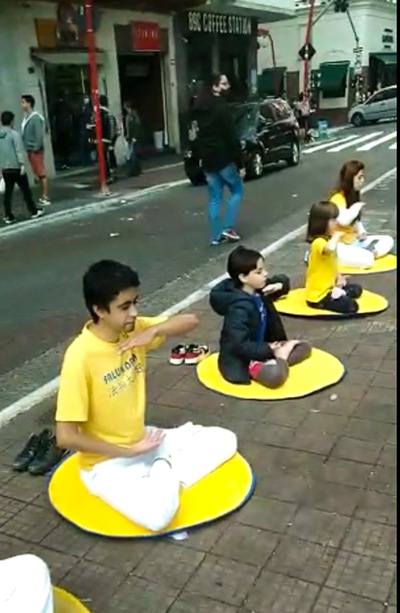 Practitioners demonstrate the meditation and set up truth-clarification display boards at Liberdade in São Paulo.

The car float passed practitioners’ activity at the Liberdade and continued driving around the city so that more people could find out about Falun Dafa.