(Minghui.org) On the eve of World Falun Dafa Day, practitioners from different cities in Russia shared stories about their cultivation to validate the greatness of Falun Dafa with their personal experiences and to express their deepest gratitude to Master Li Hongzhi. 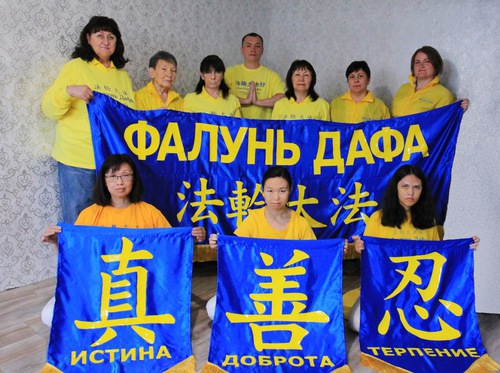 Nina, a Falun Dafa practitioner from Irkutsk, said, “When my two children were five and six years old, I divorced my husband because of family problems. I lost my memory and could not read or write. I even had difficulty speaking. When my coworkers and neighbors greeted me on the street, I couldn’t remember who they were, so I avoided all conversation and became closed off.

“My husband’s departure upset my son, and he became anxious, irritable, and sensitive. My daughter often got sick. She had serious asthma and even a mild cold could put her in the intensive care unit (ICU).”

“My life went on like this until 2006, when I met Falun Dafa practitioners at Lake Baikal. I have now been practicing the Falun Dafa principles of Truthfulness-Compassion-Forbearance for 16 years.

“As soon as I began practicing, my memory came back, and I was able to read. I had the desire to interact with people. I gradually let go of fear, hatred, and resentment, especially resentment for my ex-husband. My cultivation practice also had a positive impact on my children, and they stopped getting sick. My son developed a good relationship with his father.”

“Now I am 67 years old, but I don’t feel my age because I am filled with strength and energy! Thank you, Master!” 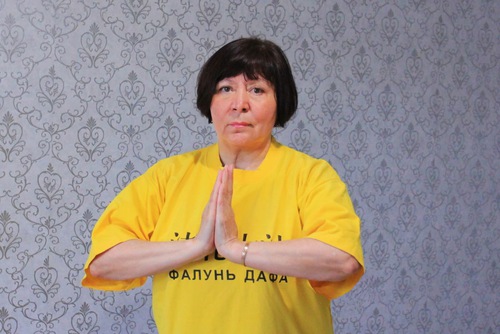 Nina from Irkutsk expresses her gratitude to Master Li.

Searching for and Finding a Spiritual Path

Yuri is from Moscow. He grew up among street kids in the most crime-ridden district of the city in the 1990s. “Famous” gangsters were his role models.

His parents were alcoholics who often drank until they blacked out. Yuri recalls, “After they drank, they wouldn’t let me in the house, and sometimes I had to sleep by the door. I often got sick and failed to graduate from high school before I started working. I saw the deceitful and immoral behavior of grownups, and for a while I could not forgive my mother; I hated her.”

Yuri began drinking at a young age, became an alcoholic at age 15, and a drug addict at 27. His health began to deteriorate and he searched for ways to get over of his addictions. Knowing that drug rehab clinics could not help him, Yuri began to search for a spiritual path.

Six years ago, when Yuri was 32, he was browsing the social media VK when he stumbled upon a message: “Look, this could be your discovery.” Yuri said, “I believed this was what I was looking for. I locked myself up and refused to see anyone. I sobered up for three days before I started listening to Master Li’s lectures. Happiness arrived, and I felt something sublime.”

Gradually, Yuri began to read Zhuan Falun, which teaches the principles of Truthfulness-Compassion-Forbearance. At the time he had difficulty reading, and had to go syllable by syllable. His fellow practitioners helped him overcome the difficulties. Yuri found doing the five exercises very refreshing.

Every now and then he slipped back into his old life. Yuri recalls, “My fellow practitioners suggested that I send forth righteous thoughts, which was very helpful. I knew if I stopped practicing, the evil would drag me back to hell. Thank you, Master, for your compassion and saving me!”

Yuri has been doing his best to tell as many people as possible about the persecution of Falun Dafa practitioners in China and the evil nature of the Chinese Communist Party (CCP.) 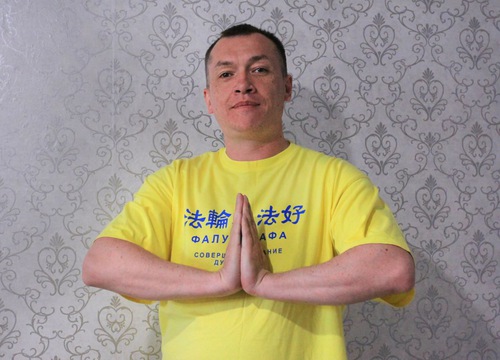 Dina Finally Had Her Questions Answered 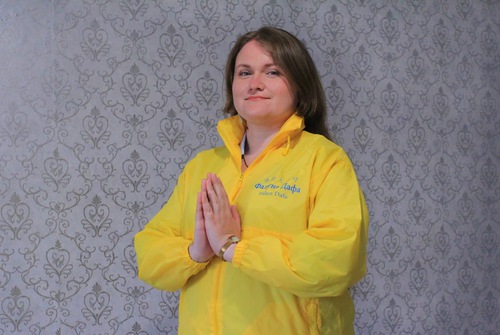 Dina from Krasnoyarsk expresses her gratitude to Master Li.

Dina from Krasnoyarsk vividly remembers looking up into the boundless sky and wondering at an early age, “What lies beyond the sky?” She believed there must be something clean, bright, and noble that oversees the entire universe, in short, something that transcended this realm. She was seized with a certain longing: “Life will eventually end, yet I still don’t know what lies beyond the sky.”

In school, Dina worked hard to understand new things beyond everyday life. She was into culture, drawing, music, dance, crafts, and sports, but none of these gave her what she was looking for.

Ten years ago, Dina saw Falun Dafa practitioners dressed in yellow at an event. She said, “I joined them and did all the exercises. I felt relaxed and I felt a surge of energy pouring into my mind, and my mood improved. The next day, I did the exercises on my own.”

Dina recalls that one day after she had been practicing for a year-and-a-half, her friend’s mother asked, “Did you get a face-lift?” To her friend’s mother’s surprise, Dina’s facial features had changed, and her skin had become softer, clearer, and more delicate.

Practicing Falun Dafa has helped Dina ease her difficulties in interacting with others. She said, “Cultivation practice has opened my heart, and I have become kinder and more open.”

In the past, Dina was not easy to get along with. She said, “I was so stubborn that if a relative or friend didn’t do what I wanted them to do, or if a situation arose that I had no control over, I would get very resentful, and I would explode and retaliate. I don’t know how anyone could tolerate me, because I couldn’t even tolerate myself.”

She said, “Master taught us to think of others first, so I began to understand I shouldn’t act that way, that I needed to compromise, that others might have their own pain that I could not understand, and that I needed to be kinder and listen to others.

“By practicing Falun Dafa, I found what I had been searching for since I was a child. Thank you, benevolent Master!”

Looking for the Real Purpose of Life 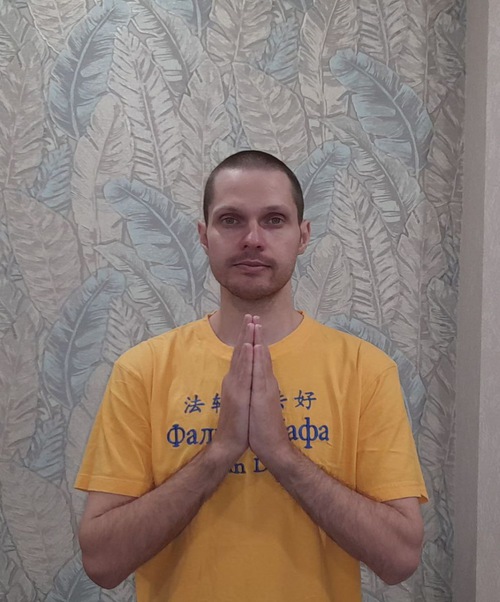 Sasha from Krasnoyarsk expresses his gratitude to Master Li.

“I used to search for an inner freedom that I hadn’t experienced before. For a while, I thought the purpose of living was to enjoy life and not get sick. I wanted to make as much money as I could without working too hard; I wanted everything, but at the same time, I found everything was pointless.

“Five years ago, when I was 29, I came across Falun Dafa and finally had inner peace. In Master Li’s book, I found the answers to all the questions that were bothering me. Life became meaningful. It is a shame that I had wasted so many years of my life.

“I developed compassion for others and had no desire to hurt anyone. I’m happy to do things for others selflessly. I used to think happiness was buying nice things or having a good time. Now I realized true happiness lies in helping others.

“My job is driving a taxi, and I meet all kinds of people every day. I am always kind to them. If they are rude to me, I will calmly explain how their attitude affects others, and they calm down and do not curse anymore.

“I am very grateful to Master for giving me the opportunity to practice Falun Dafa. I am so lucky to be a Falun Dafa practitioner!”