(Minghui.org) May 13 is World Falun Dafa Day, and this year marks the 30th anniversary of Falun Dafa’s introduction. Mayor Cashenna A. Cross of Glenarden, Maryland proclaimed Falun Dafa Day in the city. 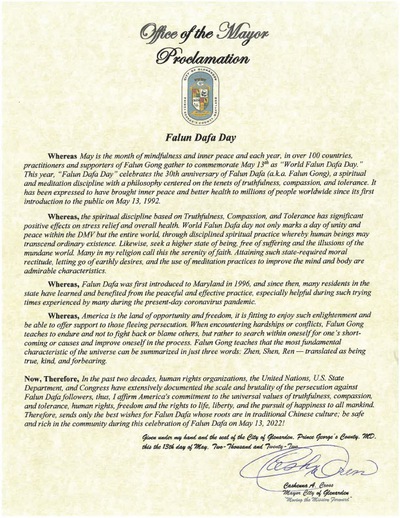 Proclamation for Falun Dafa Day from Mayor Cashenna A. Cross of Glenarden

The proclamation reads, “May is the month of mindfulness and inner peace and each year, in over 100 countries, practitioners and supporters of Falun Gong gather to commemorate May 13th as “World Falun Dafa Day.” This year, “Falun Dafa Day” celebrates the 30th anniversary of Falun Dafa (a.k.a. Falun Gong), a spiritual and meditation discipline with a philosophy centered on the tenets of truthfulness, compassion, and tolerance. It has been expressed to have brought inner peace and better health to millions of people worldwide since its first introduction to the public in May 13, 1992.”

“In the past two decades, human rights organizations, the United Nations, U.S. State Department, and Congress have extensively documented the scale and brutality of the persecution against Falun Dafa followers, thus, I affirm America’s commitment to the universal values of truthfulness, compassion, and tolerance, human rights, freedom and the rights to life, liberty, and the pursuit of happiness to all mankind. Therefore, sends only the best wishes for Falun Dafa whose roots are in traditional Chinese culture; be safe and rich in the community during this celebration of Falun Dafa on May 13 2022!”