Burlington, with a population of nearly 190,000 people in the western Greater Toronto Area, is a vibrant city. Mayor Marianne Meed Ward personally raised the Falun Dafa flag on May 4, and expressed her appreciation for the philosophy of Truthfulness-Compassion-Forbearance advocated by Falun Gong. 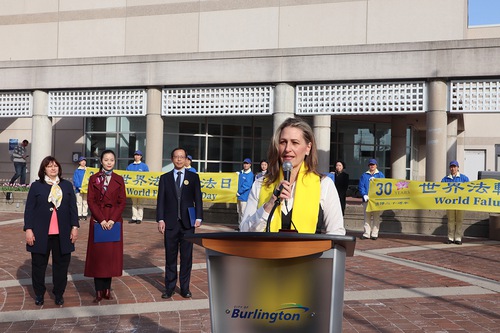 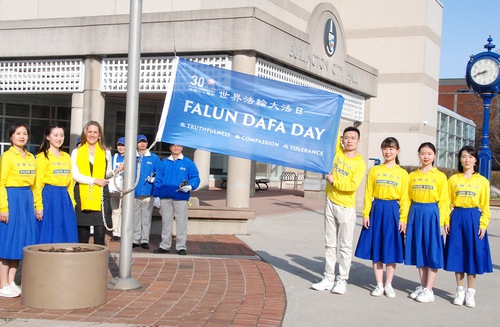 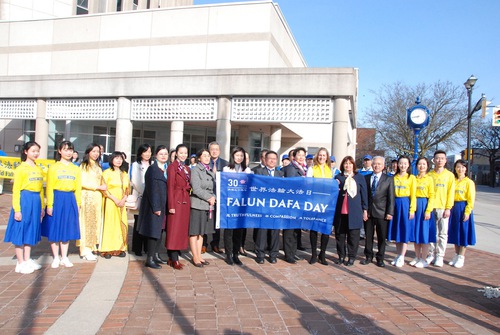 Mayor of Burlington and Falun Dafa practitioners attend the ceremony

“The values of Falun Dafa are Truthfulness, Compassion and Forbearance. I think it is these valuable qualities that have helped us come together through the pandemic. I want to thank you for all that you have done in the community to support and help each other with Truthfulness, Compassion and Forbearance, and to work together to get through this difficult time,” the mayor said.

“We appreciate Falun Dafa’s values of Truthfulness, Compassion and Forbearance, which are also the values of the city of Burlington, so we embrace them.” Mead Ward said, “You have added rich colors to our palette here in the City of Burlington, and I am grateful to you.” 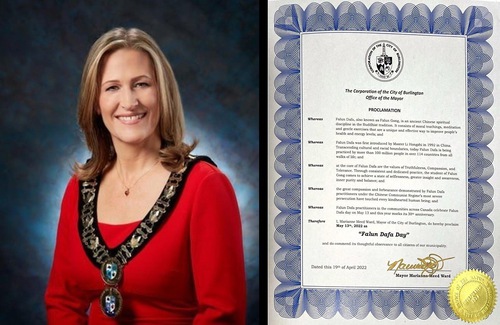 Proclamation by the Mayor of Burlington, Maryanne Meed Ward

The Mayor also said at the ceremony, “Courage is choosing to face your fears head on in order to help others. I may not be a particularly brave person, but I will do my best to work with my community in the face of hardship. I've always been very proud of our Burlington community. The residents are very united. During the pandemic, faith communities, organizations and groups of all kinds joined together and came through. They also showed truthfulness, compassion and forbearance, which is the way to keep peace during an pandemic.”

Also raising the flag on May 4 was the historic city of Kingston, which for the 14th consecutive year has honored Falun Dafa for its contributions to the community.

On behalf of the City Council, Mayor Bryan Paterson proclaimed May 13 Falun Dafa Day in Kingston. That evening the City Hall was illuminated to mark the occasion. 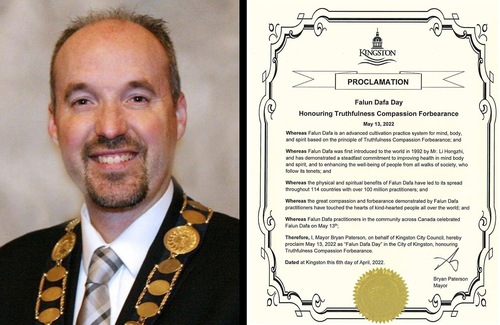 Mayor Bryan Paterson, on behalf of the City Council, proclaims May 13 Falun Dafa Day in Kingston. 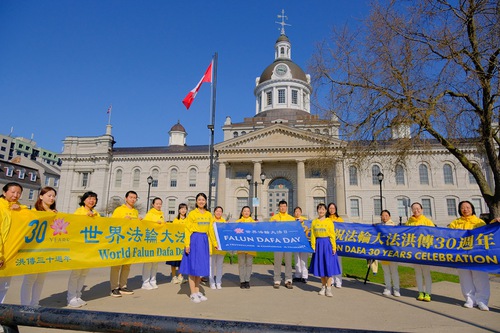 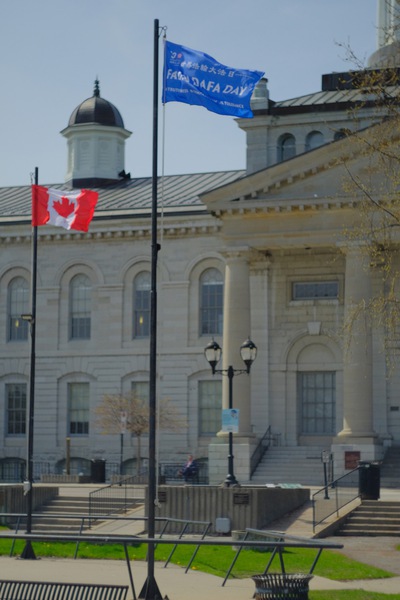 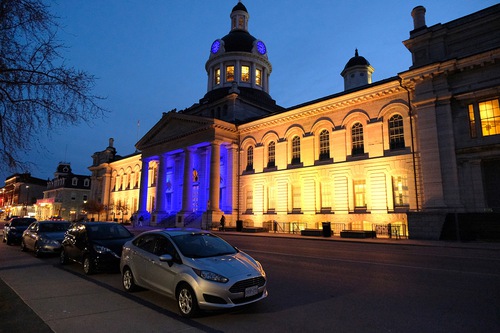 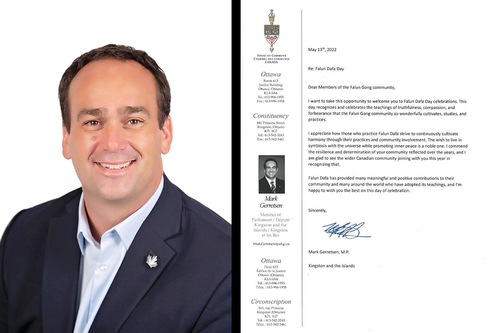 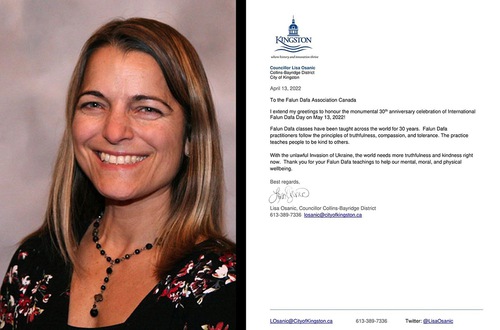 Mayor of Brock and Local MP Attend the Flag-raising Ceremony

At 9:30 a.m. on May 6, Brock, Ontario, celebrated Falun Dafa Day with a flag-raising ceremony. Mayor John Grant and MP Jamie Schmale attended the event and personally officiated during the flag raising ceremony. 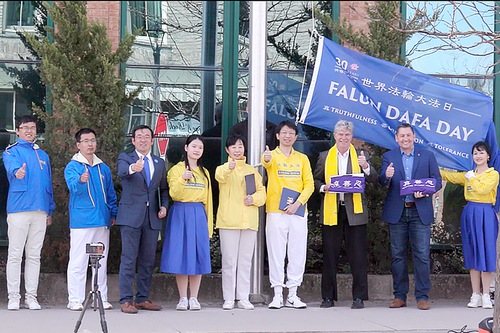 Member of Parliament Jamie Schmale, who is a supporter of Falun Dafa practitioners’ efforts to expose the persecution, said it was an honor for him to participate in the celebration. 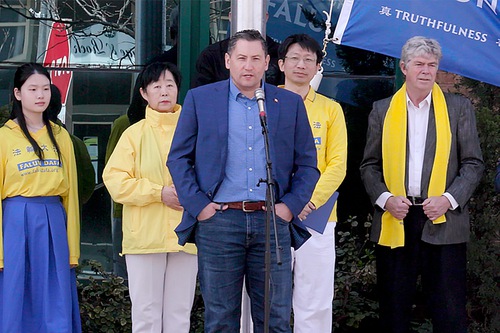 Member of Congress Jamie Schmale said, “One day, Chinese people will have the same rights and freedom as everyone else in the world.”

He said, “People have the freedom to believe and to be free from harassment, discrimination and violence. Falun Gong teaches compassion and kindness to its practitioners, so it was very important for me to come to this 30th anniversary event. I applaud the decision made by the Brock Township Council to participate in the celebration and thank everyone for coming here to mark this great occasion.”

“However, practitioners (in mainland China under the Chinese Communist Party) have been subjected to violence, harassment, and even forced live organ removal. We have heard many of these horror stories, and everyone should be concerned about this matter. In today’s society, such things should not happen under any circumstances.”

Mayor John Grant remarked, “It is an honor that you have chosen the town of Brock to raise the Falun Dafa flag on this important anniversary day. In the past, we did not have a full understanding of the beliefs of Falun Gong. Now, we know the consequences one faces in the mainland for adhering to the belief in Falun Gong. Therefore, I am happy for you all as long as you can arrive safely in Canada. Here, you have freedom of faith. We are very grateful for your arrival.”

He added, “Truthfulness, Compassion, and Forbearance are great fundamental values. Because so many people in the world are suffering in the midst of turmoil, we must treat others with compassion. We have to accept those in need from the bottom of our hearts.”

Rainbow Appears after the Flag-Raising Ceremony in Saskatoon, Saskatchewan 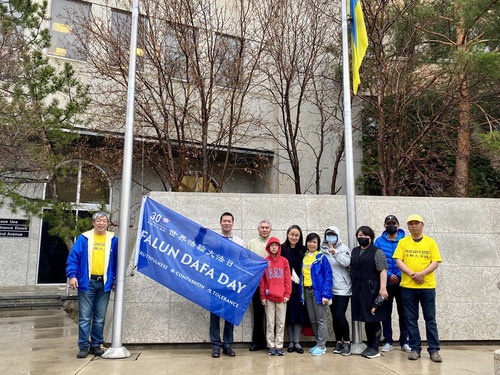 The Falun Dafa Day Flag was raised in Saskatoon, Saskatchewan, on May 6, 2022 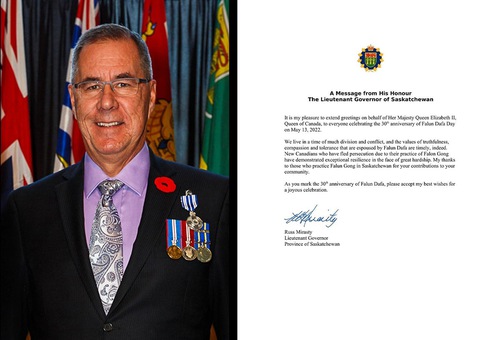 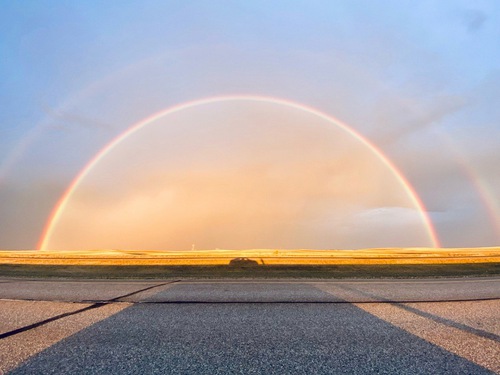 A rainbow appeared after the flag-raising ceremony in Saskatoon, Saskatchewan