(Minghui.org) Falun Dafa practitioners gathered in front of the Sydney Town Hall and the Chinese Consulate on April 22 and 25, 2022 to commemorate the April 25 peaceful appeal. They called on the Australian government and all sectors of society to help stop the Chinese Communist Party (CCP)’s 23-year-long brutal persecution of Falun Dafa.

Many passers-by praised practitioners for their perseverance in raising awareness and stopping the persecution. Some people said that those who speak up for their own beliefs when facing a totalitarian government were especially admirable. Others said that practitioners’ peaceful demeanor makes the CCP fearful. One person said that the entire world should act together to boycott it. 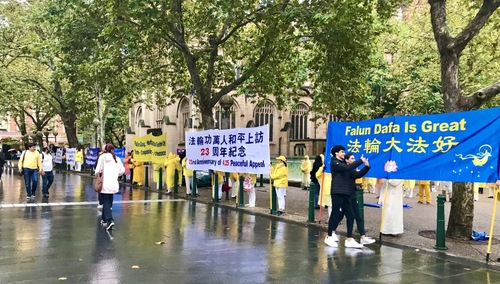 Rally in front of Sydney Town Hall on April 22 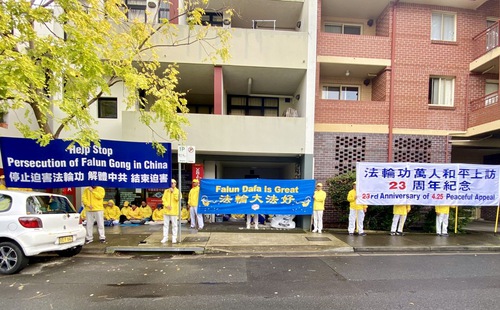 Peaceful protest near the Chinese Consulate on April 25 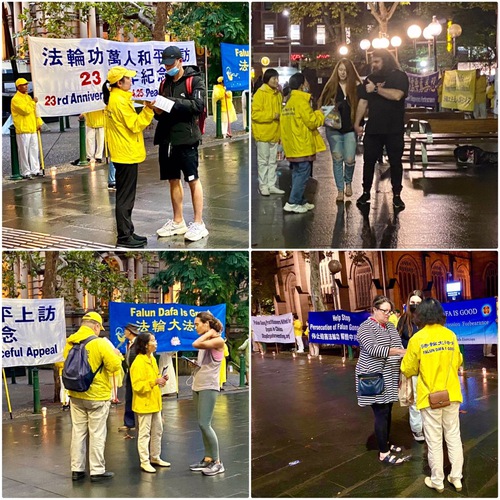 Passers-by learn about Falun Gong and sign the petition protesting the persecution.

Everyone Knows the CCP Is Evil

When French teacher Laurent Joigne was in China in 2013 and heard that the CCP was afraid of Falun Dafa, he immediately thought, “Falun Dafa must be good, because everyone knows that the CCP is evil.” 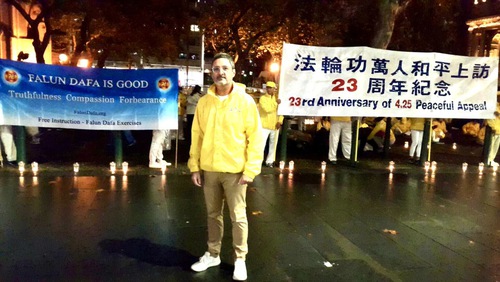 After returning to France, Laurent went to a bookstore to find Falun Dafa books to read, and in 2017 he found practitioners in a local park and began practicing the exercises with them. Practicing Dafa helped him quit smoking and drinking and other bad habits. He felt happiness and peace of mind after he began practicing Falun Dafa. He began focusing on how to be a good teacher who considers others instead of his own success. 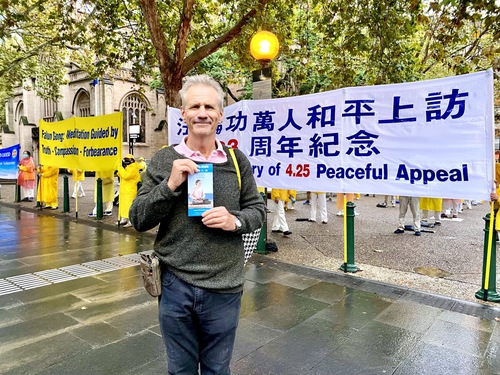 Michael and his wife saw practitioners’ candlelight vigil on April 25th when they passed by the Town Hall. Michael said, “Falun Dafa is a very good practice, which gives people physical and mental health, and helps practitioners achieve longevity, inner peace and joy.”

He also said, “By opposing the universal values of Truthfulness-Compassion-Forbearance, the CCP has now become a well-known liar on the world’s stage.”

In the end he encouraged practitioners to persist in speaking up for justice, which is very meaningful. 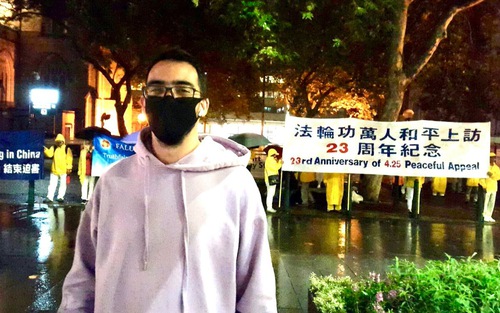 Sebastian Rancon, who works in a medical clinic and studies nursing, stopped to listen to the speakers during the rally. He said, “This is a good peaceful protest rally. I support it. Thank you, Falun Gong practitioners. More people in the world need to know the true nature of the CCP.”

He also said that the CCP violates human rights, controls the media, and blocks people from accessing factual information. He said he would tell his colleagues about the CCP’s organ harvesting from living Falun Dafa practitioners. 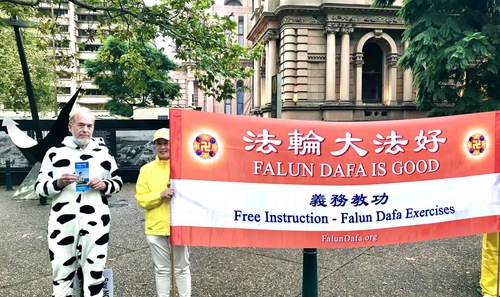 Bob Miller, a local resident, said this was the first time he’s heard about Falun Dafa and the persecution in China. After learning that the CCP conducts organ harvesting, he said, “It’s cruel. The CCP seems to be powerful, but is paranoid. The peacefulness of practitioners makes the CCP fearful. So they attack you. I think it’s amazing that you are standing here peacefully and firmly tonight, very influential, very good!” 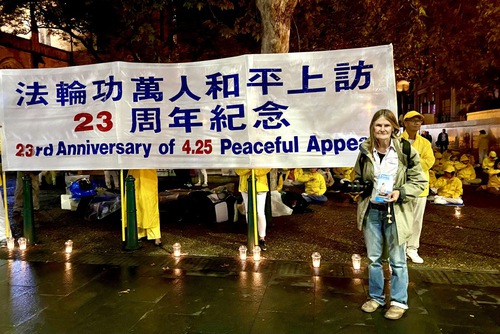 Michelle has been a professional photographer for thirty-five years. She stopped and took photos of the candlelight vigil. She said, “This candlelight vigil is different from the gatherings and parades of any other group. Practitioners’ sitting posture and body language are so peaceful. I hope more people pay attention to the brutal persecution in China.” 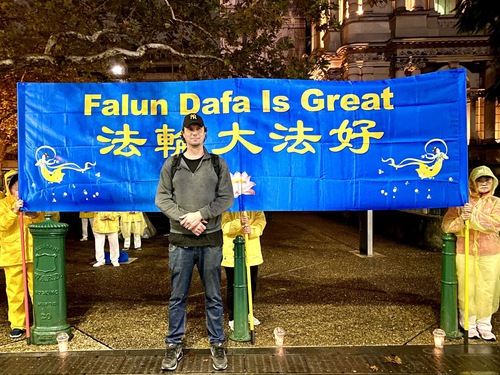 Adrian stood and watched the candlelight vigil for a long time. He said, “I admire Falun Dafa practitioners very much for standing up for Truthfulness-Compassion-Forbearance, because many people in today’s world only believe in money and power.”

He emphasized, “The suppression of beautiful belief is the most evil. Because of this suppression, human nature is distorted.” He also said that Western democracies should act together to boycott the CCP. 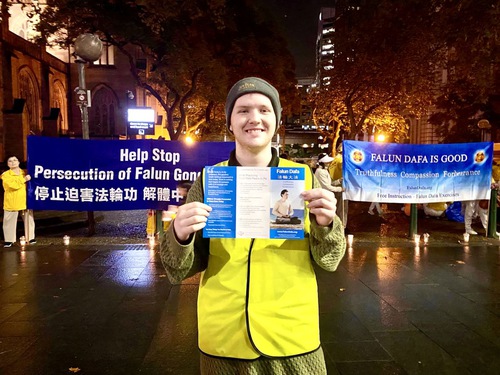 Ryan, a college student, said after seeing the solemn and peaceful candlelight vigil, “I am willing to learn more about Falun Dafa. I believe that Truthfulness-Compassion-Forbearance are the universal values of human beings. The CCP opposes Truthfulness-Compassion-Forbearance. Using selfish and coercive means to enslave people is really evil. I think it is necessary to tell more Australians so more people will support Falun Dafa and oppose this persecution.” 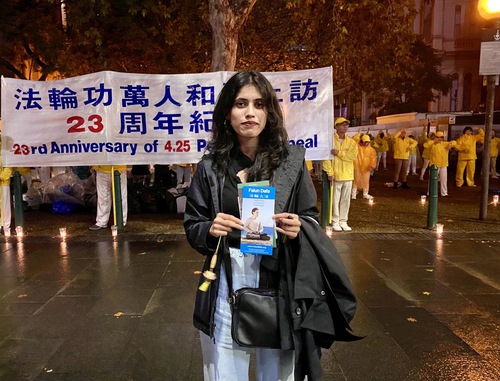 Chaithra expressed her admiration for practitioners’ courage in standing up for their beliefs. She said, “When facing a totalitarian government, it is especially admirable to speak up for one’s belief. No matter which political party is in power, everyone should have freedom of belief, so society will be harmonious.” 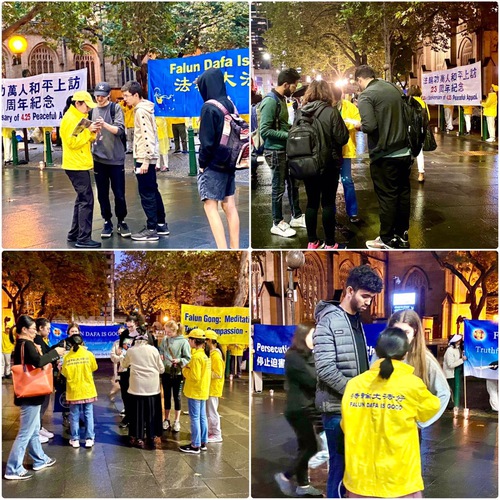 Passers-by learn about Falun Dafa and sign the petition to end the persecution.

“New Zealand: Participants in the April 25 Appeal Recall that Day During Commemorative Event Held in Front of the Chinese Consulate”

“Podcast (Cultivation): “Stories About the Early Days of the Minghui Website – Part 2””