(Minghui.org) Despite the rain Falun Dafa practitioners held a rally in front of Taipei City Hall on April 24 to mark the 23rd anniversary of the April 25 peaceful appeal. City councilor Chang Bing-chun of Keelung City and New Taipei City Councilor Chen Shi-jung came to express their support and call on righteous people to work together to stop the Chinese Communist Party’s (CCP’s) 23-year-long persecution. 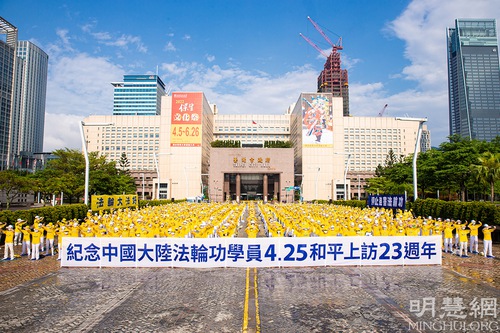 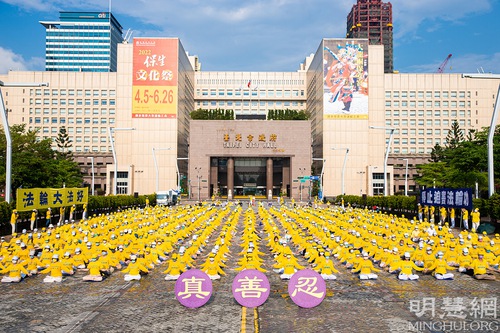 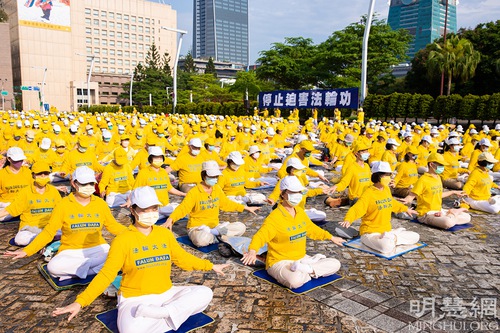 Practitioners do the exercises in front of Taipei City Hall. 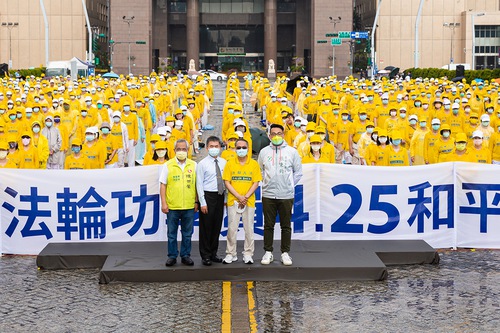 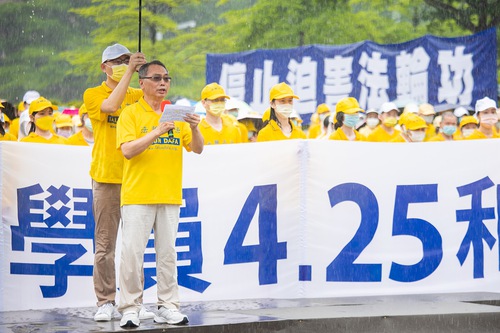 Mr. Hsiao Sung-shan said that in the past year society has become aware of the true nature of the CCP. Many people now understand that the CCP is not China. He said the totalitarian regime is bound to perish. He hoped that international organizations from all walks of life will continue to pay attention to the CCP’s persecution and stop the brutal atrocities against practitioners. He also invited people from all walks of life in Taiwan to show moral courage, support kindness, and condemn tyranny. 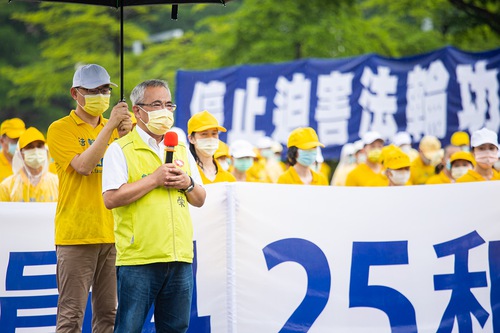 New Taipei City Councilor Chen Shi-jung said that Falun Gong practitioners come from different social strata, and regardless of age or gender, they all practice the principles of Truthfulness-Compassion-Forbearance. Under the totalitarian dictatorship of the CCP, they are subjected to brutal persecution, illegal arrests, live organ harvesting, and other vicious persecution, which are outrageous.

He said, “Practitioners can be seen freely and peacefully practicing Falun Gong in Taiwan’s parks and squares, or in many tourist attractions around the world. We stand here today to show solidarity with Falun Gong and call on the CCP to stop the repression that violates universal values, and allow Falun Gong to operate normally in China and practice the exercises freely.”

Regarding the CCP’s brutality, Councilor Chen said that human rights were a universal value. The cruelty of the CCP’s persecution of human rights is against the world’s civilization. If the CCP wants to integrate with other countries in the world, it must immediately stop the persecution of Falun Gong practitioners.

Councilor Chen also said that every practitioner possesses the power of kindness. He hopes that practitioners continue to uphold the principles of Truthfulness-Compassion-Forbearance, gather the strength of kindness, work together to stop the persecution, and call on people of conscience and keep moving forward. 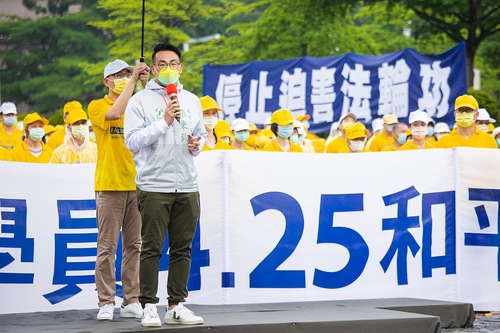 Keelung City Councilor Chang Bing-chun said, “As you all know, it rained quite heavily just now. But because of the beliefs of all the Falun Gong practitioners present and your persistence, heaven is moved and it stopped raining.”

He said that the CCP’s killing of Falun Gong practitioners, deprivation of their beliefs, and the brutal atrocities of live organ harvesting were all evils that cannot be tolerated by other countries in the world.

He said, “Taiwan is a democratic country. Regardless of a political party, we all stand on the side of democracy. I believe that Taiwanese people stand with Falun Gong practitioners. We will always stand together with Falun Gong and pursue the values of democracy together.”

He also said that he agreed with Falun Gong’s principles and would continue to support the spiritual practice along with countries across the world.

Chang Chi-hao, Keelung City Councilor, was unable to attend the rally in person but wished to express his support for practitioners and commend their perseverance in protesting the persecution.

He said that when he was studying in Canada there was a small booth set up by practitioners in front of the Chinese Consulate in Vancouver. “Since 1999, when Falun Dafa was suppressed by the Beijing authorities, it has been there. Despite wind or rain, even when it snowed, there were always practitioners at that booth, persevering. This impressed me very much.”

“As human beings, we have an obligation to stand up, support Falun Gong, and speak up for them.”

Director of the Taiwan Branch of the World Organization to Investigate the Persecution of Falun Gong (WOIPFG): April 25 Appeal Was Part of the CCP’s Sinister Scheme 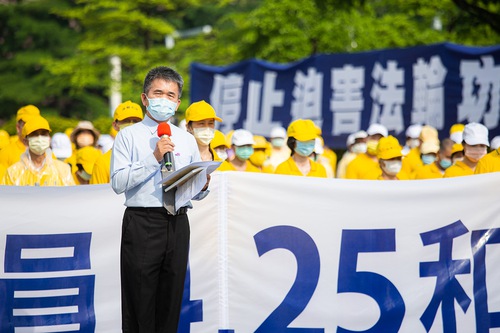 Mr. Li said the CCP claimed practitioners were besieging the Communist headquarters in Beijing when they appealed on April 25 in 1999. This was part of their scheme to slander Dafa. “After a series of insidious schemes, the CCP launched the illegal persecution of Falun Dafa on July 20, 1999. But this persecution has no legal basis and is completely illegal.”

Mr. Li said that from April 25, 1999, to today, practitioners in China have persevered in peacefully and rationally protesting, without any violence, when facing the brutal persecution and even live organ harvesting.

He emphasized, “The CCP will be brought to justice for its crimes against Falun Gong.”

“Blessed by the Extraordinary Healing Power of Falun Dafa”