(Minghui.org) Today's news from China includes incidents of persecution that took place in 11 cities or counties in 9 provinces, where at least 15 practitioners were recently persecuted for their belief. 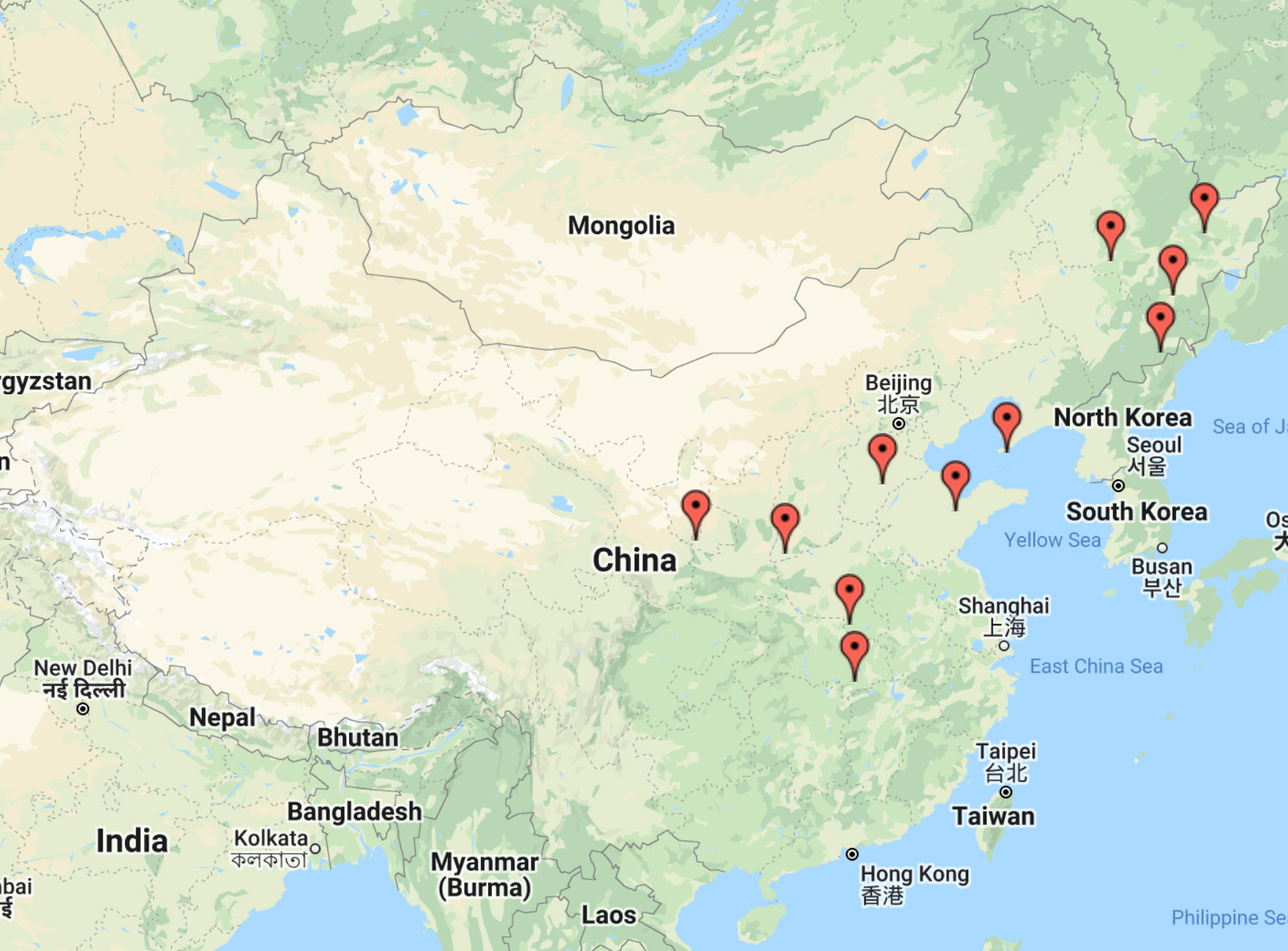 Mr. Zhang Zhihui, 55, is self-employed. He was arrested by Luo Gang, head of the Huangchuan County Domestic Security Division, and officers from the Longgu Township Police Station on July 20, 2021 when he was driving on the road to the Longgu Township. Mr. Zhang was tried online by the Xinyang Intermediate Court on April 15, 2022.

Practitioner Fu and Lin (genders unknown) were arrested by officers from the Wenhua Police Station on April 7, 2022 when they were caught by surveillance cameras while they distributed truth-clarifying materials. They were released on bail pending trial.

Ms. Sun Qingju is a kindergarten teacher in the Bajiazi Forestry Bureau. Because she posted an article on the Minghui Website to expose the suspension of her pension, she was arrested by officers from the Bajiazi Town Police Station. Her home was ransacked.

Five officers from the Guanyue Police Station went to the home of Li Baoxian (gender unknown) around 6 p.m. on February 9, 2022. They confiscated a wall calendar, a wall poster and a printed copy of Falun Gong founder’s new article. Li was later called to the police station to fill out and sign a document, which had the questions like, where the calendar and poster came from, whether Li Baoxian still practiced Falun Gong, etc. Li didn’t answer the question whether still practicing Falun Gong and signed the document. Li was allowed to go home two hours later.

Two officers from the Guanyue Police Station went to Li’s home again on the morning of April 13, 2022. Li was told to go to the police station to sign a document with similar questions like last time. After signing the document, Li was not allowed to go but waited until another officer came in and asked Li to sign a document around 4 or 5 p.m. After finding out the document was about 7-day-detention, Li refused to sign it. The head of the police station told Li that they would come to Li’s home every day if Li didn’t sign it. Li was allowed to leave there around 6 p.m.

Ms. Yu Shoufen, 68, from the Zhongshan District, was arrested around February 10, 2022. Her younger sister later received a call, informing her of Ms. Yu’s arrest. Their mother was left at home alone. Their 88 year old mother couldn’t take care of herself and Ms. Yu was her caregiver. Her sister was informed 40 days later that Ms. Yu’s case was submitted to the procuratorate.

Ms. Wang Zangyan was reported to police for talking to people about Falun Gong in the Liufu Township Market in Jin County and was arrested by officers from the Liufu Township Police Station on April 14, 2022. Her home was ransacked. She was released in the afternoon because of pandemic. Cao Guang, head of the Jin County 610 Office, threatened to arrest and detain her after the pandemic.

Three plainclothes officers from the Fangjiazhuang Police Station went to the home of elderly Zhang Guoxi (gender unknown) around 6 p.m. on April 12, 2022. They didn’t show their IDs and started to search Zhang’s home. They confiscated Zhuan Falun and a media player.

Ms. Sun Fengjie lives in the Jianlong Apartment Complex in Jianshan District. She was arrested by officers from the Wohongqiao Police Station around 10 a.m. on April 13, 2022 because the police believed Ms. Sun distributed information about Falun Gong in the local community. Ms. Sun’s family deposited 5000 yuan to bail her out and she was released around 8 p.m. Her home was ransacked. Her computer, cell phone and Falun Gong books were confiscated.

Mr. Gao Wenke’s salary was suspended in August 2021 because he refused to stop practicing Falun Gong. After Mr. Gao signed a paper under pressure on October 16, 2021, his salary was not immediately reinstated. He has still not received four months of salary from September 2021 to December 2021.

Mr. Ma Lichun from the Zhonghexia Village of Mucun Town in the Fangzi District, and Mr. Zhu Tianfu from the Caiyuan Village of Mucun Town, rode a motorcycle to distribute information about Falun Gong and were arrested by officers from the Nanliu Police Station on April 5, 2022. Their homes were ransacked. Both practitioners were handcuffed with their hands behind their backs for two days and one night. They were also beaten and scolded. They were released on the evening of April 6, 2022. They were told that they were supposed to be detained for 12 days and fined 1000 yuan. Due to the pandemic, they were allowed to go home.

“Cultivation Journey of a 37-Year-Old American”

“How Falun Dafa Changed Me from Lost to Found”