(Minghui.org) Falun Dafa practitioners held a rally in front of the Chinese Embassy in Ottawa on April 22 to mark the 23rd anniversary of the Falun Gong April 25 peaceful appeal.

Practitioner Jack Liu, a student at Carleton University, called on the Chinese Communist Party (CCP) to end the persecution and release all Falun Dafa practitioners including his father Liu Zhoubo and Canadian citizen Sun Qian.

Judy Sgro, Member of Parliament (MP), sent a letter to the Canadian Falun Dafa Association and commended the April 25 appeal.

Practicing the Falun Dafa exercises in front of the Chinese Embassy in Ottawa on April 22, 2022.

MP: I Stand in Solidarity with Canadian Falun Gong Practitioners

“On April 25, 1999, 10,000 Chinese Falun Gong practitioners peacefully assembled in Beijing to call on China’s leadership to uphold their constitutional rights to freely practice their faith without harassment and intimidation and without state control by the Chinese Communist Party,” stated MP Judy Sgro in her letter to Canadian Falun Dafa Association on April 22.

“As co-chair of the Falun Gong parliamentary friendship group, I stand in solidarity with Canadian Falun Gong practitioners on the anniversary of their fellow practitioners’ April 25 appeal for their freedom of belief in China.”

She wrote that Falun Gong practitioners continued their peaceful efforts to raise awareness of the atrocities suffered by the Chinese people, year after year. She called on the Canadian government to urge China to end the persecution and to immediately release Canadian citizen Sun Qian, who was illegally sentenced to 8 years in prison in June 2020 for her belief. She also called for immediate release of Jack Liu’s father, who was illegally arrested and detained by the Chinese police late last year.

She stated, “As Canadians, we must not remain silent, but instead voice our concerns to help stop these atrocities.” 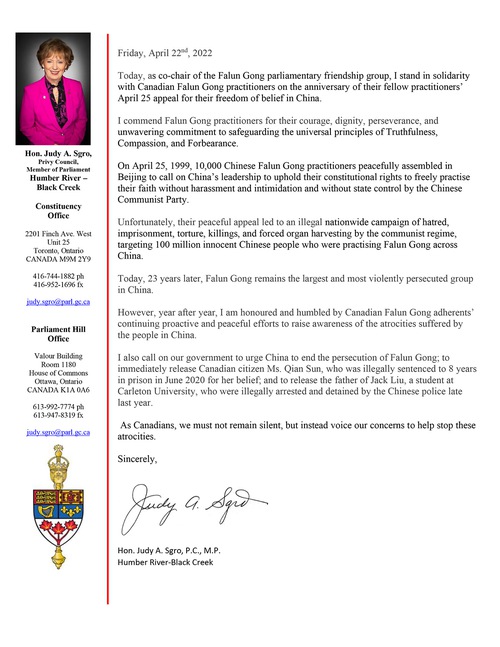 Chinese Student Calls for Release of His Father

Falun Dafa practitioners Liu Zhoubo and Cao Wen were seized by police in Langfang City, Hebei Province on November 19, 2021. Mr. Liu Zhoubo was illegally detained in Beijing No. 3 Detention Center. Ms. Cao Wen was illegally detained in the Beijing No. 2 Detention Center but was released on December 27. Mr. Liu Zhoubo was accused of using Bluetooth to send text messages about Falun Gong while traveling on the Beijing subway.

Their son, Jack Liu, is studying at Carleton University in Canada. In talking about his parents, he said, “My father practiced Falun Gong before I was born. My father is an upright person and never told lies. My mother is very sincere and considerate of others.”

He said, “I wish that the Canadian government and people, as well as all Chinese people outside of China, will not believe the Party’s lies. When the truth is fully revealed, people will find that the CCP committed genocide against practitioners, just like the Nazi crimes against the Jews.”

The CCP Commits Genocide and Crimes Against Humanity

The Canadian Falun Dafa Association issued a statement that day: “Today is the anniversary of Falun Gong’s call for peace. We commemorate the courage and dignity shown by Falun Gong practitioners who continue to risk their lives in China to defend their belief in Truthfulness-Compassion-Forbearance.”

Credible evidence reported by Freedom House indicates that Falun Gong practitioners are the largest group of prisoners of conscience in China, and they are being subjected to live organ harvesting on a large scale. The independent China tribunal, led by Sir Geoffrey Nice QC, found that the illegal organ harvesting constitutes a crime against humanity.

In June 2021, twelve UN special rapporteurs issued a statement saying that they (the CCP) were harvesting the organs of Falun Gong practitioners and other ethnic minorities in China. Human rights and legal experts also concur that this genocide is taking place.

The statement stated: “We are grateful to those around the world who have stood up with us and asked the CCP to stop the persecution of Falun Gong. We believe that soon the whole world will know the truth. When the criminals are brought to justice, those righteous people who stand with us will be proud.”

“Persecution of Falun Gong by the Heilongjiang 610 Office”

“Clarifying the Facts to the Police and 610 Office Agents”