(Minghui.org) Today's news from China includes incidents of persecution that took place in 8 cities or counties in 4 provinces, where at least 14 practitioners were recently persecuted for their belief. 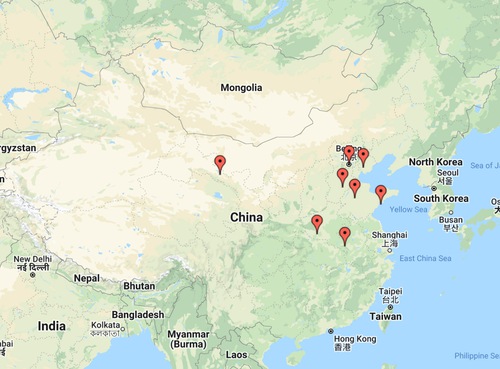 The Yanqing Court is scheduled to try Ms. Wu Fangling, Mr. Guo Jinshan, Ms. Yang Jinxiang, and Mr. Han Shimin via a remote video hearing at 9:30 a.m. on April 8, 2022. Their families requested an in-person hearing, which was turned down. Their families’ request to postpone the trial was also not granted. The court responded that the case had dragged on for too long. Mr. Han Shimin is in poor health. He has blood in his urine, and he has been in critical condition many times.

Ms. Liu Jinping, 68, is retired from the Meishan Hydropower Station. She was reported to the police in 2021 because she distributed information about Falun Gong. She was taken to the Meishan Police Station by Li Yonghe, head of the Domestic Security Division of the Jinzhai County Police Department, and other officers. She was held for 15 days. Six months later, she was indicted by the Huoshan Procuratorate and the Huoshan Court in Lu’an City. She is scheduled to be tried in the Huoshan Court at 8:30 a.m. on April 13, 2022.

The case against Ms. Li Zhijun, Mr. Han Jinjing, and Ms. Gao Xiuping has been filed in court.

The authorities of the Tiantanghe Women’s Prison claimed around March 29, 2022, that they convinced Ms. Jia Fengzhi to agree to take injections to treat her low platelet count. They said that Ms. Jia Fengzhi’s platelet level had dropped from 40 to 24 recently. When they gave her an injection, her body grew numb and she began having headaches.

Ms. Cao Yixiang was taken to the Zhonghan Police Station on the evening of September 8, 2021, because she’d been reported for distributing informational brochures about Falun Gong. She was held for 20 hours and released.

The Zhonghan Police Station made a decision on September 22, 2021, to hold Ms. Cao for 15 days. That day, they took a sample of Ms. Cao’s blood for the purpose of DNA examination.

The Chengyang No.3 People’s Hospital forced Ms. Cao to have a complete physical exam on February 22, 2022. While preparing to send back Ms. Cao to the Pudong Detention Center, they received a notice that the detention center was refusing to admit anyone because of the COVID pandemic. Ms. Cao was released.

Mr. Li Yaming was recently arrested at his home.

Mr. Wang Chaojie was arrested on March 14, 2022, and released on bail on April 1. His cell phone was confiscated after the release. His belongings, including a notebook he uses to prepare lessons, were not returned to him. No legal procedures were followed and he was never given a receipt.

Ms. Li Wenhua, 71, gave some information to a plainclothes officer while she was distributing information about Falun Gong in late March 2022. She was then followed and monitored.

At least five officers from the Dongfeng Police Station and the Wangsheren Police Station broke the lock and entered Ms. Li’s home around 4 p.m. on March 29, 2022. They ransacked her home and seized her printer, computer, Falun Gong books, photo of Falun Gong’s founder, cell phone, 4,000 yuan, and other items.

When Ms. Li returned home around 5 p.m. that day, four officers were still there. One officer asked her how she got on the Internet to get the information, who else distributed the materials, etc. Ms. Li explained the facts of Falun Gong to the police.

An officer showed Ms. Li two photos that showed her distributing information about Falun Gong in Xiaoshangpin and Bawanglu. The police arrested her and took her to the Dongfeng Police Station where they recorded what she said. They counted the items seized from Ms. Li’s home and tricked her into signing the list of confiscated items.

Ms. Li Wenhua was released on bail because of the pandemic. Officers ordered her to report to the Wangsheren Police Station after she went home. Ms. Li returned home around 1 a.m. the next day.

Mr. Liu Changming, retired, began to practice Falun Gong in August 2013 in order to recover from his illness. He filed a lawsuit with the Supreme Procuratorate in June 2015, suing Jiang Zemin who launched the persecution of Falun Gong. After that, he was frequently harassed, which left him feeling anxious and frightened. His condition began to deteriorate after two officers from the Youyili Police Station went to his home and harassed him in 2017. He passed away on March 12, 2018, at the age of 65.