(Minghui.org) Today's news from China includes incidents of persecution that took place in 12 cities or counties in 7 provinces, where at least 33 practitioners were recently persecuted for their belief. 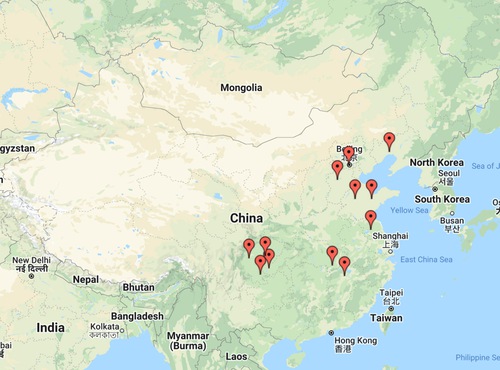 Ms. Wang Guifeng from Qingzhou City was being held in the Weifang Detention Center. When her friend went there to deposit money for her on March 9, 2022, she was told that no one by that name was being held there. Her friend later learned that Ms. Wang had been sentenced to prison. Details of Ms. Wang’s current situation is not clear.

Ms. Zhong Liwei from the Haidian District was arrested by Babaoshan Police Station officers on the evening of August 26, 2021. She was sentenced to four years in prison in March 2022.

Ms. Liu Renxiu, 58, from the Banan District was seen on video surveillance cameras when she talked to people about Falun Gong on February 22, 2022. She was arrested by officers from the Yudong Police Station. About 15 days later she was officially placed under arrest by the Banan District Procuratorate. She is being held in the Jieshi Detention Center in the Banan District.

Ms. Li Huijun from the Qingyunpu District was arrested and detained for 15 days. She returned home on March 17, 2022. Her non-practitioner sister was detained for five days.

5. [Xianning City, Hubei Province] Ms. Huang Qiuzhen Unable to Take Care of Herself Due to Abuse in Prison

Ms. Huang Qiuzhen, 60, was arrested on March 14, 2018. She was sentenced to four years in prison by the Xian’an District Court in August 2019. She appealed, but the original verdict was upheld. She was taken to the Wuhan Women’s Prison on October 23, 2019. Her relatives eventually brought her home. Due to the abuse she was subjected to in prison she is unable to take care of herself.

Zhao Yongxiu (gender unknown) from Hejiang County was arrested by officers from the Hejiang County Domestic Security Division at Zhao’s own downtown store in late August 2018. Zhao was held in the Naxi District Detention Center.

Zhao was indicted by the Hejiang Procuratorate. The Hejiang County Court had originally scheduled a trial for March 1, 2022. Due to the detention center’s lockdown during the pandemic, the trial was postponed.

The practitioners were arrested at their homes on the morning of September 10, 2019. Their homes were ransacked. They were detained and their cases were filed with the Jiangyang District Court.

Ms. Ao refused to accept the verdict and appealed. The intermediate court notified her lawyer that her case would not be heard publicly. On February 24, 2022, the court issued a ruling to uphold the original judgment of the Jiangyang District Court.

Mr. Zhao Bin from the Tianqiao District was seen on video surveillance cameras posting Falun Gong materials in late February 2022. Based on video footage, the police tracked him down to his home. They arrested him and ransacked his home. Mr. Zhao was placed in criminal detention and held in the Jinan City Detention Center.

Officers from the Mingyuedian Police Station went to Gao Yinluan’s home in Mingyuedian Village on January 25, 2022. After they coaxed Gao into going to the police station, two other officers ransacked Gao’s home. They took away Falun Gong books and pictures of the founder of Falun Gong.

Ms. Zhou Yuanzhen and Wen Maoqun (gender unknown), in their 70s, were arrested by two officers from the Suian Police Station, Yingshan County, on March 12, 2022. Both practitioners were released at 8 p.m. that night.

Mr. Yang Yifan, nearly 50, from the Wenjiang District was arrested on January 20, 2022. His whereabouts are unknown.

After Ms. Xu Na and ten other Falun Gong practitioners were sentenced on January 14, 2022, they appealed to the Beijing No. 2 Intermediate Court. Some family members submitted paperwork to defend them as family and friends. The judge said that, due to the special nature of the case, no family or friends were allowed to defend them. The judge has thus denied them their rights as prescribed by law. The trial in the intermediate court has also been postponed due to the pandemic.

“When an Adversity Seems Insurmountable, Believing in Master and the Fa Turns the Tables”