(Minghui.org) The Westminster court in the U.K. recently sentenced Mr. He Renyong to 16 weeks in prison for assaulting and harassing Falun Dafa practitioners in Chinatown. The sentence was deferred for 18 months. In addition, the accused has to complete 100 hours of community service. The accused is also required to pay the two victims 200 pounds ($259USD) each, a victim surcharge of 128 pounds ($166USD), and the court’s 500-pound ($649USD) fee.

He Renyong was charged with threatening, abusive, humiliating speech and action; harassment; and assault.

Assaulting Practitioners at the Information Booth in Chinatown 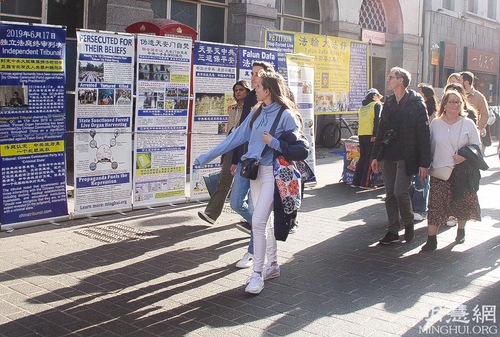 He Renyong walked past the information booth on several occasions in April and May 2021. Each time he yelled at practitioners and threw the fliers they gave him on the ground. During the last incident, incited by three others, he switched off the player that was broadcasting information about Falun Dafa and stepped very close to a female practitioner, shaking his fist at her. He threatened to kill and beat up the practitioners. He also spit on them.

He threw a can of soda pop at Falun Dafa practitioner Mr. Peng, hitting him in the calf. The entire incident was video recorded by a practitioner using a mobile phone.

Members of the public witnessed He Renyong’s unreasonable behavior and someone called the police who promptly arrived at the scene. He Renyong was handcuffed and taken away in a police vehicle.

The police contacted practitioners during their investigation and were given the videotape recording of the entire incident. He Renyong was charged.

The case was heard in a local Westminster court on February 3, 2022. He Renyong denied the charges and claimed he was instigated. Police invited two practitioners to give testimony and played the video recording of He’s assault in Chinatown.

Police are looking for He’s accomplices – the person who handed him the can of soda pop from behind and instigated him to use it as a weapon to assault practitioners.

After the sentence, the metropolitan police sent a letter to practitioners who testified in court, thanking them for their help, pointing out that the evidence they supplied was extremely important.

Learn the Truth and Distance Oneself from the CCP

According to Falun Dafa practitioners, assaults on practitioners outside China are usually backed by the CCP. Chinese who are deceived by the Party’s propaganda are used by the regime, as was He Renyong during this incident. He was arrested on the spot yet his instigators vanished instantly. In the end, he stood alone in court and faced all the legal punishment.

Mr. Peng said practitioners did not intend to report the assault to the police and tried to explain things to He Renyong kindly. Passersby with a sense of justice called the police who swiftly brought charges and began investigating. This is a reminder to those acting behind the scenes – don’t think you can do whatever you want in Western countries, this is not China, but a society ruled by law.

Mr. Peng hopes He Renyong will learn a lesson, learn the truth about Falun Dafa, and will stop being used by the CCP.

“My Family Problems Are No Longer Difficult”