(Minghui.org) Today's news from China includes incidents of persecution that took place in 12 cities or counties in 7 provinces, where at least 19 practitioners were recently persecuted for their belief. 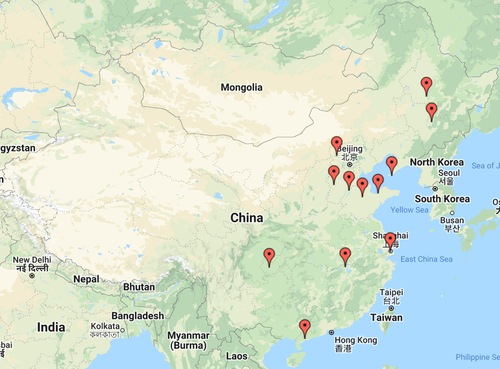 Mr. Zheng Dahai, 49, from the Zhongshan District was arrested at home on April 2, 2021. His home was ransacked. Mr. Zheng has been detained in the Yaojia Detention Center and was tried online. It was learned recently that he was sentenced to two years in prison.

Mr. Ma Shuguang and Ms. Wang Guilan were arrested in the Zhoucun District on November 11, 2021. They were released on bail pending trial three days later due to their health issues.

Mr. Ma and Ms. Wang were tried in the Zichuan District Court on February 16, 2022. The verdict has not yet been announced.

Ms. Liu Hongxia was arrested by Baiyun Street Police Station officers in the Xigang District on October 28, 2021. She was held in the Dalian Detention Center. Her lawyer learned that Ms. Liu was hospitalized when he went to the detention center to visit her on February 28, 2022.

The judge informed him a few days ago that her trial would be held in the hospital since Ms. Liu was not in critical condition. Her family members would not be allowed to attend.

Ms. Zhang Shumin, in her 70s, was a retired teacher. She was sentenced to prison in 2018 for clarifying the truth. In 2020 she was operated on for lung cancer while she was in the Shandong Province Women’s Prison.

Ms. Zhang was released in August 2020. Her pension was suspended. Her daughter was told to return the pension she’d received while she was detained. Despite her poor health Ms. Zhang was constantly harassed by the local authorities and was pressured to sign a guarantee statement.

When Ms. Zhang was paralyzed in bed and dying in November 2021, two people from the Laizhou City Judicial Bureau went to her home to pressure her to sign a guarantee statement. Although Ms. Zhang clenched her fist tightly and refused to cooperate, they forcefully held her hand and secured her fingerprints.

Ms. Li Xiaoxia from Pingyuan County is still in the Dezhou Detention Center. She is now under official arrest.

The police in the Yangpu District have harassed Falun Gong practitioners during the Beijing Paralympics, the Chinese People’s Political Conference, and the National People’s Congress. Ms. Guo Fenglian was harassed at home by officers from the Yinhang Police Station. Ms. Qian Meixia was harassed by officers from the Changhai Police Station. Ms. Wu Koudi and Ms. Cong Peixi were placed under 24-hour surveillance March 5-20, 2022.

Ms. Yu Shoufen from the Zhongshan District was arrested around February 10, 2022. Her current whereabouts are unknown.

Ms. Wen, in her 80s, from Jingjing County and Ms. Li from Weizhou Town were reported to the police for distributing information about Falun Gong in the Weizhou Market and were arrested by Weizhou Town Police Station officers on the morning of February 9, 2022. They were handcuffed and detained in a dark room in the police station. No food was provided at lunch. They were transferred to the Weishui Town Domestic Security Division around 1 p.m. After interrogating them and taking blood samples and fingerprints, the police released the two women around 8 p.m. that night.

The police went to Ms. Wu Jianying’s home at the end of February 2022 or early March 2022 and ransacked it. They confiscated her copy of Zhuan Falun and took Ms. Wu to the police station for further interrogation. She was released later. The police tore up Zhuan Falun in front of Ms. Wu before releasing her.

Ms. Ge Ling is a retired pharmacist from the Yongxiu County Chinese Medicine Hospital. Her lawsuit protesting the suspension of her pension will be heard in the Caisang District Court at 9 a.m. on March 15, 2022.

Ms. Hong Guolan, 66, went to visit her mother in Yangjiang City, Guangdong Province. She later called her family on February 12, 2022, and told them she would return home the next day. Over a month and a half later, Ms. Hong has still not returned home.

Ms. Li Xinlan is a resident of the Wanquan District in Zhangjiakou City, Hebei Province. While living with her older daughter in the Xuanhua District of the same city, she was arrested in August 2021 by officers from Beijing and the Xuanhua District. She was then taken back to Beijing, where she was recently sentenced to three years in prison.

Ms. Li’s latest sentencing stemmed from her previous arrest a few years back when she was living with her younger daughter in Beijing. She was later released and put on residential surveillance. The Beijing police got involved in her latest arrest because she moved back to Hebei Province, a violation of her residential surveillance, while her case was still pending in Beijing.

Mr. Deng Liping, 77, from Yubei District has been missing for more than a month.

Mr. Deng has been persecuted since 2003: he was arrested five times, held in brainwashing centers six times, and sentenced to one and a half years of forced labor and three years in prison.