(Minghui.org) Today's news from China includes incidents of persecution that took place in 23 cities or counties in 11 provinces, where at least 39 practitioners were recently persecuted for their belief. 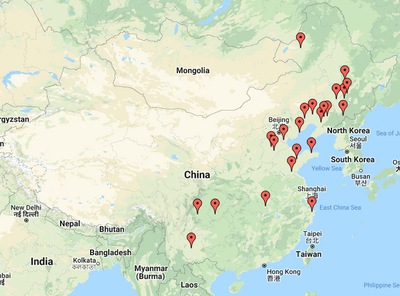 Ms. Li Caiping of Yuyao City was sentenced to two-and-a-half years in prison by the Yuyao Court in 2021. The Ningbo Intermediate Court denied her appeal on December 24, 2021. She was incarcerated in the Hangzhou City Women’s Prison on February 23, 2022.

Ms. Xu Yanping lives alone and was last seen on January 25, 2022. When her friends went to her home they found the place was messy, her Falun Gong books and the picture of Falun Gong’s founder were missing. It is suspected that she was arrested for talking to people about the persecution of Falun Gong.

Ms. Sun Yujiao of Mengyin County was sentenced and incarcerated in the Shandong Province Women’s Prison in January 2022. The sentencing date is unknown.

Ms. Song Jingxia, 60, is being held in the Hailar Detention Center for distributing Falun Gong pamphlets on February 1, 2022. The procuratorate issued an arrest warrant against her.

Ms. Fu Yanying has been incarcerated in the Shijiazhuang Women’s Prison since February 18, 2022.

Ms. Sun Yazhen, 62, was arrested in Mr. Yue Nailiang’s home when she was visiting there on February 14, 2022. She is subjected to 15 days detention and is being held in the Jilin City Detention Center.

Mr. Peng Jingjun was arrested at home on February 8, 2022. His lawyer, hired by his mother, met him in the Shenze County Detention Center on February 23. The Shenze County Procuratorate approved his arrest. He was interrogated by Chang Liwei. His lawyer and his mother checked his case in the Chengqu Police Department and were told the case might be submitted to the procuratorate.

Ms. Shi Yanying of Anshan City and Mr. Bai Xuesong of Haicheng City was tried for a second time in the Lishan District Court at 1:00 p.m. on January 7, 2022. Their attorney used the prosecutor’s material evidence and said that the police illegally arrested his clients and confiscated their items. The attorney also questioned the credibility of the interrogation records and the damage that the video recorded when the car was searched.

Mr. Bai is being held in the Anshan City No. 2 Detention Center. Guards did not let inmates buy food during the Chinese New Year season because of the pandemic. His life has been tough.

The home of Hu Shishun (gender unknown) was ransacked by more than twelve officers from the Zhongqu Domestic Security Division around 10:00 a.m. on February 13, 2022. The personal items they seized filled two cars, including Falun Gong books, a picture of the founder of Falun Gong, and recordings of Falun Gong lectures. Five practitioners, in their 70s to 80s, Li Suhua, Cheng Suying, Ms. Zeng, Ms. Zhu, and Ms. Xiao, were reading Falun Gong books in Hu’s home. They and Hu were arrested at the scene. Their homes were also ransacked. They were taken to a hospital for blood tests and physical exams and were released around 2:00 a.m. the next day.

Mr. Yu Jianchun of Zhifu District was arrested at work on the morning of February 22, 2022.

Ms. Zhu Jinxia was harassed at home by three officers from the Dongmaquan Town Police Station and village security staff around 11:30 a.m. on February 22, 2022. They tore apart a pair of couplets and a piece of paper with the Chinese characters, “Falun Dafa is Good” posted on her door. They also seized a picture of Falun Gong’s founder and an incense burner.

Ms. Sun Ping was arrested at home by officers after 6:00 a.m. on February 23, 2022. They seized her computers, printers, 1,000 yuan in paper currency with Falun Gong messages printed on them, dozens of Falun Gong pamphlets, copies of Falun Gong books, and other items. She was taken to the Minkanglu Police Station.

Ms. Xiao Shuyun was arrested and taken to the Beijinglu Police Station on February 7, 2022, after someone reported her when she talked to people about the persecution of Falun Gong in Beishan. Officers searched her, seized her home key and senior card. They ransacked her home and confiscated a picture of Falun Gong’s founder and five Falun Gong books. She was given a physical exam in the hospital, a requirement for being admitted to a detention center. But, her blood pressure was 213 mmHg, and, she had a brain blockage. The officers took her back to the police station and called her son to take her home.

Ms. Jiang Lamei of Dongchuan District distributed 2022 calendars with Falun Gong messages on them in a neighborhood on December 22, 2021. A resident reported her to the police. She was arrested at work by six or seven Dabei Police Station officers on December 23. The officers ransacked her home in the afternoon. They seized her computer, about 20 Falun Gong books, Mp3, U-drives, mobile hard drives, and a picture of the founder of Falun Gong. Domestic Security Division officers confiscated the printer from her home on January 25, 2022.

Police gave a detention notification to her family on December 24, 2021, and detained her in the Kunming City Detention Center. A formal arrest notification was issued on January 28, 2022.

Ms. Guo Hongwei was harassed at home by five Aiyou Police Station officers around 2:00 p.m. on February 23, 2022. She was cooking when they knocked on her door. They did not show any search warrant. They forcibly searched her home, seized several Falun Gong books, players, and other items.

Ms. Li Yahui was arrested by Jiangbei Domestic Security Division officers on February 16, 2022. Her home was ransacked. She was arrested before but was released because of her poor health. This time the Political and Legal Affairs Committee claimed they did not fulfill their quota and forced the officers to arrest her again. She is being held in the Baishan City Detention Center.

Ms. Zhang Xiaorong was arrested around February 10, 2022, by officers who followed orders from the Baishan City Political and Legal Affairs Committee. She is being held in the Baishan City Detention Center.

She was arrested before by officers from the Dongxing Police Department. The officers extorted a large amount of money from her. The Hunjiang District Court sentenced her to 18 months in prison to be executed outside of prison. After she finished her term, she was repeatedly harassed at home by Chen Zhongzhu and others from the Hunjiang District Political and Legal Affairs Committee. They ordered her to sign guarantee statements renouncing Falun Gong. She refused.

Ms. Li Zhijun, Mr. Han Jinjing, and Ms. Gao Xiuping of Jizhou District are detained. Their families each received a notification from the Jizhou Police Department on February 16, 2022. It said the police finished the investigation and the case was submitted to the procuratorate. The notification date was February 15, 2022.

Ms. Lu Qingzhi of Daowai District was arrested and taken to Bin County for detention on February 16, 2022. Her family was told by police to pick her up in Bin County on February 27, 2022.

Ms. Si Xiujuan was arrested in November 2021. She is being held in the Chaoyang City Detention Center.

Ms. Liu Guiyun of the Xinfu District was arrested at home on February 23, 2022.

Mr. Wang Zhongyuan of Fenghuang Township was arrested on February 17, 2022.

Ms. Guo Xiuqing was arrested by officers from the Huancheng Police Station on February 18, 2022. Her home was ransacked.

Ms. Wang Guozhi of Tiande Township was arrested on February 22, 2022. Many of her personal items were confiscated. She was released.

Ms. Wang Jinghui was arrested by Beiling Police Station officers on February 7, 2022. She is being held in the Shenbei New District Detention Center.

Ms. Qi Fenglan of Yuhong District was arrested on June 22, 2021. Her home was ransacked. She was released the next day. In December 2021, two officers went to her home to harass her.

In mid-February 2022, a Donghu Community clerk called her son and had him confirm her address. Officers were stationed in her apartment doorway on February 20 and 21. They tore apart a piece of paper with the Chinese character for “good fortune” and the horizontal couplet posted above her door.