(Minghui.org) On the evening of February 18, 2022, Falun Dafa practitioners held a rally at King George Square in central Brisbane to support the 390 million Chinese citizens who have renounced their membership in the Chinese Communist Party (CCP) and its affiliated organizations.

Australian Member of Parliament Mr. George Christensen addressed the rally and said, “390 million Chinese citizens have made the decision to quit the CCP. This is a remarkable milestone.”

Another speaker said in his speech that people should continue to promote the quit-the-CCP movement. 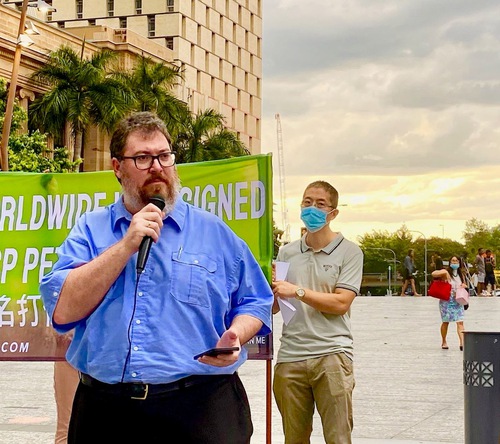 Member of Parliament Mr. George Christensen spoke at the rally.

Mr. George Christensen flew to Brisbane from Dawson to attend the rally. He said in his speech, “390 million Chinese have chosen to quit the CCP. What a remarkable milestone! I am delighted to be here with Falun Gong practitioners to celebrate this special event.”

He said, “We hope another 390 million people will quit the party because Chinese citizens are the greatest victims. There are Tibetans, Taiwan residents, Hong Kong residents and Christians in China as well as Falun Gong.”

He also said that the CCP has committed so many brutal crimes towards these groups. People should stand with them. “I hope this milestone will continue. We will see the downfall of the CCP and in its place will be a democratic China,” he said.

Leader of the Vietnamese Community in Queensland: The CCP Is Most Deceptive 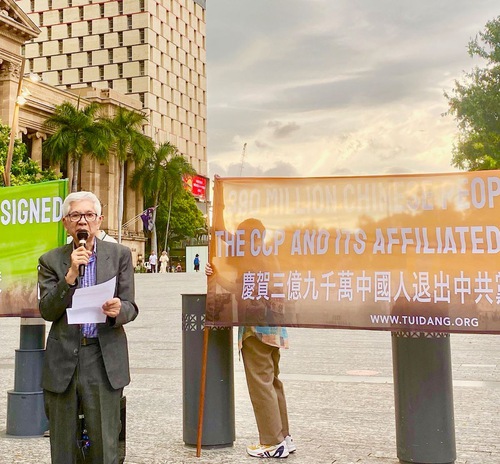 Dr. Cuong Bui, president of the Vietnamese community in Queensland spoke at the rally

Dr. Cuong Bui, president of the Vietnamese community in Queensland, has publicly spoken out in support of Falun Gong practitioners after he learned about the brutal persecution they suffered in China.

He said, “Nearly 400 million people have quit the CCP, we must congratulate this. It is an amazing achievement.”

Because Dr. Bui is from Vietnam he explained that he has a clear understanding of Communism. He said, “Communist ideology turns people into liars. It is the most barbaric, evil doctrine in the human world.”

Dr. Bui also felt that the CCP virus that spread globally has awakened many people. He said, “Look at what happened in the past two years—over 5 million people died of COVID yet the CCP reported that there were only 4654 deaths in China. It is the most deceptive, authoritarian political power in the world.”

One Can Have Peace and Freedom Only by Choosing Justice 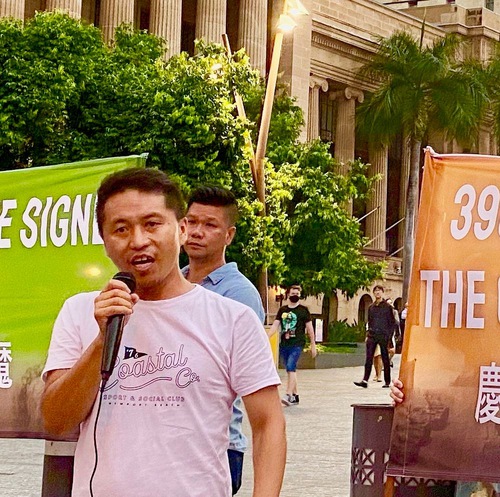 Tenzin Phuntsok Doring, a member of the Tibetan Parliament, spoke at the rally.

Tenzin Phuntsok Doring, a member of the Tibetan Parliament and human rights advocate, has been working with the Tibetan community for a long time. During the rally, he condemned the CCP’s brutalities and expressed support for Falun Gong practitioners in resisting the persecution. He said in his speech, “I am thrilled to learn that more than 390 million Chinese citizens have quit the CCP. We should continue to push this movement until every Chinese citizen quits the CCP.”

He said, “As the son of a former Tibetan “political criminal,” I too was persecuted by the CCP. This is not just a story. What the regime did to Tibetans, to Chinese residents and Falun Gong practitioners has shown that it is always interfering in people’s thoughts and freedom. In the past 70 years, they killed millions of Chinese people including Tibetans, Hong Kong residents, and Falun Gong practitioners.”

Mr. Doring emphasized, “Here, we celebrate and support those who have renounced their membership in the CCP. Only by choosing justice can one have peace and freedom.”

Those Who Quit the CCP Have a Conscience 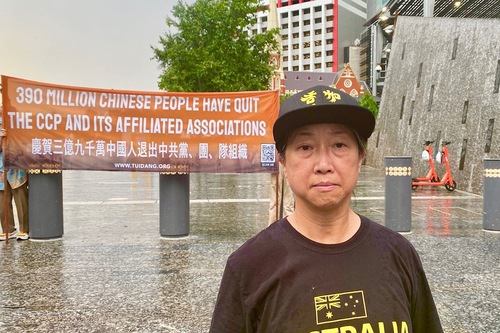 Ms. Zhang, who is from Hong Kong, attended the rally that day. She said what the CCP did in Hong Kong helped her see through the regime’s evil nature. She said, “I definitely support quitting the CCP—it is the world’s most evil Party. They did countless bad deeds.”

She added that, “Many people joined the Party for personal gain. Those who chose to renounce their membership are truly good people. Now, 390 million people have quit, they realized the truth and have a conscience. The CCP will break up one day for sure—we hope this day will come soon.”

An elderly man who made a special trip to attend the rally said, “In China, anyone who practices Falun Gong is slandered as well as persecuted. Worse still, their organs are forcibly taken and sold for huge profits. We should continue to fight for freedom and the right to belief.”

He told practitioners, “You have done well.”

Falun Dafa (also known as Falun Gong) was first introduced to the public by Mr. Li Hongzhi in Changchun, China in 1992. The spiritual discipline is now practiced in over 100 countries and regions worldwide. Millions of people who have embraced the teachings, which are based on the principles of Truthfulness, Compassion, and Forbearance, and learned the five gentle exercises, experienced uplifted health and well-being.