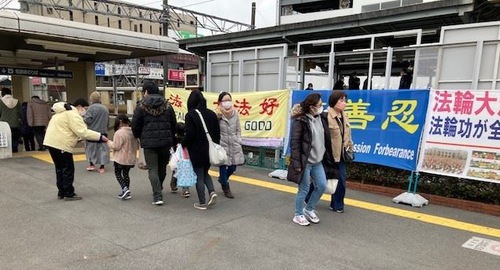 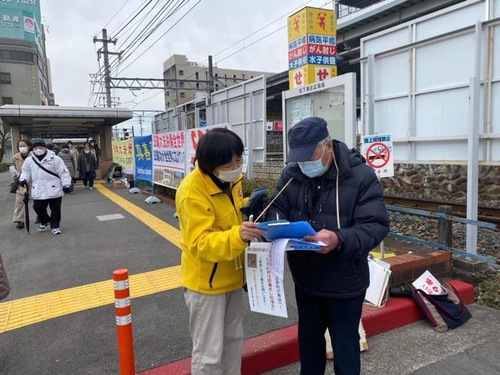 Practitioners hung up banners that read “Falun Dafa Is Good,” “Truthfulness-Compassion-Forbearance,” “Falun Dafa Is Practiced All Over the World,” and “Stop the Persecution of Falun Dafa” near the Meitetsu Konomiya station exits. They also distributed truth-clarification flyers and told people how the CCP persecutes Falun Dafa practitioners in China. Many local residents stopped to talk with practitioners.

Mr. Yamakishi listened as practitioners clarified the truth to him. They explained that Falun Dafa practitioners abide by the principles of Truthfulness-Compassion-Forbearance. The practice benefits one’s health and body. More than one hundred million people practice Falun Dafa worldwide. In 1999, former head of the CCP Jiang Zemin initiated a nationwide suppression of Falun Dafa. Many of his crimes, such as harvesting organs from illegally detained Falun Dafa practitioners when they were still alive, have been made known internationally.

Mr. Yamakishi signed the petition to condemn the persecution and told practitioners, “Keep up the good work!”

Due to the ongoing pandemic, fewer people attended the festival this year. However, many locals talked with practitioners and understood the facts about Falun Dafa. Practitioners used this opportunity to raise awareness of Falun Dafa in hopes of bringing a brighter future to the people in Japan. The activity ended around 4:30 p.m.

“Woman Sentenced for Giving Out Material about Her Faith, Son Blocked from Representing Her in Court”

“Cherishing the Opportunity to Solidly Cultivate in Falun Dafa”