(Minghui.org) “In today’s world, so many people are persecuted for their ideas, opinions, and beliefs. This cannot be tolerated,” said Michael Mosiman when he stopped by an event held in Limmatquai, Zurich on October 29, 2022. He said he hopes his signature helps stop the Chinese Communist Party’s (CCP) persecution of Falun Dafa practitioners in China. He also asked his friend to sign the petition calling to end the CCP’s brutality. 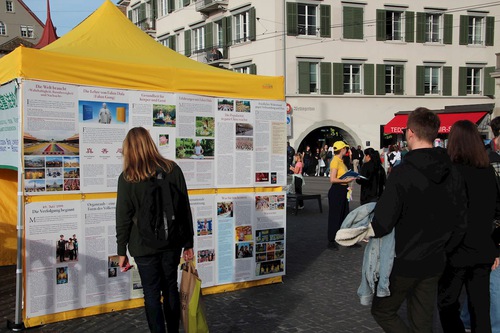 Practitioners held an event in Limmatquai, Zurich on October 29, 2022 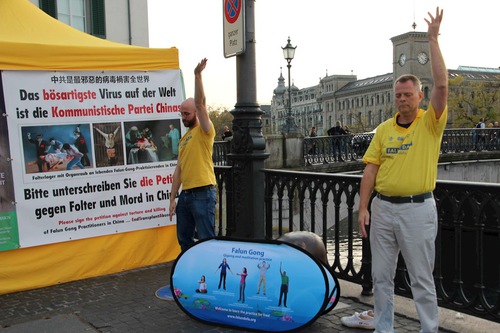 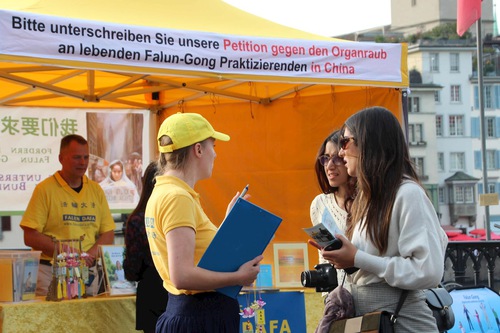 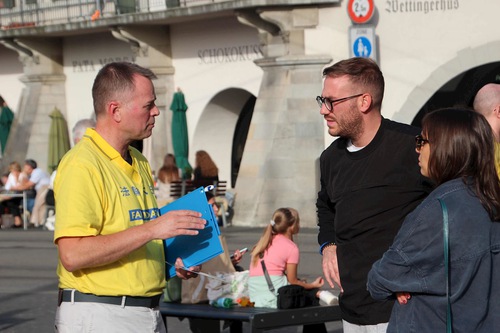 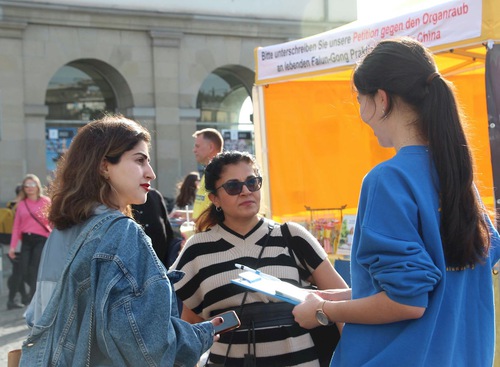 Many passersby were drawn by the exercise demonstration and stopped to read the banners. They read the display boards with information about the persecution and organ harvesting atrocities, custom killing practitioners for their organs. Some went directly to sign the petition, while others talked with practitioners to learn more. Many people condemned the Chinese Communist regime’s persecution and its state-sanctioned forced organ harvesting.

Flight attendant Astra and her friends all signed the petition calling for an end to the persecution. She said, “I oppose the persecution [of Falun Dafa practitioners] and live organ harvesting. Such actions are killing, and people cannot be killed for organs. It’s too evil.” 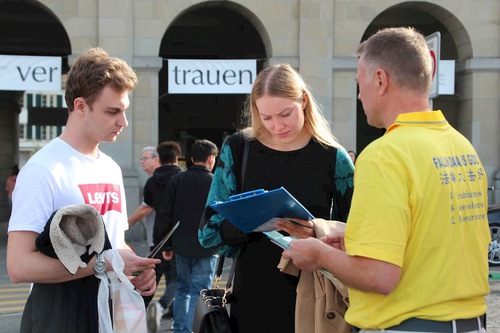 Astra said she wanted to, “speak for those [Falun Dafa practitioners] who are persecuted and tortured. I will pray for them. I hope they can be helped and stop this persecution. It’s really terrible.

On the left side of the booth were twelve display panels with information that comprehensively introduced Falun Dafa, how it spread around the world, and why the CCP persecutes Falun Dafa. Many people stopped and read them.

Simona Spadin read the information and said this was the first time she heard about Falun Dafa. After reading how the CCP harvests organs, she immediately signed the petition. 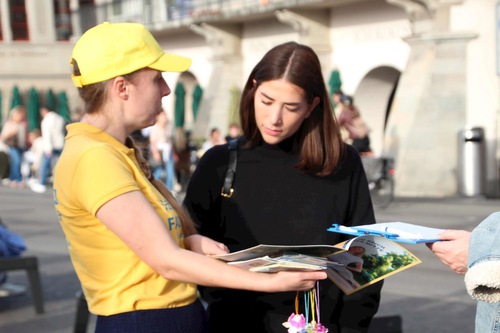 She said, “Everyone should be able to have their own beliefs. This persecution is so bad. It can’t be ignored.” Simona said she hopes her signature will help stop the evil deeds and that more people will hear about it.

Fabio Hernandez stopped and watched practitioners meditating. After listening to a practitioner’s introduction, he immediately signed the petition. He said, “Everyone should come and sign. So the signature form can be submitted to the Swiss federal government, which can see these demands and take action.”

He learned that Falun Dafa teaches people to be good according to the principles of Truthfulness-Compassion-Forbearance, and he said this was great. “The persecution of Falun Dafa is really bad. People should practice the exercises freely, because this [practice] allows people to feel happy and relaxed, and the practice looks spiritual and extraordinary.”

He said he would tell more people what he learned and hopes: “Those [Falun Dafa practitioners] who are [illegally] imprisoned should live freely, just like we do in Switzerland.” He encouraged practitioners to keep up their efforts to tell people about the persecution.

The Organ Harvesting Must Be Stopped

Jandris Gonzalez from Cuba said he read about Falun Dafa on the Internet and learned the exercises at a group practice site. After returning home, he did the exercises again by following the instruction video. He said, “[Doing the exercises] makes me feel calm and I’m able to concentrate. I felt that I was purified, and it was like an electric current passing through my body. I felt very good.”

He said his experiences while living in a communist country also helped him clearly understand: “The Communist Party oppresses people. People have no freedom and cannot live normally. This is a very bad system.” He said, “All people in China should have the freedom to practice Falun Dafa.”

“Adventures in Truth Clarification in the Mainstream World”