Home > News & Events > Parades & Other Community Events
Stockholm, Sweden: Raising Awareness of the Persecution Outside the Nobel Prize Museum
Nov. 2, 2022 | By a Minghui correspondent in Stockholm

(Minghui.org) The golden autumn season is a great time to travel in Sweden, and the Nobel Peace Prize winners are announced in October. Tourists from all over the world and local residents get to see Falun Dafa practitioners introduce the mind and body practice outside the Nobel Prize Museum every Friday and Saturday afternoon in October. Many people expressed their respect for practitioners’ unwavering persistence in exposing the persecution in China. Many of them signed the petition to call for an end to the atrocities. 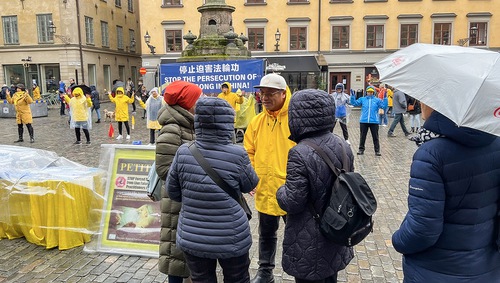 Despite the steady rain, practitioners demonstrated the exercises in front of the Nobel Prize Museum. 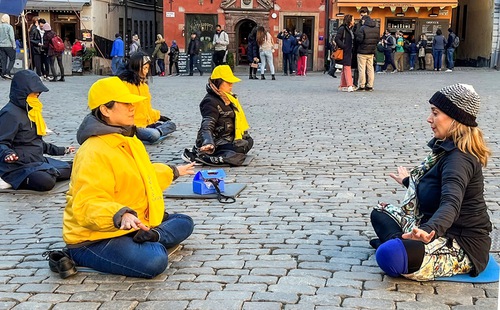 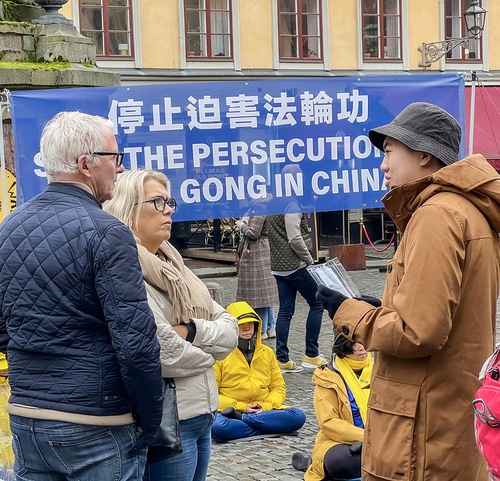 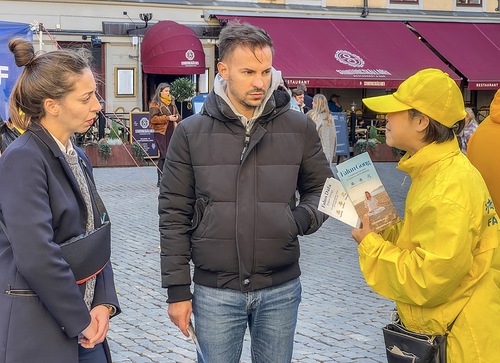 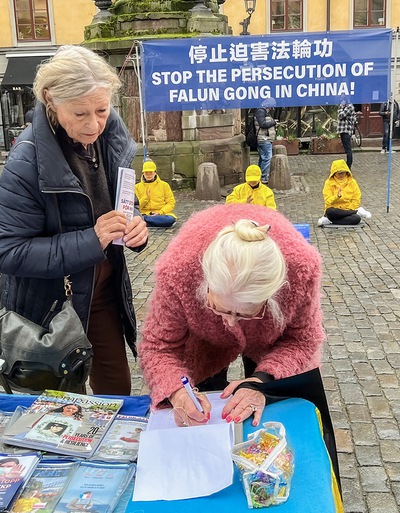 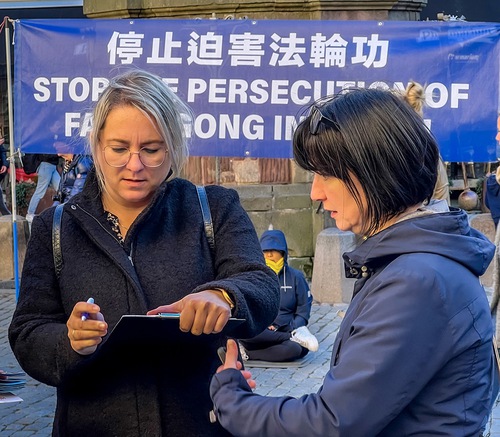 People sign the petition to support ending the persecution in China.

The first thing people saw outside the entrance to the museum was a large banner with the message “Stop Persecuting Falun Gong,” neatly arranged boards displaying information, and practitioners doing the exercises. The calm atmosphere was a unique scene outside the Nobel Prize museum attracting passersby to stop and learn about Falun Dafa. Some learned the exercises on the spot.

Bad Weather Cannot Stop People from Learning about the Persecution

Emily, from the U.S., is currently studying in Germany. She did not hesitate to sign the petition after learning about the persecution. She said that she gained a lot from this trip to Sweden. She then told practitioners about her experience while living in Ningbo, China several years ago.

“I know the Chinese Communist Party (CCP) is bad. They killed many people during the student protest on June 4, 1989. However when I went to Tiananmen Square and asked people around me what happened there on June 4, 1989, no one replied. I could not find any information on the Internet. It was as if the massacre never happened. I found it hard to believe. Now, I understand how the CCP suppresses human rights and censors the Internet in China.” She said she was grateful to meet Falun Dafa practitioners who answered her questions and helped her see the true nature of the regime.

Several young people from Portugal, Belgium, Latvia and Argentina who were on holiday in Sweden thought it was inconceivable that such a peaceful practice they saw in front of them was so brutally persecuted in China. They signed the petition after talking to practitioners. They were keen to know more about Falun Dafa and were happy to receive fliers in their native languages. They exclaimed: “Wow! Falun Dafa is indeed practiced all around the world!”

The skies cleared after the rain. Ms. Li, who was born in the 1980s and recently moved from China to Sweden, stood in front of the display board and chatted with practitioners. A practitioner cited his personal experiences of being persecuted. He told Ms. Li that Falun Dafa is an upright cultivation way that teaches one to be a good person. Anyone can go to the website to download information on the practice for free.

Ms. Li listened intently and was shocked at first. She then kept nodding in agreement. “In China we don’t know what Falun Dafa is and the CCP doesn’t want us to learn the truth. All we hear in China is propaganda that vilifies Falun Dafa. I believe what you tell me. The CCP will resort to anything to maintain its power. It is very terrifying to live in China now. People don’t feel secure. You’re not told that what you said is wrong, but you’re labeled unpatriotic and against the CCP. For the sake of our children, we would rather give up everything and leave China.”

Ms. Li agreed to renounce her Party membership. She bowed to the practitioners to express her gratitude before leaving and accepted the informational materials they offered her.

The Truth Brings Hope and Brightness to People

There were many visitors to the Nobel Prize Museum on October 28 and 29. 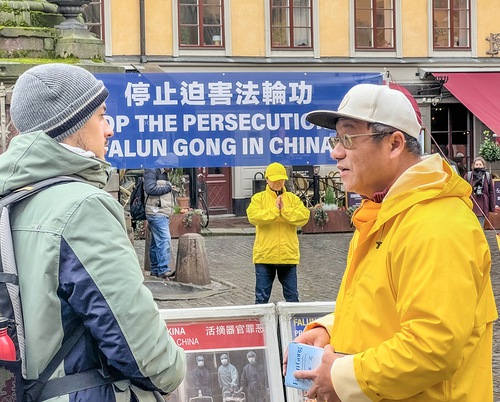 John (left) from Italy said that he learned a lot about Falun Dafa through chatting with practitioners. He thinks Falun Dafa is extraordinary and said he will definitely find out more about it.

John from Italy stopped to read the information on the display boards, then he went to the table to sign the petition and asked practitioners for more information. He said, “Is there no way to resolve this persecution?” Practitioners told him, “Telling people the facts is the best way. The CCP has been deceiving people with lies. That’s why practitioners have been using various ways to help more people learn the truth, see through the lies and end the persecution.”

He said, “Now I understand: This is like the golden pyramid, you stand on a higher level just like gods in the past. You deal with this in a different way and the problem will be resolved in the end.” He thought Falun Dafa was extraordinary and plans to learn more about the practice. 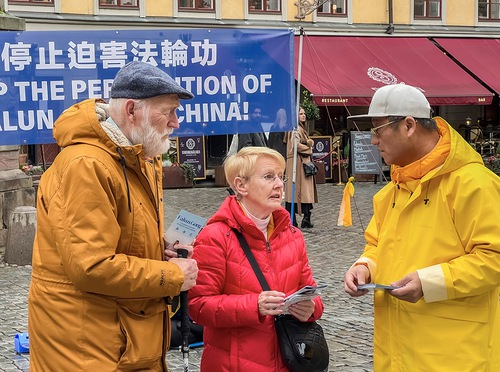 An elderly couple from Northern Ireland said that they saw brightness and hope after seeing practitioners spreading the truth to help people realize how bad the CCP is.

Another elderly couple from Northern Ireland read all the information on the display boards, and then they spoke to practitioners for a long time.

They said they had been paying attention to the human rights problem in China for years. They were particularly angered and disappointed by the regime’s suppression of Hong Kong and by the CCP’s barbaric foreign diplomatic policies in recent years.

They were delighted to see practitioners clarifying the facts in front of the museum. The couple signed their names on the petition and kept thanking practitioners. They both said, “You are doing a great thing!”

People Help to Spread the Truth

A Polish woman who speaks Chinese was shocked to learn of the persecution. She explained that she taught Italian in a school in China. “I worked in China for two years and made many friends. I went to many places there. Falun Dafa is such a wonderful practice but it is so brutally suppressed in China. Yet I had never heard of it before. The Internet censorship in China is incredible. When I talk to friends in China now, many told me ‘you don’t know how we live in China now.’” She thanked practitioners for helping her know about Falun Dafa. She said she has a deep interest in traditional Chinese culture and will pass on the truth to more Chinese people.

Federica and her friend were angry when they learned of the persecution and organ harvesting. “How can the CCP treat its own people so inhumanly.!”

Federica teaches German and worked in China previously. “In 2019 I went to China to teach German. Even though I was only there for 3 months, I experienced that authoritarian country’s unjust treatment. I had to sign an agreement on what I can and cannot do when I arrived at the school. There is no freedom of speech whatsoever. I was afraid to talk about ‘sensitive topics.’ The Internet in China is completely censored. I cannot imagine how Chinese citizens can live as if nothing happened.” She and her friend praised practitioners for doing the right thing. They felt lucky to learn the truth in Sweden and said they intend to tell more people about the persecution. 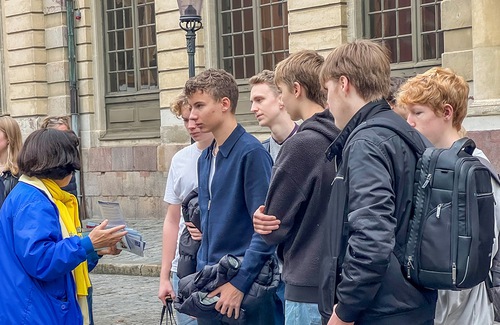 A group of high school students from Gotland Sweden learned of the persecution in China.

A group of high school students from Gotland Sweden passed by the museum. Some of them read the information while others gathered around practitioners and listened intently as they told them about the regime stealing organs from detained practitioners. They all signed the petition.

A male student told practitioners that all the students knew about Falun Dafa. They met practitioners at Almedalen Week, which is the most important forum in Swedish politics held annually in Sweden each summer. They thought it was meaningful to sign the petition calling for an end to the persecution that day.

“Disintegrating Evil and Clarifying the Truth to Police Officers”