(Minghui.org) On weekends Falun Dafa practitioners in Sweden hold activities to introduce the spiritual discipline and raise awareness of the Chinese Communist Party’s (CCP) 22-year-long persecution. They demonstrate the exercises, distribute information and collect signatures at Mynttorget, near Stockholm’s old town. Despite the coronavirus pandemic, the area is bustling with people shopping for Christmas and New Year. 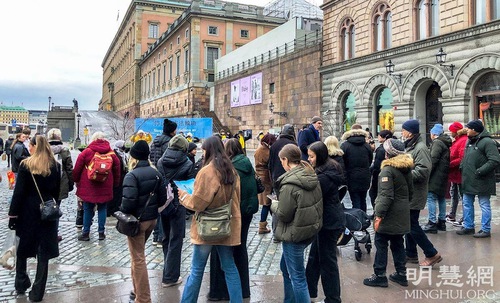 Practitioners hold activities to clarify the truth at Mynttorget next to the Parliament Building in central Stockholm every weekend in December. 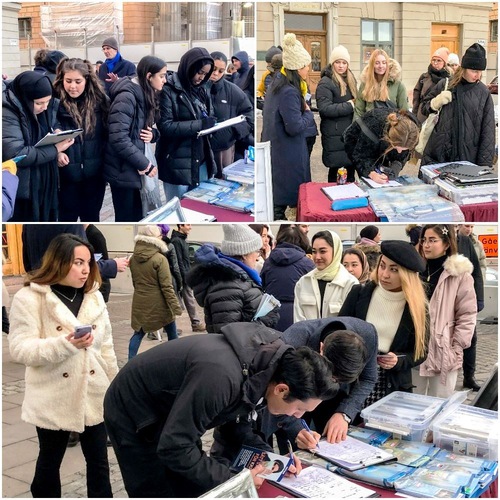 People sign the petition to condemn the persecution of Falun Dafa. 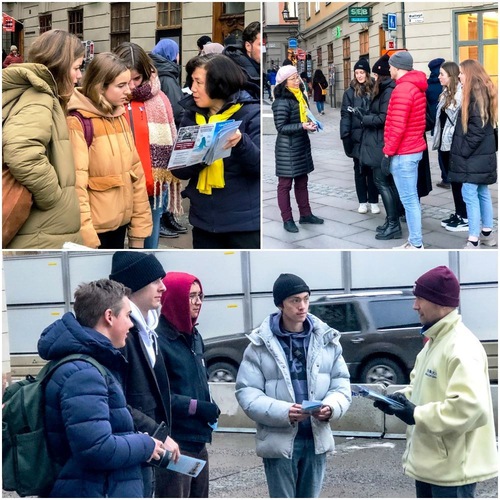 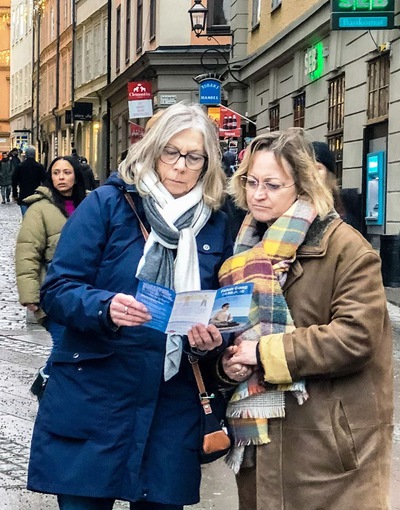 People stop and read the display boards and talk with practitioners to learn about Falun Dafa.

“The Exercise Music is Wonderful”

“Wow! Where does this music come from?” asked Erik, who was passing by the practitioners’ event one cold Friday afternoon, “It seems to be coming from the distant sky, passing through the top of my head and touching my heart. It’s so wonderful.”

When he was told it was the Falun Dafa exercise music, he accepted a leaflet from a practitioner, and said, “This exercise is definitely extraordinary. I have to learn more.” He also said that Falun Dafa brought warmth and light on a cold winter day.

The practitioner showed him the link on the leaflet and explained that he could download the music and books from the Falun Dafa website. Erik said he was pleasantly surprised, and said he would read the information and download the music. He said that in the current complex and chaotic environment, it seemed that Falun Dafa gives people a sense of tranquility and peace.

A middle-aged Swedish man and his daughter sat on a bench next to the practitioners’ activity and watched as they did the fifth exercise. He imitated their hand gestures.

Before leaving, he asked a practitioner in detail about the specific time and location of the group practice site in central Stockholm.

He told the practitioner that he felt very good while he watched them meditate. “I know Falun Dafa is very good. I was not interested in qigong at all before. But I don’t know what happened today. Listening to the music, I suddenly want to learn (Falun Dafa).”

Swedish Child: The CCP Persecutes Good People, It is Too Evil!

A display board drew the attention of a young Swedish boy. One photo shows two Chinese police officers savagely grabbing a female practitioner. This image caused the boy to stop and he said, “I want to find out more—why are they grabbing her?” His two sisters called their mother who was walking in front.

A practitioner began talking to the family. She explained that Falun Dafa teaches people to practice according to the principles of Truthfulness-Compassion-Forbearance. However, under the rule of the CCP, Chinese people who practice Falun Gong face arrest, like the woman in the picture on the display board.

The whole family listened carefully and signed the petition opposing the persecution afterwards. The boy said, “The CCP persecutes good people. It is too evil.” He said that he would tell his teachers and classmates about the issue.

Teacher: Your Courage in Clarifying the Truth is Admirable

On Saturday, December 18, 2021, a teacher from Berlin, Germany, chatted with practitioners and said that she learned a lot from the truth-clarification event. Practitioners answered her questions about Falun Dafa and gave her information about the CCP’s persecution of Falun Dafa, including a CD of Nine Commentaries on the Communist Party.

She said, “Thank you for letting me know about the true situation in China. This is all valuable information.”

She explained that she has a Chinese name and likes Chinese traditional culture. She has many Chinese students and friends, so she is particularly interested in what is happening in China.

She said, “I often discuss with the students in the class about the persecution of human rights and religions in China. Today I learned about Falun Dafa, which made my thinking clearer.”

She said that nowadays, the information on social media is so complicated that it is difficult to tell true from false. But the reality of good and evil revealed in the truth-clarification event shocked her.

“Today, I truly feel the unimaginable suffering experienced by Falun Dafa practitioners in China,” she said, “Your courage in exposing the CCP’s persecution is admirable. You kind people are using sincerity and kind hearts to spread the truth. Unfortunately, none of this has been reported by the media, but this is all reality.”

“We Wish More People To Stand Out Against the Persecution”

The day before New Year, Friday, December 31, 2021, more tourists and pedestrians passed by than usual. Many people stopped to read the display boards and learn about the event. Often people waited in line to sign the petition.

A middle-aged couple from Austria stopped in front of the display boards. After reading all the information carefully, they talked to a practitioner. 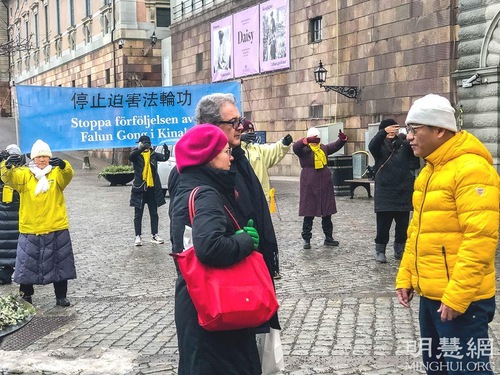 A couple from Austria said they hope more people will stand up and condemn the persecution.

It turns out that the couple watched a movie about the history of the Communist Party of the past one hundred years and were moved. The gentleman said, “This film was made very well. Without accusations, it shows a lot of facts to expose the Communist Party’s historical suppression and persecution of Buddhists and all people with beliefs, including Falun Dafa practitioners. It is shocking!”

They believed that everyone in the world needs to hear the truth. They said it is important for practitioners to use this peaceful and rational way to expose the CCP’s crimes so that more people can recognize its evil nature.

They said that when they returned to the hotel, they would sign the petition directly online and learn more about the persecution. They hope more people will stand up and condemn the CCP’s persecution and disintegrate the Party as soon as possible.

On the afternoon of December 31, two students from China who were touring Sweden passed by the practitioners’ activity site. Suddenly, one girl’s glasses broke. They hurriedly asked the practitioners where they could get them repaired. A practitioner pointed out the direction and address of an optical shop nearby, and asked them if they knew about Falun Dafa.

The girls said that they are 21 years old and are studying in Austria. They were particularly willing to listen to the practitioners’ explanation. So the practitioner explained what Falun Dafa is, why the CCP persecutes it, how the CCP uses violence and lies to persecute good people and mislead others, and why it is important to quit their memberships in the CCP and its organizations.

The two students listened carefully. With the help of the practitioner, they went to The Epoch Times website and quit their memberships in the Communist Youth League and Young Pioneers on the spot. They took photos of the withdrawal certificate numbers. Before leaving, they also accepted informational materials in English and Chinese, and a copy of the Nine Commentaries on the Communist Party.

“Reported in 2021: 1,187 Falun Gong Practitioners Sentenced for Their Faith”