Home > Perspective
When Healthy Teachers are Given Psychiatric Treatment Against Their Will
Jan. 5, 2022 | By a Falun Gong practitioner in China

(Minghui.org) On December 14, 2021, the day after the National Memorial Day for Nanjing Massacre Victims, Song Gengyi, an instructor at Zhendan Vocational College in Shanghai, voiced her doubts during a lecture, about the actual casualties of Nanjing Massacre. Her students taped her talk and circulated it widely online. She was fired two days later.

Li Tiantian, a language teacher in Yongshun County, Hunan Province, posted on social media on December 17 to express her support for Song. Two days later, the local education bureau and her family sent her to a mental hospital.

The stories of Song and Li caused repercussions and drew wide attention in China. Song lost her job, and Li, who is four months pregnant, ended up in a mental hospital, both for speaking their minds.

What many Chinese don’t know is that many healthy Falun Gong practitioners, including teachers, have been sent to mental hospitals, also for speaking their minds and appealing for their right to freedom of belief.

Falun Gong, also known as Falun Dafa, is a meditation system based on the principles of Truthfulness-Compassion-Forbearance. It has been persecuted by the Chinese Communist Party since July 1999.

Below are several examples of Falun Gong practitioners in the education system being given psychiatric treatments against their will.

Ms. Li Huiyun, who earned a doctoral degree from Tianjin University in November 1999, was an associate professor of Electrical Engineering at Hebei University of Science and Technology. Her patent won numerous awards during exhibitions in Germany, Hong Kong, and other places in 2003. Her story was also reported in People’s Daily, Science and Technology Daily, Economic Information, and China Daily. 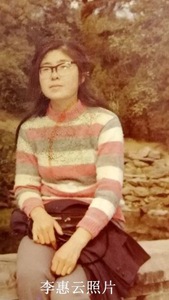 Dr. Li Huiyun was an Associate Professor at Hebei University of Science and Technology.

Because of her belief, however, officials at Dr. Li’s school and the local 610 Office sent her to a brainwashing center in 2004. She was brutally beaten, humiliated, deprived of sleep, and denied restroom use. She was later transferred to Shijiazhuang Labor Camp to serve a two-year term. During her labor camp detention, she was twice sent to the psychiatric department of the First Affiliated Hospital of Hebei Medical University. Both times, she was forced to take excessive doses of sedative and immunosuppressive drugs, which not only caused her fatigue, but also made her faint from time to time.

Dr. Li was arrested again in March 2011 and sent to Hebei Province Women’s Prison with a term of 4 years and 10 months. As a result of the abuse, she became very weak, with her face deformed. To make things worse, she also developed a mental disorder due to the abuse and lack of medical treatment. When her husband went to visit her, she did not recognize him. Her mother, who was nearly 80, was heartbroken seeing her most accomplished child abused to such a state.

Ms. Ha Jingbo was an English teacher at Dongfeng County Fourth Middle School in Jilin Province. All her illnesses disappeared after she began practicing Falun Gong and living by the principles of Truthfulness-Compassion-Forbearance. She also worked diligently and tutored her students outside of school hours without seeking any return, when many teachers charged students for extra help provided. She also declined to accept any money from her students’ parents who wanted to thank her.

After the persecution of Falun Gong began in July 1999, Ms. Ha was detained at Siping Mental Hospital twice for appealing for Falun Gong. Every day she was shocked electrically at the temples on her head, which often knocked her out, causing her to lose consciousness. After regaining consciousness, she would be forcibly injected with nerve-damaging drugs. 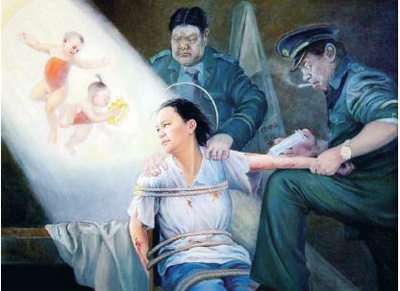 As this continued, Ms. Ha looked dull with blank looks. Her neck was stiff and could not turn. It was very frightening.

Ms. Gao Shuying, an English teacher at Tahe County, Heilongjiang Province, credits Falun Gong for curing her numerous diseases, including low blood pressure, anemia, low blood sugar, gynecological diseases, toothache, headache, and many more. With a better health and mind nature, her performance at work improved significantly and she was awarded as an exemplary teacher several years in a row. Her paper also won a prize.

Li Zhihua, from the Tahe County 610 Office and officials from Ms . Gao’s school seized her at home in January 2001 and drove her to Beian City. On the way there, they injected her with unknown drugs, which caused her to immediately lose consciousness. 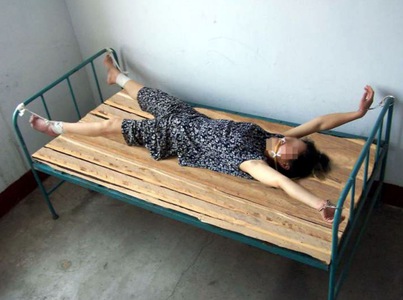 Torture illustration: Being tied to a bed in a spread-eagle position

Upon regaining consciousness, Ms. Gao found herself being tied to a metal bed in a spread-eagle position. All her clothes had been removed. She was surrounded by several men and women, who asked if she would continue practicing Falun Gong. She managed to say yes, only to pass out again. When she came to again, she felt that her head was very heavy and hurt a lot. She had trouble opening her eyes and her mind went blank. She was still tied up in a spread-eagle position but in a bigger room, where more than ten people were behaving strangely and irrationally.

Ms. Gao later learned that she was at Beian Mental Hospital and those people with weird behaviors were mental patients. She told doctors and nurses that she was a healthy person who had been kidnapped and taken there, for practicing Falun Gong. But they did not listen. When Ms. Gao continued explaining, the medical staff forced some unknown drugs into her mouth and through injection. Every day, she received seven bottles of drugs through intravenous injection. This made her entire body extremely painful.

When Ms. Gao was in a life-threatening condition, officials contacted her family to pick her up in order to shirk responsibilities. Her family was forced to pay 10,000 yuan before taking her out of Beian Hospital.

Time to Speak Up

Sometimes family members are also implicated. Ms. Zhang Caixia, a hospital employee in Baoji City of Shaanxi Province, was arrested on her way to work on August 26, 2021. After being sent to Wangjiaya Rehabilitation Center, a mental hospital, she was forced to write statements to renounce her belief in Falun Gong. When her husband went to seek her release, he was also threatened to write statements against Falun Gong, or else he’d be arrested

“We cannot remain silent on this. Otherwise, what happens to Li Tiantian could occur to any of us,” one netizen wrote. “If we are unable to rescue Li Tiantian, many more people including us or our families could face the same consequences,” another one continued.

“We hope more people can learn from this and wake up. We need to say no to the brutality,” wrote one post.

“Two Elderly Women, Including One in Her 80s, Sentenced to Prison for Their Faith”