(Minghui.org) Today's news from China includes incidents of persecution that took place in 15 cities or counties in 6 provinces, where at least 19 practitioners were recently persecuted for their belief. 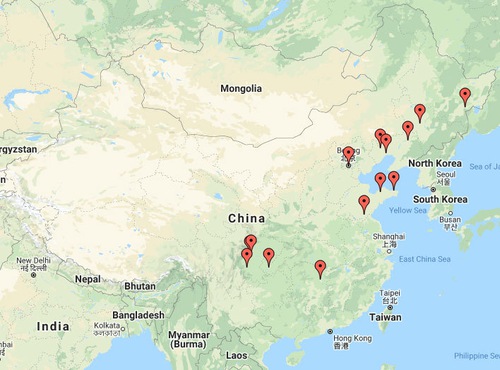 Elderly Ms. Huang Mingfeng was arrested by officers from the Jinyu Police Station while talking to people about Falun Gong in Jinyu Town on the morning of August 9, 2021. She was taken to the Mianzhu City Legal Education Center. The officers ransacked her home and confiscated her Falun Gong books.

Ms. Huang was taken to the Deyang City Detention Center on September 5, and was released on bail on November 1.

On December 8, Ms. Huang was sentenced to one year in prison with two years of probation.

Mr. Du Zhentian was arrested on September 8, 2021. He was held in custody in Longkou City. He will be tried by the Longkou Court on the afternoon of December 17.

Ms. Guo Shufen was reported to the police while talking to people about Falun Gong near the Beijiao area around 9 p.m. on December 9, 2021. More than 10 officers from the Taihe District Domestic Security Division and the Beijiao Police Station arrested her. The officers broke into Ms. Guo’s home and ransacked the place around 10 p.m. They confiscated her Falun Gong books, a printer, a computer, and over 10,000 yuan in cash.

The officers forced Ms. Guo’s family members to cooperate in answering questions with notes taken until about 1 a.m. on December 10. The family members were then taken to the police station for further questioning with transcripts until 3 a.m.

Ms. Guo is being held in the police station.

Seven people from the Jiuchi Town government and police station broke into Ms. Xu Shaoying’s home in the Jinsha Community on December 2, 2021. They pressured Ms. Xu to sign paperwork, which she refused. They forcibly spread her fingers and pressed her fingerprints on a blank sheet of paper.

Over 10 people including Party secretary Tian Wei of the Puzhao Community, Zhihe Sub-district, and officers from the Guangming Road Police Station, arrived at Mr. Wang Ershi and Ms. Chen Dingrong’s home at 8 a.m. on December 6, 2021, with a search warrant. Mr. Wang and Ms. Chen did not open the door. The officers kicked the door open. They confiscated their Falun Gong books.

Both Mr. Wang and Ms. Chen issued statements that the fingerprints that were forcibly pressed did not count, and they did not acknowledge them.

On December 3, 2021, more than twelve people from the Longfeng Sub-district Administration Office, the Junle Police Station, and Heilong Community Party secretary Zhou Lefu went to Ms. Cai Tongfeng’s home and took her to the police station. They ransacked Ms. Cai’s home and confiscated her Falun Gong books. At the police station, several officers forced her to press her fingerprints.

Ms. Long Youshi was arrested by officers from the Wujialing Police Station, Kaifu District, on December 7, 2021. She is being held in the No. 4 Detention Center.

Lu Shuorong (gender unknown) from Jiguan District was arrested by officers from the Xishan Police Station while talking to people about Falun Gong and distributing calendars near the outpatient clinic of the Jixi Mining General Hospital on the afternoon of December 10, 2021.

On December 8, 2021, a group of eight people including Xujialing Village Party secretary, the village head, and staff members of the Dadian Town Brainwashing Center, in Junan County, broke into the home of 74-year-old Mr. Xu Yansan. They coerced him to go to the brainwashing center, but did not succeed. This has put significant pressure on Mr. Xu and his family.

In May and June of 2021, the Guanying Town government and village officials and team leader Yang Wenjun went to Ms. Xu Xiufen’s house. They forced her to sign paperwork, threatening to withhold her pension payments if she did not cooperate. About eight or nine people went there a second time. They photographed Ms. Xu with their cell phones and asked her if she was still practiced Falun Gong.

In May and June this year, Ms. Song Guizhi, who lives in Shizigeng Village, was harassed twice. The first time, brigade Party secretary Wang Jihui and others went to Ms. Song’s home. Her family was eating. These people took photos with their cell phones, and said that they came to ask Ms. Song to sign paperwork, which she refused. When they went to her house the second time, she was at the farmers market, and these people asked her neighbors to sign a form, stating that Ms. Song did not go out for other purposes.

As soon as they entered her home they began photographing the place. Chen slandered Falun Gong’s founder and Dafa. When they realized that Ms. Xu could not be “transformed,” they threatened to report her to the provincial level. Finally, they forced Ms. Xu’s husband to sign. This put pressure on Ms. Xu’s family. She left home for three months before she returned.

Ms. Gong Ruiping from the Pinggu District was reported to the police on July 3, 2021. The police tracked down her cell phone signals and located her rented place. She was arrested on July 20. The police officers ransacked her home and confiscated Falun Gong keepsakes and paper bills with information about Falun Gong written on them. She was taken to the Shunyi Detention Center.

Mr. Wang Jinyou from Jinjia Town, Changtu County, was arrested by officers from the Jinjia Police Station on December 10, 2021, for distributing desktop calendars.

Ms. Niu Xia and her sister Ms. Niu Ling from Paoshoutun, Helong Town, worked odd jobs at the Jilin Province Academy of Architectural Engineering and Art. They were reported to the police by students for telling people about Falun Gong. The two sisters were recorded on surveillance cameras. Officers from the Lanjia Police Station arrested them around December 2 or 3, 2021.

On November 15, 2021, officer Zhao Jingwei from the Guojiatuo Police Station and three people from the Guojiatuo Sub-district Administration Office in the Jiangbei District, went to Ms. Tang Xianbi’s home. They searched the place, and told Ms. Tang not to practice Falun Gong. They threatened that if she did not cooperate, the future of her son and granddaughter would be adversely impacted.

Mr. Song Wenqing from Huancui District was reported to the police for talking to people about Falun Gong and distributing desktop calendars at the Yangting Town farmers market on December 6, 2021. Officers from the Yangting Town Police Station arrested him. The officers photographed him and pressured him to sign paperwork, which he refused. Mr. Song kept up righteous thoughts, and returned home two and a half hours later.

“Some Interesting Experiences I Had in Helping People Quit the CCP”