(Minghui.org) Today's news from China includes incidents of persecution that took place in 21 cities or counties in 9 provinces, where at least 36 practitioners were recently persecuted for their belief. 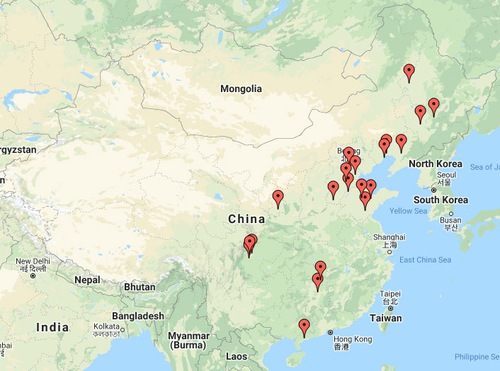 It has been confirmed that the Shigu District Court will try these six practitioners on the morning of December 22.

Six people from the Chenghua District National Security Division, the Shuangziqiao Police Station, and the Xinhongnanlu Community ransacked the home of 91-year-old Ms. Liu Chan on the morning of December 16, 2021. Ms. Liu was not at home, but her husband was. The officers took a copy machine and brochures about Falun Gong.

After Ms. Liu returned home at 3 p.m., the police went to her home again and told her that they’d ransacked her home because someone had reported her to the police for distributing information about Falun Gong.

Zhang Chao (gender unknown) has been held in the Shandong Province No. 4 Prison for over two years. Zhang has resisted the persecution in prison since December 8, 2021, refusing to cooperate or do the labor assigned by the prison. A guard called Zhang’s family, saying that Zhang would be confined if he/she continue resisting.

Zhang’s family called the guard and left messages on December 20, but there was no reply.

Mr. Xiao Shuqing, 71, from the Hongqiao District was arrested at home by Beichen Police Station officers at 8:30 a.m. on April 19, 2021. His family lost contact with him, and his current whereabouts are unknown.

Mr. Xiao has been held in forced labor camps for five years since 2001. He was removed from public office and became disabled due to torture. He nearly died twice. For more than 20 years, he has been arrested, harassed, threatened, and followed.

Ms. Lu Lizhen, 67, was transferred to the Changchun No. 4 Detention Center on November 17, 2021. The case against her has now been returned to the Xi’an Plaza Police Station by the Chaoyang District Procuratorate.

Mr. Ma Dong was taken to the Economic Development District Police Department to be interrogated at 4 p.m. on December 16, 2021, because the police found a calendar and decorative posters with words about Falun Gong on the wall in his clinic. The police ransacked his clinic and confiscated two copies of Zhuan Falun and pictures of Master Li. Mr. Ma’s wife and relatives went to the police station immediately after they heard the news. After clarifying the truth for six hours, the couple was released and returned home.

Officers from the Tanfang Town Police Station harassed Shan Yuanchun (gender unknown) on December 10 and 17, 2021. They tried to force Shan to give fingerprints and signatures on some documents but were unsuccessful.

Mr. Zhang Fuhai was taken to the Zhonghuajie Police Station from his workplace by Gong Wei, chief of the Fuqiang Township Police Station, and officers from the Baiquan County Police Department and the Zhonghuajie Police Station on December 8, 2021. The police said they would place him under surveillance after he was released from prison. They photographed Mr. Zhang without his consent and asked if he still practiced Falun Gong. They also ordered him to send his photo to Gong Wei every month. Mr. Zhang was later released.

Ms. Pan Dongmei and Ms. Yang Shulan from Meihua Town were followed and arrested when they put up flyers about Falun Gong in May 2021. Ms. Yang has been detained for two months. The Maonan District Court will try Ms. Pan at the end of December.

When Ms. Meng Xiangling from Mamuchi County was distributing brochures about Falun Gong on December 17, 2021, the urban administrative patrol discovered her and dragged her to the police station. Ms. Meng did not cooperate with the police. The police ransacked her home and took videos twice. Ms. Meng was picked up by her family around 7:30 p.m. that day.

The police found Ms. Meng the next afternoon and ordered her to sign some documents. She did not cooperate.

Ms. Yu Zhaqin from Huairou was arrested. Her case was submitted to the court.

Five practitioners from Xingcheng City were arrested by Baita Police Station officers on the night of December 18, 2021. Two practitioners were taken to the city hospital but are out of danger now.

All five are being held in the Huludao Detention Center. Their families went to deliver necessities and clothes to them on the afternoon of December 19.

Hao Hucheng (gender unknown) from Wuan City was arrested by Qiliqu Police Station officers in Shahe Town, Beijingm on the night of April 22, 2021. Hao has been held in the Changping District Detention Center. The trial was initially scheduled on December 23 but was changed to 9 a.m. December 20 and was a virtual court hearing.

Early in 2021, government authorities deceived Ms. Chen Xiaoju’s family member into signing some documents on her behalf. Ms. Chen did not know about it. They called her family again a few days ago to get her cell phone number, but they refused to cooperate.

The mayor of Shicao Township and two police officers went to Ms. Li Surong’s home in Yangdian Village on the afternoon of December 14, 2021. They ordered her family members not to move. They ransacked the home and took a laptop computer and Falun Gong books.

Soon after, officers from the Liugusi Criminal Police Division went to Ms. Li’s home and ransacked it a second time. They took flyers about Falun Gong, a printer, and personal belongings. Ms. Li was not at home at the time. The police claimed they would not leave until they caught her. They waited for hours. They later ordered Ms. Li’s family and relatives to guarantee that Ms. Li would cooperate with their orders. If not, they threatened to take her away and sentence her.

The Party secretary of Fengzhuangzi Village and four officers from the Andi Town Police Station ransacked Mr. Feng Shanghao’s home around 5 p.m. on December 14, 2021. They took two small speakers used to play the Falun Gong exercise music. They ordered Mr. Feng to go to the police station the next day and explain where he got them.

Mr. Yang Jianwei was followed and arrested by plainclothes officers from the Shuiquliu Police Station and the Shulan National Security Division on the morning of November 5, 2021. The case against him has been submitted to the procuratorate.

Ms. Tian Lingquan was harassed recently by the Shulan 610 Office. She was just released from prison on October 11, 2021. Her family has had no peace due to pressure from the 610 Office.

Gu Jun from Tongji Town and others showed up at Ms. Yang Qiru’s home around 8 a.m. on December 8, 2021. They claimed they wanted to speak to her. Gu said he would keep returning as long as she still practiced Falun Gong.

Mr. Yao Lishu was taken to the Xifeng District Police Department on the night of November 29, 2021. He was transferred to the Xifeng District Detention Center until the early morning hours of December 1 because the guards were waiting for physical exam results. The police said he would be held under administrative detention for 15 days, starting from the date he was transferred to the detention center. Mr. Yao was released on December 15.

Ten officers from the Zhangdian National Security Division went to Building 6, Jinding Park and arrested Ms. Wang Xiaoqing around 8 a.m. on November 30, 2021. It was said that the national security division has monitored Ms. Wang’s cell phone for a long time. The officers ransacked her home and took all her Falun Gong books.

The national security division called the Keyuan Police Station to take Ms. Wang and interrogate her. She managed to leave that afternoon.

“Norway: People Learn about the Persecution and Show Their Support As 2021 Ends”