(Minghui.org) With Chinese New Year just around the corner, Falun Dafa practitioners from Yilan County, Taiwan gathered at the Yilan Sports Park on January 23, 2022. They did the exercises and wished their founder, Master Li Hongzhi, a Happy Chinese New Year. They pressed their palms together in heshi (a gesture of respect), and called out in unison, “Master, Happy Chinese New Year! Falun Dafa is good, Truthfulness-Compassion-Forbearance is good!” 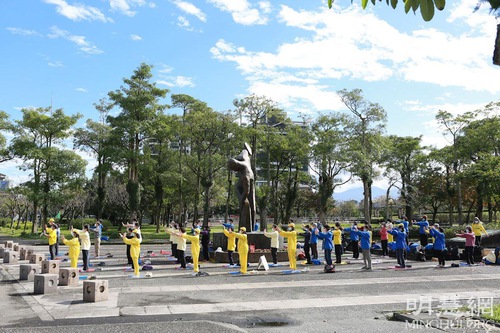 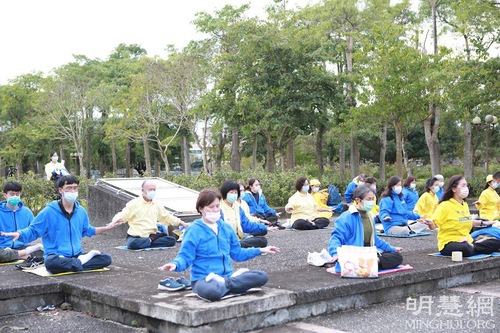 Practitioners from Yilan County did the Falun Dafa exercises to welcome the Chinese New Year.

Falun Dafa (also known as Falun Gong) was founded by Master Li Hongzhi in May 1992. The practice has spread to over 100 countries and regions and is widely received by people of all races and ethnicities. Over a hundred million people worldwide have benefited from the practice. Falun Dafa practitioners are healthy in mind and body and have high moral standards. By adhering to the principles of Truthfulness-Compassion-Forbearance they also benefit society.

The practitioners who live in Yilan County come from all walks of life. Among them are university professors, civil servants, physicians, pharmacists, nurses, engineers, teachers, college students, and housewives. Some were initially drawn to Falun Dafa because of chronic illnesses and found that they were able to abandon their daily reliance on medication after taking up the practice. Their lives were renewed as their morality and character improved. As “one person practices, the whole family benefits,” practitioners also enjoy harmonious relationships with their families.

The New Year brings hope and new possibilities and practitioners from Yilian expressed their gratitude to Master Li for introducing Falun Dafa, eliminating their chronic illnesses, and showing them the true meaning of life.

Ms. Lin started practicing Falun Dafa in 2005. Before she began practicing, she developed many ailments due to tension and exhaustion from tending her business. She was always cold and had difficulty standing since she had a weak heart. After a relative began practicing the exercises and reading the teachings she told Ms. Lin about Falun Dafa. She also began practicing and was able to let go of many attachments. Her body kept getting healthier and now she feels optimistic and young. Ms. Lin said, “I am grateful to Master. I’m now optimistic, cheerful, and healthy. Master, Happy Chinese New Year!”

Ms. Xu, 80 years old, was introduced to Falun Dafa in 1999 by a teacher at her husband’s school. Since she began practicing, her outlook on life improved and she no longer needed her medications. She learned many principles by reading Falun Dafa’s main book Zhuan Falun and understood that she should stop losing her temper. She has coordinated a local practice site for more than twelve years. Regardless of the weather Ms. Xu is always there. She also reminds her husband’s family who live in China, to quit the Chinese Communist Party (CCP) and its youth organizations. 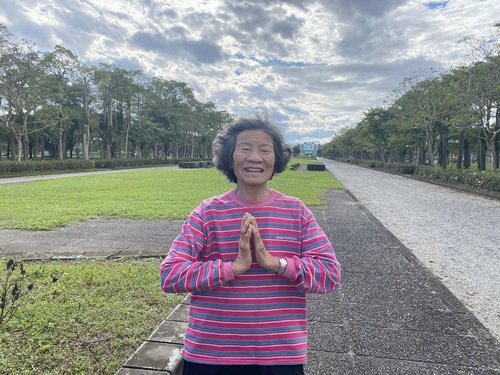 Ms. Xu no longer loses her temper after she began practicing Falun Dafa.

Mr. Weng, who is retired from a building company, began practicing Falun Dafa in 2004. He was interested in many qigong practices in the past and when he saw practitioners doing the exercises at a local school one day, he decided to try it out. He realized that, while all other qigong practices focus on the physical movements, Falun Dafa is different. Falun Dafa cultivates one's heart and is a practice of both mind and body.

He understood that he needed to abide by the principles of Truthfulness-Compassion-Forbearance. Although he still has many attachments, Mr. Weng constantly employs the Fa principles to look inward and correct his behavior. He also learned to perceive other people’s conflicts as a reflection of his own cultivation. 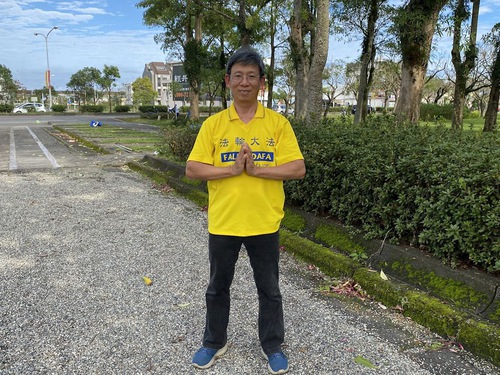 Mr. Weng calls people in China and clarifies the truth about the persecution to them.

Mr. Weng said, “The news in China is heavily censored and monitored. With Jiang Zemin, the former head of the CCP, persecuting Falun Dafa, the people in China will never know the truth. I often make phone calls to people in China and compassionately and patiently tell them about the truth about Falun Dafa and the ongoing persecution.

Ms. Zhang who lives in Wujie Township, received a Falun Dafa pamphlet in her mailbox one day in 2000. She and her husband soon started to practice and many of her ailments such as chronic colds disappeared. She also raised her moral standards to become a better person. Being the oldest among the children, Ms. Zhang was forced to work at a very young age to support the family. She also held grudges in the past towards her mother for preferring sons over daughters.

She was able to let go of her resentment, treasure her predestined relationship with her mother, and even has lighthearted conversations with her mother after she began practicing Falun Dafa. With the arrival of the New Year, Ms. Zhang would like to wish Master a Happy Chinese New Year and said that she will be more diligent, look inward, and upgrade her xinxing.

“Chinese New Year Is Coming, But These Families Were Torn Apart for Their Faith”

“Jilin Woman Sentenced for Putting Up Information about Falun Gong”