(Minghui.org) January 26 is Australia Day. Falun Dafa practitioners introduced the mind-body practice at several events held before the national holiday to celebrate the occasion. One local resident said delightedly, “This is what I have been looking for.” A well-known chef and food writer said she would keep the words: “Truthfulness, Compassion, Forbearance” in her mind. 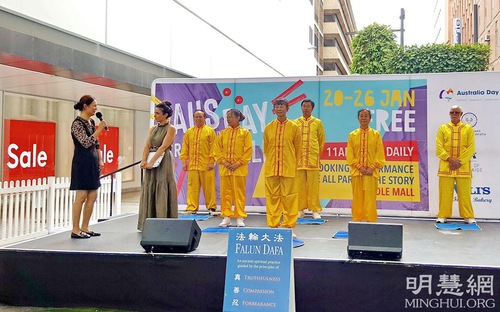 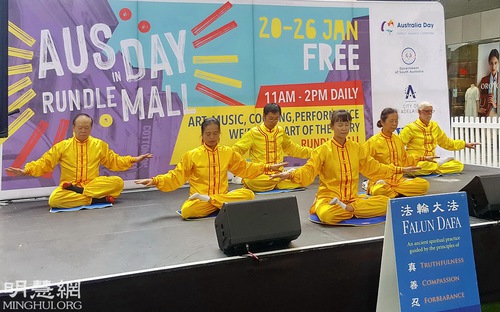 Practitioners demonstrated the five Falun Dafa exercises at an event held to celebrate Australia Day in downtown Adelaide on January 24, 2022.

Last year Adelaide was forced to cancel its Australia Day grand parade due to COVID. Instead, a series of small events were held to celebrate the occasion.

On January 24, 2022, Falun Dafa practitioners were invited to demonstrate the exercises in the afternoon on an outdoor stage in Rundle Mall. This is Adelaide’s busiest shopping district and a popular tourist destination. The organizer and Sveta Mei, representing Falun Dafa, introduced the mind-body practice. Six practitioners dressed in traditional Chinese costumes then demonstrated the exercises. Many passersby stopped to watch. Some took flyers from practitioners and some took photos and video recordings. One person even videotaped the entire exercise demonstration. Several Chinese took photos and talked with practitioners. After learning the facts about the persecution in China, many people signed the petition condemning the Chinese Communist Party for its brutal suppression of the group. 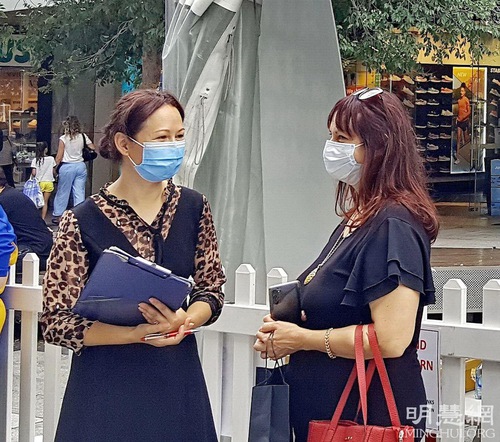 Local resident Ms. Gaynor (right) was overjoyed when told she could learn the exercises online with her husband who is ill.

Ms. Gaynor works in the city and passed by the area during her lunch break. She was drawn to the exercise demonstration and stopped to watch. She told practitioners she was under a lot of stress lately and needed to learn how to meditate. Practitioners explained that the exercises are simple to learn and told her how practicing Falun Dafa improved their health and brought them inner peace. They also told her it was free of charge to learn Falun Dafa.

She said her husband recently became very ill and he was depressed. Practitioners gave her the link to learn Falun Dafa online so that she could do the exercises with her husband at home. She was delighted and kept thanking practitioners. 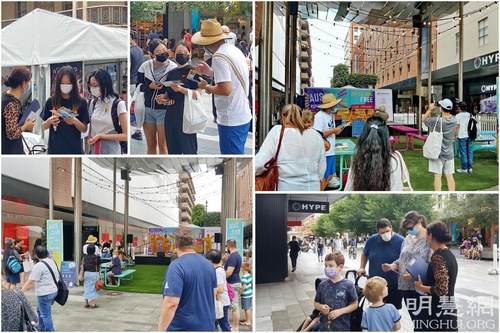 Passersby watched the exercise demonstration and signed the petition to call for an end to the persecution in China.

I Will Keep the Words Truthfulness, Compassion, Forbearance in Mind

On January 22 at the same venue, practitioners were invited by Rosa Matto, a well-known chef and food writer, to take part in a cooking demonstration. They introduced traditional Chinese foods as well as the culture of practicing cultivation. 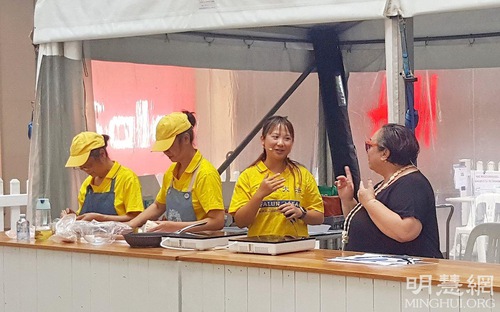 Practitioners were invited to participate in a cooking demonstration.

Last year, practitioners participated in a similar event in Chinatown and left a deep impression on Rosa Matto. As she listened to practitioners talk about the principles of Truthfulness, Compassion, Forbearance, Rosa touched her forehead and told the audience she wanted to imprint the principles in here, meaning she would keep these values in her mind. She also asked practitioners to turn around and show everyone the Chinese characters at the back of their yellow T-shirts as well as the Falun Dafa website address.

Matto also reminded everyone to remember to watch the exercise demonstration that would be held in the same place two days later.

This Is What I Have Been Looking For

During the COVID outbreak, many Australians went to the beach to exercise and relax. Practitioners went to Glenelg beach to do the exercises and they held a car tour displaying messages about Falun Dafa. They were welcomed by local residents. 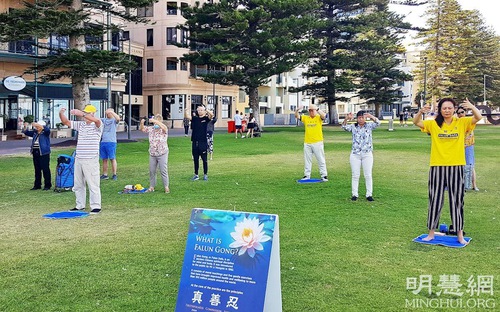 Practitioners do the exercises at Glenelg beach.

Glenelg beach is a popular seaside destination for South Australians. On January 16, people stopped to watch and took photos while practitioners did the exercises in the morning. When they learned about the ongoing persecution in China, people signed the petition to condemn the atrocities.

A woman stopped to watch practitioners do the exercises. After practitioners told her the benefits of the practice, she said, “This is what I have been looking for.” A bus driver and his wife who saw the exercises also expressed interest in learning. 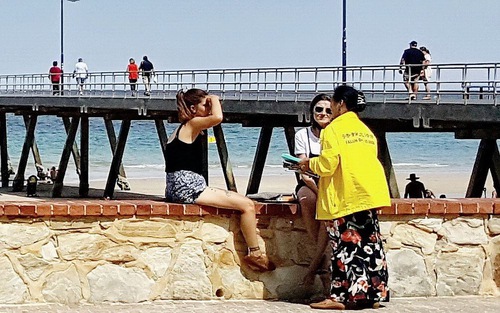 Lorraine and Cate listened as a practitioner told them about the persecution in China.

Lorraine and Cate listened as a practitioner told them about the torture practitioners in China were subjected to over the past two decades. They were shocked especially after learning that incarcerated practitioners’ organs were forcibly removed and sold for huge profits.

After they did the exercises, practitioners drove their cars which had messages about the CCP’s human rights violations around Glenelg’s busy shopping districts and roads along the beach.

People along the route stopped to watch and read the signs. Many people gave thumbs up. Several drivers honked their horns to show their support while others nodded their heads in agreement.

“Chinese New Year Is Coming, But These Families Were Torn Apart for Their Faith”