Home > About Dafa > How to Learn
Online Falun Dafa Teaching Has Benefited Over 20,000 People in 90 Countries
Jan. 21, 2022 | By Minghui correspondent Ying Zi

(Minghui.org) More than 22,000 people in over 90 countries have participated in the free, online teaching of Falun Dafa (also known as Falun Gong) since April 2020. With an increased demand, the online teaching website has expanded to 20 languages, with more coming. As the world struggles to cope with the pandemic, this online teaching has provided an opportunity for people to learn what Falun Dafa is, and how to do its five sets of exercises to improve mind and body.

A screenshot of the web page from LearnFalunGong.com which is available in 20 languages. The Chinese version is shown here.

Benefiting People From Over 90 Countries

The idea of online teaching started when some Falun Dafa practitioners realized they couldn’t go to certain remote regions or visit certain countries for various reasons. Without the opportunity to hold face-to-face workshops in those hard-to-reach places to spread Falun Dafa, they came up with the idea of hosting online workshops so people there could also learn the practice. After the pandemic raged across the world in early 2020, in-person and outdoor activities were restricted, making people more eager to find a solution to relieve stress and improve health. The online website of https://LearnFalunGong.com thus became popular and helped people from various countries.

“Data shows that more than 22,000 people from 90 countries have participated in these sessions. They are from essentially all continents, even areas near the Arctic,” said Dr. Lei. He pointed out that earlier reported numbers of participants only included sessions held in several languages (English, French, Spanish, Chinese, Russian, Vietnamese, German, Indonesian, and Hindi). 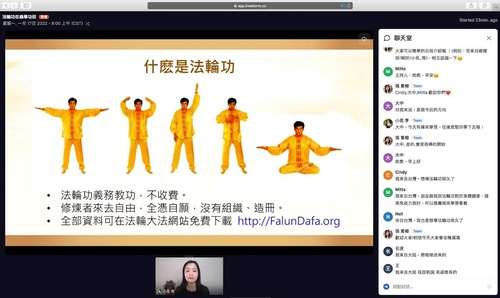 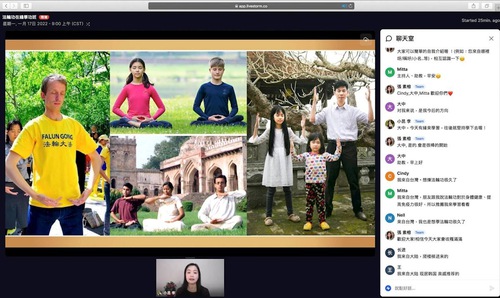 In addition to the above-mentioned languages, online teaching is also offered in other languages, including Japanese, Swedish, Dutch, Turkish, Persian, Korean, Hungarian, Italian, Marathi, Bengali, and Kannada, explained Dr. Lei. Other languages such as Polish, Finnish, Croatian, Ukrainian, and Hebrew will also be added soon. These sessions are held at different times on the website.

Wendy Huang, a professor who coordinates the teaching in Chinese, said that the Chinese sessions started in July 2021. About 420 people from 19 countries have attended the sessions. To accommodate participants from various regions, the teachings have expanded from one to three sessions, two suitable for Asian-Pacific regions, and one for North America.

Dr. Prashant Raina, coordinator for the online teaching in French, said that the French sessions began in June 2021. So far, about 600 people from 10 countries have attended the biweekly sessions.

More than 5,600 people have joined the teaching in Hindi since April 2020, said Surendra Rao. Among them, 80% joined during the past 9 months. As of December 2021, five languages were used for the online teaching hosted in India, including English, Hindi, Marathi, Bengali, and Kannada. Special sessions for youth were also held to meet their needs.

John is responsible for coordinating the online teaching in Vietnamese. About 1,500 people have attended it since its introduction in July 2021. Most heard about it through word of mouth.

For online teaching in German, coordinator Mr. Wang said that about 600 people have attended since the sessions started in December 2020.

Sharing the Information Among One Another 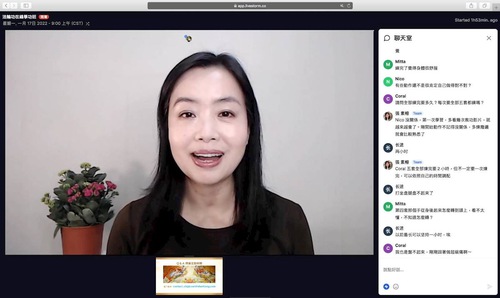 A host answers questions during a teaching session in Chinese.

Participants attended the sessions for a variety of reasons. Some sought to relieve anxiety or stress at work, while others wanted to improve immunity. “I heard about this from my friends and relatives,” one person remarked, “When I tried it myself, I knew this is something I have been looking for...”

Ms. Lin, a practitioner in Taiwan, has been a member of an international organization for a long time. Several months ago, she posted online teaching information to several friends in the organization. One of them attended it and asked Lin a few days later to purchase a copy of the book Zhuan Falun for her. In December 2021, this friend also attended a Nine-Day Lecture session that played video lectures of Mr. Li Hongzhi, founder of Faun Dafa. She was very happy to become a Falun Dafa practitioner.

Ms. Chen has practiced Falun Dafa with her mother for over ten years in Taiwan. Last month she forwarded a link for the online teaching to her elder sister, who was not a practitioner. To her surprise, her sister signed up for it on the same day and was interested in reading Zhuan Falun. Shortly after that, she became a practitioner, too.

David heard about Falun Dafa from his mother-in-law and was glad to attend the online sessions. “I also did meditation in the past, but I mainly focused on ways of calming my mind and concentrating my attention,” he explained, “Falun Dafa has taught me that it is more than that.”

When doing the Falun Dafa exercises, many people felt strong energy flowing inside the body. They could feel a peaceful mind, and the strong healing power of Dafa.

Lanakila was diagnosed with Stage IV rectal cancer. After starting to practice Falun Dafa last July, his condition improved dramatically. During a checkup three months later, the doctor found that his polyps were gone and even scars from his surgery were all cleared.

He also described his experience of doing the sitting meditation. “I could feel energy in my palms, as if my two hands were holding a ball. It is amazing!” he said.

Yamaguchi, a woman in her 80s, heard about Falun Dafa three years ago. But the pandemic prevented her from learning the exercises in a park. Upon hearing about the online teaching, she signed up for it immediately.

“My blood circulation was not good in the past and I was in pain,” she said. “The practice of Falun Dafa helped a lot – the pain stopped, and my appearance improved, too. I am very thankful for these changes.”

Sally said that she was very fortunate to hear about Falun Dafa because it is so precious. She wrote in her feedback, “It opened a new door for me. I have been waiting for this for a long time.”

Andrew had been searching for methods to improve his mind for two years before he came across Falun Dafa. “I like to apply Falun Dafa teachings to my daily life, because it is something I really need.” He is grateful for the inspiration brought by Falun Dafa.

Tranika said she was also happy to know Falun Dafa and the principles of Truthfulness-Compassion-Forbearance.

Lynn said the movements seem simple to learn but they carry lots of energy.

Soncini agreed. He could feel the energy traveling along the stomach, kidneys, and major organs in the body. “It was awesome and my hands were warm too,” he added.

Bree said the principles of Falun Dafa are very profound and they helped her awaken and gain new understandings.

“The beauty of having a peaceful mind is beyond words. I am so thankful! ” explained Laurel.

Mélanie attend the teaching in French. “I could feel warmth and energy in my hands – It was a wonderful feeling,” she said.

Joelinda, from Costa Rica, was moved to tears when doing the third set of Falun Dafa exercises. “It was like a miracle because my meridian system was filled with energy. It is amazing!” she explained.

Being a Good Person

Nhanh from Vietnam wrote a thank-you letter. She said the teaching sessions helped her to know Falun Dafa, the five sets of exercises, and Master Li. “I think it is fate since I was always eager to seek the truth,” she said. “The pressure and chaos in my life are too much. So I was looking for a place to calm down and be myself.”

She thanked the practitioner, Binh, who helped her through these sessions. Right now, she has finished reading Zhuan Falun and The Great Way of Spiritual Perfection.

“I learned a lot. My mind is also calm every day after my reading and doing the exercises,” she said. “We need to do the exercises, but more importantly, we need to cultivate our heart. That is, being a good person wherever we go.”

Dr. Lei said that the Nine-Day Lecture Seminar, where video lectures of Master Li are played, is a great way for beginners to learn more about Falun Dafa. The online seminar starts on the 11th of every month at https://LearnFalungong.com/9daylectures and runs two hours per day for nine consecutive days. Sessions in Chinese and other languages are also in the works.

Every time after the lectures, participants ask many questions. “We can tell that the teachings really touch people’s hearts and enlighten them,” Dr. Lei added.

Mercer said that the words Truthfulness, Compassion, Forbearance are very special. They help people understand the purpose of life and improve our character.

Professor Huang, who coordinates the online teaching in Chinese, said that many Chinese people overcame the Internet blockade to access the online teachings. It happened during each session in the past few months. Some of them may have heard about Falun Dafa previously, but there were no opportunities to learn more due to the suppression since 1999.

Xiang lives outside of China, and he was in tears when attending the first session. “I just received this book Zhuan Falun and I am so excited reading it,” he wrote. “This is the culture in my blood.”

Lin said that she had seen banknotes printed with messages about Falun Gong in her childhood and now is happy to know more through the online platform.

Tang Wukong (pseudonym) said he had gotten a phone call about Falun Dafa back in 2005, but it was not until November 2021 that he had an opportunity to learn more. “In the past, I could only find some flyers. Now the online learning helps a lot. Falun Dafa explains many things to me and I really like being here.” He had attended four sessions already and plans to continue.

One practitioner, Chang Jin (pseudonym), started to practice Falun Dafa in March 1999 while a college student, four months before the Chinese Communist Party (CCP) started the suppression. After the persecution began, school officials often attempted to make him renounce his belief. During an event at the provincial museum in 2001, numerous posters were on display defaming Falun Dafa. When he handed out information telling people the facts, however, he was detained for 15 days. He was held in a labor camp for three years, between 2002 and 2005.

“Officials often harassed me and I could not find other practitioners,” he said. He was forced to give up cultivation, but is now happy to have resumed practicing Falun Dafa thanks to the online teaching. “That is why I found a home here,” he wrote.

Falun Dafa is a meditation system based on the principles of Truthfulness-Compassion-Forbearance. After being introduced to the public in 1992, it quickly attracted numerous learners due to its tremendous benefits in improving mind and body.

Despite its suppression in China, Falun Dafa has been well received in over 100 countries with about 100 million practitioners. Many people found that the practice helps in reducing stress and improving health.

“Young Practitioner: Studying the Fa Strengthens Our Ability to Do the Three Things Well”