Home > News & Events > Parades & Other Community Events
Falun Dafa Practitioners in Central Taiwan Gather to Reflect on Their Cultivation Experiences and Read the Teachings
Jan. 20, 2022 | By a Minghui correspondent in Taiwan

(Minghui.org) Falun Dafa practitioners in central Taiwan held a day-long meeting to read the teachings and discuss their cultivation experiences on January 16, 2022. Attendees came from surrounding cities and counties including Zhanghua, Nantou and Yunlin. They talked about how they eliminated their human notions in order to gain a clearer understanding of the Fa principles and improve in cultivation. 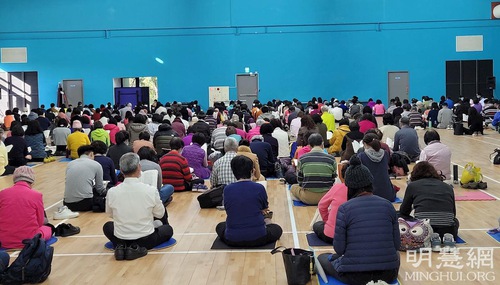 Practitioners from five cities and counties in central Taiwan came together for a day-long meeting at the Zhangnan Guomin activity center. They read the Falun Dafa teachings and exchanged cultivation experiences.

In the morning, practitioners split into 58 groups of around 10-12 people, including a children’s group. This was the first time they split into smaller groups to exchange cultivation insights. In this relaxed atmosphere, every practitioner had a chance to talk about how they identified and eliminated their attachments in daily life, at work or while participating in truth clarification projects. 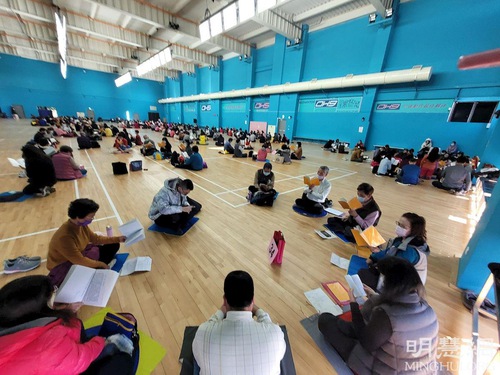 Practitioners split into 58 groups in the morning and read Zhuan Falun.

Many practitioners spoke about their understandings after identifying their notions, believing in Master and Dafa and being clear on the responsibilities of a Dafa disciple. Their experiences inspired participants to practice cultivation solidly.

Jia Sheng talked about how by searching for the root of his notions, he discovered his fundamental attachments. He said he often struggled with coordinating activities in the past because he always thought he was right from the Fa's perspective.

Through studying the Fa and sharing with practitioners, he realized his thoughts were selfish. Compassion is what moves and changes others.

He began to talk to others in a kind tone and attitude, and learned to see things from their perspective. He discovered that coordinating activities was no longer difficult.

Ah Shi, who is 80, talked about the positive changes in her life after she began practicing Falun Dafa.

Her menopause started when she was in her 50's, and her health began to deteriorate. She became very weak, was occasionally dizzy and even lost consciousness. She developed severe osteoporosis, and her bones were extremely brittle and fractured easily. She became depressed. “I waited for death,” she said.

Ah Shi kept noticing signs on buses showing someone meditating. She thought the person looked so serene that she wanted to meditate too. One day she noticed Falun Dafa practitioners meditating in the park. She said that when she approached them, she felt a powerful energy—it felt warm and wonderful. She decided to practice.

She said that when she learned the second exercise, she felt a strong current spinning in front of her chest. Her tears flowed uncontrollably. She knew Falun Dafa was powerful and that Master had begun to take care of her—years ago she broke four bones in her chest and she realized Master was adjusting her body.

Ah Shi was illiterate and did not even know how to write her name. When practitioners told her that Falun Dafa not only requires one to do the exercises, but also read the teachings, she made up her mind to learn how to read Zhuan Falun.

She found ways to learn to read the book. She asked primary school students who passed by her house on their way to school and back home, asked family members, relatives, copied the book by hand and so on. After many years, she was finally able to read Zhuan Falun.

She said, “I experienced many things Master talked about.” She gave an example. Once, she fainted again for no reason. Her family took her to the hospital where the doctors tried to give her an injection. But the needle would not go in. She realized: “I am a practitioner, I am not ill. I must have faith in Dafa.” With this thought, she decided to go home. Upon returning home, she was fine.

Ah Shi has been practicing for more than twelve years and her health is great. She has been to many countries to tell people about Dafa. She is 80 years old this year and her complexion is rosy. She said: “Master lifted me out of hell!”

Ah Cha from Zhanghua has a business at home. She knew about Falun Dafa for 5 years, but was obstructed by her human notions. She always thought she was a kind, good person. She felt doing good deeds was enough and she did not need to cultivate herself. She said, “Years ago, someone told me there are Buddhas, Gods and Taos behind every word in Zhuan Falun but I did not believe it. Until one day a practitioner told me, ‘You may think you are doing something good but it might not be the case.’ I was surprised and did not understand why. After thinking it over I decided to practice Falun Dafa.”

Ah Cha’s eyesight was bad before she began practicing. She could not see clearly even when she wore glasses. One time, she took off her glasses to read Zhuan Falun and discovered that she could see the book clearly. She then realized what the practitioner said was true, “There are Buddha, Taos and Gods behind every word. This is an extraordinary book!”

She also talked about how she averted danger in three car accidents. One time, she rolled under the car and everyone thought she was dead for sure. Yet she sat up unscathed. It was as if a shield was protecting her. She understood that Master protected her once again.

Neighbors would ask Ah Cha’s family, “Who does she pray to? She escaped death three times, she must have a powerful Master.” Ah Cha’s husband replied, “We practice Falun Dafa.”

Yi Zhen, who coordinates the children’s group, said that there are all kinds of temptations in today’s society. Warped thinking in society is influencing and changing people’s behavior. Yet young children who practice Falun Dafa come together to read Zhuan Falun and happily recite poems in Hong Yin. They come up with creative designs for New Year cards and give them to family members. It is truly amazing. 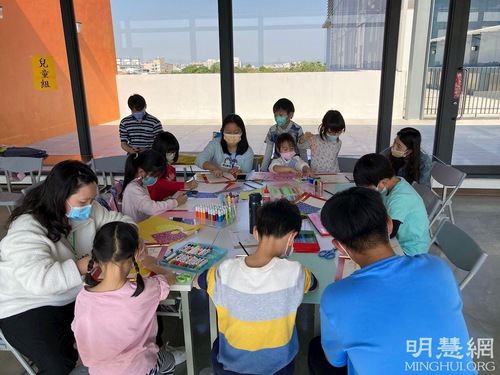 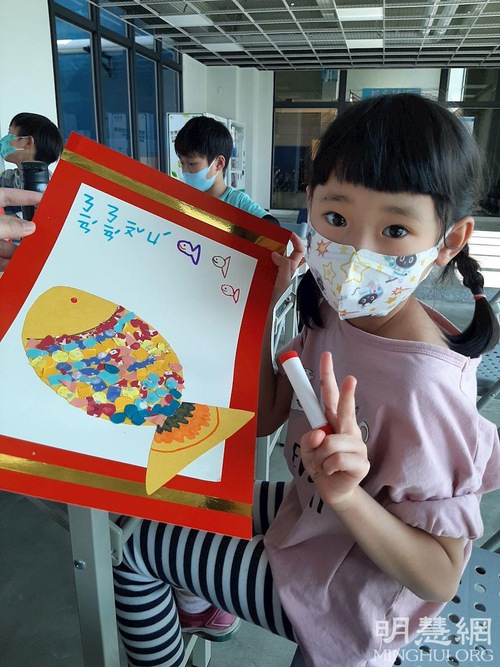 A girl who has just started school showed her design for the New Year card wishing everyone a prosperous New Year.

“I am delighted to spend time with these innocent, young practitioners. It is my responsibility and mission to teach them well,” Yi Zhen said. “It makes me feel innocent and pure like them. Just like their new year greetings, I hope we can continue to be kind and pass on this kindness to those around us.”

Zi Hui leads the kindergarten group. She said taking care of young practitioners is a test of her cultivation state. As long as she is able to teach them using the principles of Truthfulness, Compassion, Forbearance, everything will change.

She gave an example, saying that during Fa study, young practitioners are sometimes distracted. She encourages them: “You read very well, why don’t you read louder?” They are willing to pay attention and read the teachings enthusiastically and loudly.

She said that in fact, young practitioners are presents given by Master. “We are here to cultivate Truthfulness, Compassion and Forbearance together. I only look at their good behavior and give them praise as well as encouragement. These children are full of vitality and kind.”