(Minghui.org) Today's news from China includes incidents of persecution that took place in 11 cities or counties in 7 provinces, where at least 15 practitioners were recently persecuted for their belief. 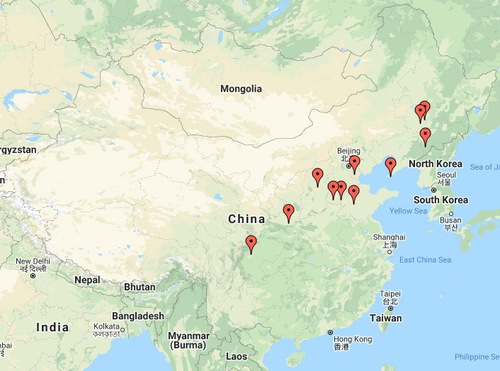 Mr. Wang, in his 40s, from the Zhaoyuan Residential Community, Xiqing District, has been missing for six months since June 2021.

Mr. Zhang Jian was tried via video link on December 10, 2021, and was sentenced to one and a half years in prison.

Mr. Zhang was arrested by officers from the Dongsheng Road Police Station, Erdao District, on April 15, 2021. After 15 days of administrative detention in the Weizigou Detention Center, he was taken to the Changchun City No. 3 Detention Center. He was later prosecuted by the Chaoyang District Procuratorate.

Ms. Ji Guorong was reported to the police for distributing Falun Gong materials last week. She was arrested by officers from the Jinyuan District Police Department and the Jinsheng Police Station. Her current whereabouts are unknown.

Officers from the Yongcheng Police Station in Shifang City asked Ms. Zhang Tingting in Guanghan City to go to the police station on November 9, 2021, on the grounds that she clarified the truth about Falun Gong in Shifang City this past summer when school was not in session. She was interrogated at the police station. Ms. Zhang was taken to the Shifang Detention Center at 8 p.m. that evening. She was held there for five days before being released.

Ms. Yang Penglian from Yongnian District was arrested by patrol officers from the Xiyangcheng Township Police Station while distributing desktop calendars and talking to people about Falun Gong, on December 10, 2021. She was taken to the Yongnian District Detention Center for 15 days of detention. She was released on December 25.

Ms. Sun Yueqin, Ms. Zhang Xifang, Ms. Xu Mingxia, and Ms. Zhang Meihua from Xiedian Township were reported to the police while talking to people about Falun Gong in Daming County in October 2018. They were arrested.

On November 8, 2021, the Feixiang Court called and asked the four practitioners to report. They went there on November 10 and were sentenced by the court without trial. Ms. Zhang Meihua and Ms. Xu were each sentenced to one and a half years in prison and fined 5,000 yuan. Ms. Sun and Ms. Zhang Xifang were each sentenced to one year in prison and fined 3,000 yuan. The four families asked to see the practitioners, but officials denied their requests on the grounds of the pandemic.

Ms. Li Junlan from Liuhe County was arrested while talking to people about Falun Gong at the Sanyuanpu Town farmers market on December 22, 2021. She was detained for 15 days.

Ms. Su Jiangying, 65, from Shankou Town, Daiyue District, was arrested for distributing calendars. She was detained for 15 days and returned home on December 23.

During the interrogation the police pressured her and her daughter to sign paperwork. During the trial, Ms. Lei’s lawyer pleaded not guilty. In the end, Ms. Lei was sentenced to three years in prison.

Ms. Liu Huimin was arrested at home by officers from the Jiutai City Domestic Security Division on December 14, 2021. She was detained in the Weizigou Detention Center for 15 days. She returned home on December 28.

“Overcoming Disability and Illiteracy, Experiencing the Wonders of Dafa”

“My Daughter Recovered From a Rare Muscle Disease”