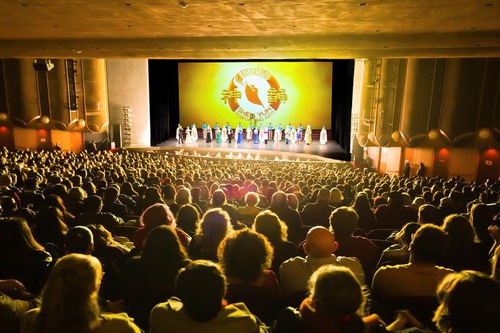 The Shen Yun New York Company continued its performances in San Jose, California, with two sold-out shows after Christmas on December 26 and 27, 2021. Shown above is the company’s curtain call on December 26 at the Center for the Performing Arts. (The Epoch Times) 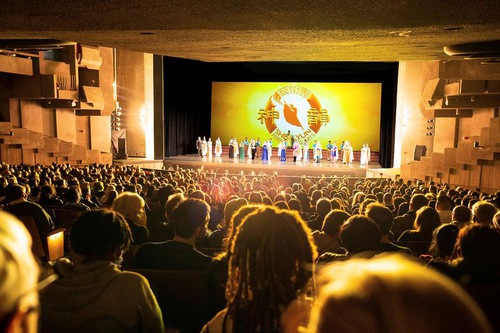 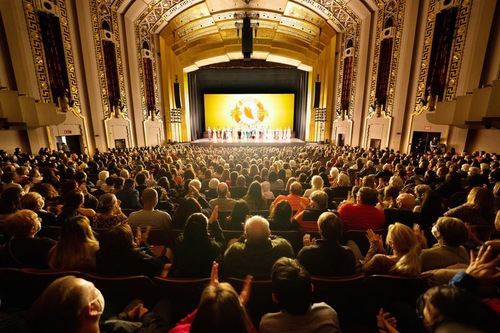 The Shen Yun Global Company presented a sold-out performance at The Bushnell - The William H. Mortensen Hall in Hartford, Connecticut, on December 26, 2021. (The Epoch Times) 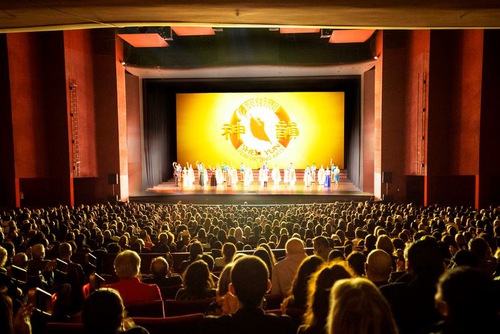 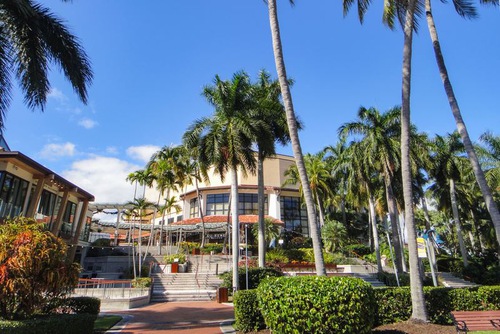 “Speaks to Your Soul” 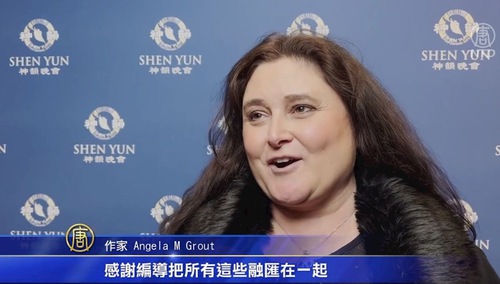 “I loved the performance. It was just breathtaking. And the choreography... of the formations and the dances just really speak to your soul,” Ms. Grout said.

“I had to keep kind of looking over the balcony to remind myself that it was live music, because the orchestra was just perfection,” she said of the live orchestra.

She said Shen Yun gives her hope—especially in this period of time.

“We’ve been living in this world of like, isolation, even though we’re all a community and we’re all feeling the same thing. And we’re all kind of isolated in our own homes or communities... You know that there’s something bigger. And this show really brought that.

“This is about peace, this is about loving the world and knowing that there’s someone who brought us here, you know, we’ve all been sent to Earth for a reason.

“And if that reason may just be to find our savior, to get saved, but it also is to fulfill our purpose. And the dancers on that stage really fulfilled their purpose,” Ms. Grout said. 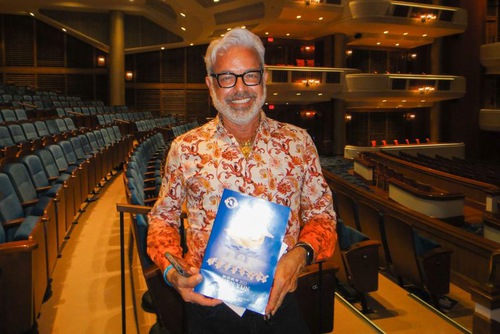 Antonio Divine at the Shen Yun performance in Fort Lauderdale, Florida, on December 29. (The Epoch Times)

“The art, the performance, the stories are so compelling. And it brings so many things to my heart and my soul. I really enjoyed [it],” Mr. Divine said.

“There was actually a point where I got so emotional that it brought tears to my eyes, especially when I saw what’s still happening in China, that they don’t allow people to speak out. So that part really touched my heart,” he said.

Inspired by the theme of compassion in the last dance, Mr. Divine commented, “If we all put our hearts and mind to bring peace to the world, we can do it.”

He explained that he is a very spiritual person and that while watching Shen Yun, he could see a light emanating from some of the performers.

“I feel divinity is a power that we all have inside. We are blessed with that power and we can share it,” he said.

“I was looking at the show, especially at the end when the divine force arrives. I have a few challenges in my life, and I just felt that from now on, after seeing the show that my life is going to improve,” he said of Shen Yun's healing power.

In fact, after watching Shen Yun, he said his body felt stronger.

But after the performance, Mr. Divine realized that his back pain had disappeared.

“I think, you know, it is for everyone, but some people choose to receive it and some people close themselves,” he said. 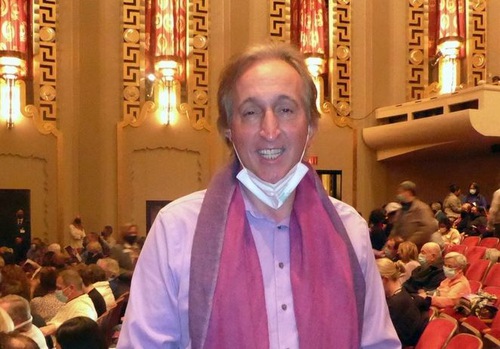 Paul Avgerinos at the Shen Yun performance in Hartford, Connecticut, on December 26. (The Epoch Times)

“It’s wonderful to see the ancient Chinese culture portrayed in such a magnificent way,” said Mr. Avgerinos, who has performed with numerous orchestras, including as principal bassist with the Hong Kong Philharmonic.

“I’m a student of Chinese history and culture and I’m especially fond of the ancient traditions of Taoism and Lao Tzu and Tao Te Ching, and so it’s wonderful to see [Shen Yun keeping] this fabulous tradition alive,” he said.

“I love the combination of the Chinese instruments with the Western orchestral instruments—it’s fabulous. I grew up in the orchestra playing classical music so it’s a lovely combination and to hear a live orchestra.

“But I have done Chinese-inspired pieces for 30 years now, especially back in the 80s and early 90s. I did quite a few because I would just dream that I was in the palaces or walking with Lao Tzu listening to the Chinese philosophy and do a piece called ‘Jade Garden’ or the ‘Lotus Blossoms.’ It’s just such a rich tradition. Since I was a teenager, I was fascinated with the Chinese.

“It’s not easy to combine the Chinese instruments with the Western because the tuning systems are different; the concept of where the notes should be in relation to each other, it’s a little different. It’s tricky but they did a good job. It’s seamless... You forget that you’re hearing a mixture, which is excellent.

“There’s something very special about the ancient Chinese traditions. It’s just so beautiful, and something we can’t lose—it’s priceless... Because of all the modern life... society is forgetting its fabulous history,” Mr. Avgerinos said.

He added, “Technology has enabled an easier and more prosperous mode of living, which is good. But, don’t lose touch with the tradition because that’s what makes us great, the connection with the divine.”

Mr. Avgerinos also spoke about the solo bel canto performance by the tenor.

“I think that the essence of... what the fabulous tenor sang, was that our purpose here is to remember that we are divine! That’s very deep—the purpose of human life is to awaken to the divine and it was sung in that song so beautifully. That’s about as profound as you can get,” he said.

He said a performance such as Shen Yun provides hope to people who are living in times of stress and depression. “I think it helps to remember [that] people have been struggling with good and evil for thousands of years and they’ve been trying to connect with the divine... It’s important. It gives people a sense of history. You know now things are tough... but it will pass. It’s good to help people to look beyond,” Mr. Avgerinos said. 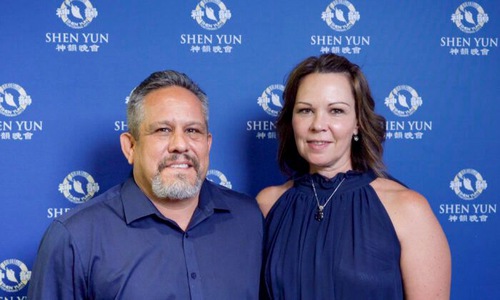 Kelly Leanos with her husband at the Shen Yun performance in San Jose, California, on December 26. (NTD Television)

“It was a really, really great experience and I loved it... The vibrancy and the way that it was choreographed—tells a lot. It was very, very thoughtful. It was gorgeous. And I loved seeing the artists perform,” said Ms. Leanos, who works in architectural design and construction.

“[The stories were] really, really fantastic... I really like the spiritual aspect. I loved the divine side very much,” she added.

She was entranced by the mini-drama, “Three Hundred Years in One Day,” which tells of an old belief where two people with a predestined relationship will be magically brought together even if thousands of miles apart.

“[It] was really, really interesting to see how things from your past have come together into the future,” she said.

Ms. Leanos was amazed to discover that in China it is forbidden to practice one’s faith.

“So to me, that [mini drama] was very, very important and impactful, and it makes us understand the [suffering] that China has experienced through not being able to follow your own beliefs. It’s an important story to share,” she said.

“It Was Really Transformative” 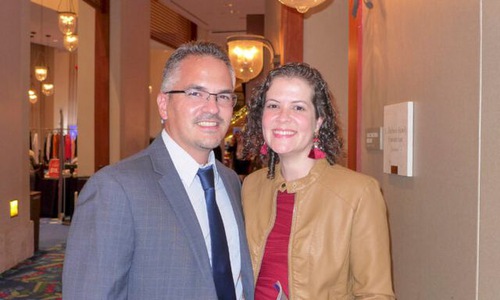 Rene Choy and Leidys Pena at the Shen Yun performance in Fort Lauderdale, Florida, on December 28. (The Epoch Times)

“I thought it was beautiful. I really enjoyed the music and seeing all of the performances, as well as the teachings about compassion and faith and hope throughout the different acts,” Ms. Pena said.

“I was just wowed by the orchestra and how everything worked out so well,” Mr. Choy said. “I find myself closing my eyes once in a while and just listening to the melody. It will take you somewhere. I mean, it was really transformative.”

He elaborated that although he isn’t someone who usually connects with the arts, he was able to understand what Shen Yun was portraying without the use of words.

“I personally enjoyed how each act had an introduction to explain to someone who may not be familiar with the Chinese culture, a little bit about it,” Ms. Pena said of the Masters of Ceremonies’ brief introduction before each act.

“I know the culture is very deep and ancient, but I was not aware of all the different dances and I’m wowed. I really like this. I just can’t explain it, because arts is not my thing. I’m more of a numbers person. But you know, I thought it was great,” Mr. Choy said.

“I think as you connect with the different stories, and you learn, because each performance has their story behind it, and some you connect with more than others. So you’re definitely to get into each of them,” Ms. Pena said.

“A Message of Hope for All Cultures” 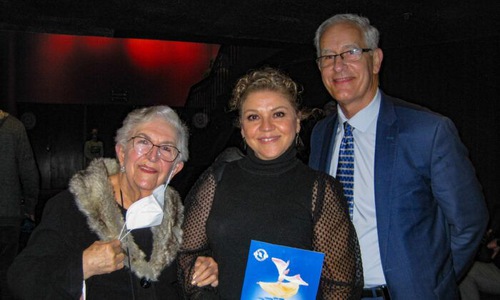 Gamaliel Garcia (right) with friends at the Shen Yun performance in San Diego, California, on December 29. (The Epoch Times)

Mr. Garcia said that a strong impression he got from the performance was “the message of overcoming adversity and difficult times of persecution.”

He also spoke about the performance's emphasis on the values of tradition.

“I think it’s very important because we very easily in modern society forget about traditions. And the emphasis that’s done to bring the knowledge of what those traditions are, is very good. I thought it was very positive.

“It did take me by surprise but it was very positive in the sense of understanding the whole concept of tradition, the divinity, and the importance of that divine nature that is brought in through tradition,” he said.

He added that he sees hope in Shen Yun. “It’s a message of hope for all cultures in any particular situation.

“Because of the negative things that are going on in society, and how we’re beaten down, I think a message of hope really helps people in whatever circumstances, whether in a persecution or a pandemic. It’s that hope of knowing there is something better if we just connect to it,” he said.

“I Want to Cry. I’m Honored to Sit Here” 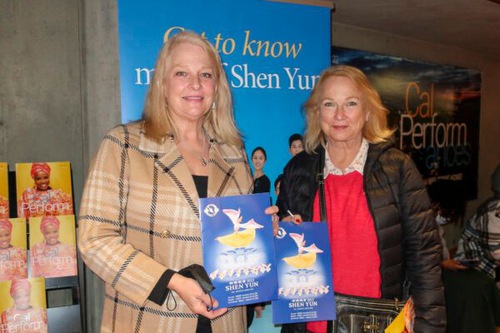 Cindy Reeves and Paula Lozano at the Shen Yun performance in Berkeley, California, on December 29. (The Epoch Times)

Ms. Reeves said that if she were to describe the performance to a friend, she would say, “If you want to [go to] a different dimension, different world, a culture that you didn’t really know about until you sat down and realized what’s happening and going on; if you want to get your world rocked, go see Shen Yun. Your heart [will] open like a plum blossom. It’s just wonderful.”

“The Plum Blossom” dance was especially moving to her.

“I am absolutely speechless. 'The Plum Blossom' brought tears to my eyes,” Ms. Reeves said.

She said she saw values that were close to her heart in the performance.

After going through a rough time with the pandemic, seeing Shen Yun brought Ms. Reeves a sense of safety.

“When I see something like that, there’s nothing that can harm me. There’s beauty in the world again,” she said.

Ms. Lozana agreed with her sister. “That’s what art does for us. The artistry tonight opened my heart, opened my eyes, and I could enjoy the beauty for two hours and get out of the fears of COVID-19, just to be able to come back out and enjoy this with everybody. I’m so grateful,” she said.