(Minghui.org) Falun Dafa (Falun Gong) practitioners in Israel gathered in Nazareth and held a peaceful demonstration on Christmas Day, December 25, to raise awareness of the ongoing persecution of Falun Gong practitioners in China.

The event took place from early morning until noon. Practitioners told passers-by about the benefits of Falun Dafa, distributed flyers about the practice and the persecution, and helped people sign a petition condemning the persecution perpetrated by the Communist regime against practitioners in China since 1999.

Falun Gong is a body and mind cultivation-practice, in which practitioners conduct their lives according to the principles of Truthfulness-Compassion-Forbearance. In addition, they do meditative exercises. The practice is taught all over the world for free, and all the study materials are available online, also at no cost.

Falun Gong practitioners gathered at the plaza in front of the Orthodox Church, next to a large decorated Christmas tree, bringing Dafa’s harmonious energy to Nazareth. Nazareth is an ancient city located in northern Israel, and is the largest Arab city in Israel today. In the New Testament, the town is described as the childhood home of Jesus. It is a popular destination for people of all faiths (Muslims, Christians, and Jews), especially on Christmas.

Two practitioners held a large banner that read: “The World Needs Truthfulness-Compassion-Forbearance” in Hebrew, English, and Arabic. One practitioner, holding a microphone, invited people in Hebrew, Russian and Arabic to approach and learn about the practice and its core principles, and to sign the petition calling for an end to the persecution. 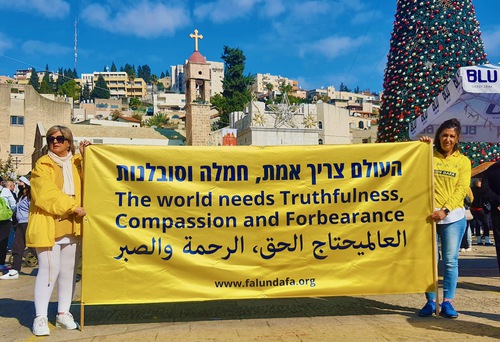 While a group of practitioners demonstrated the exercises, many passers-by stopped and expressed their interest in the practice. Some took flyers, received colorful hand-made paper lotus flowers that were made by practitioners, and learned about the practice, its benefits, and about the brutal persecution against practitioners taking place in China for 22 years. People learned that practitioners in China are held as a live “organ bank,” killed on demand for the thriving Chinese transplant industry. It is a horrific crime against humanity, and Dafa practitioners in Israel came to Nazareth to inform people about it. 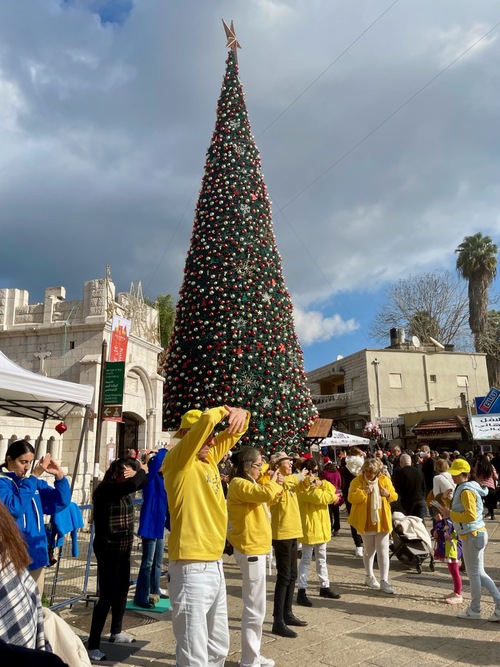 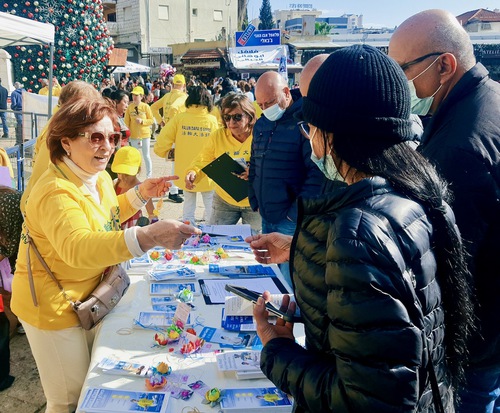 Some of the passers-by had never heard about Falun Gong before, and it was a good opportunity for them to learn about the practice and the persecution in China. Many signed the petition. 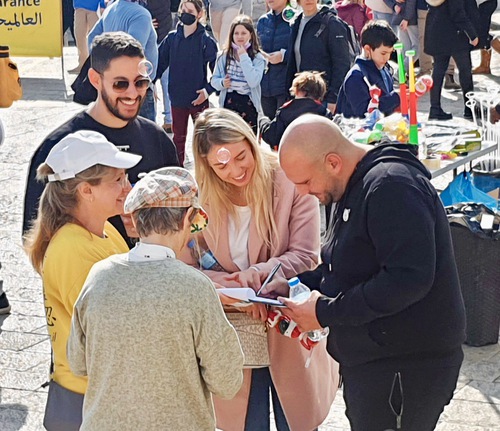 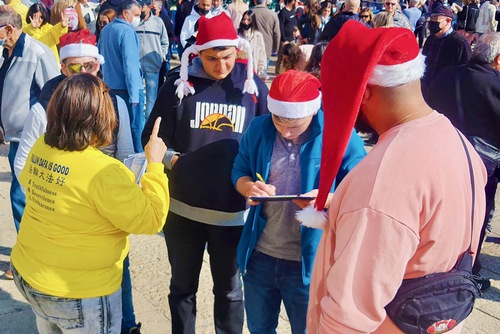 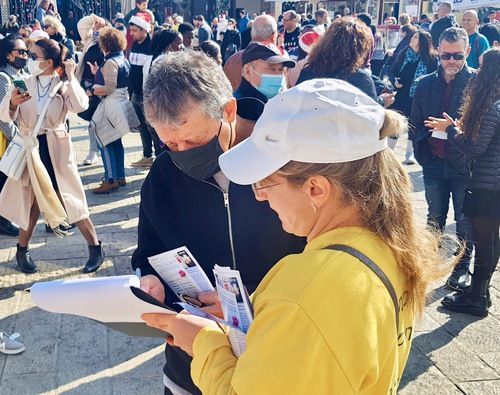 Practitioners connecting with people in the audience

Pnina, a retiree from the city Rishon Lezion in central Israel, said that people are in a rush to receive organ transplants, without knowing anything about the source of the organs, and that is dangerous. She said that it is exchanging one life for another, as the organs are not donated voluntarily, and the “donors” lose their lives in the process. 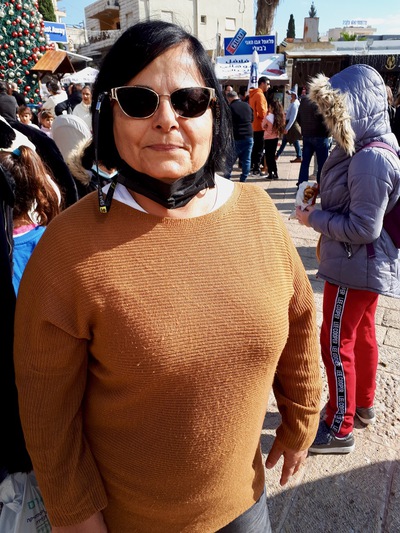 Eitan, a salesperson from the city Rosh HaAyin in central Israel, said, “The principles of truthfulness compassion and tolerance are also my guiding principles in life. There is only one truth, and we as a society are drifting away from it. Getting closer to truthfulness, compassion and tolerance is our mission as human beings, or souls, or spiritual beings living through human experiences. I have thought so for 13 years already, following a spiritual awakening that happened to me after I experienced a major crisis of losing a dear friend. But instead of death, I saw the light. I realized that humanity is polluted by shopping, advertising, the food we eat, and the music we listen to. All of these separate us from our love and from others’ love, and disconnect us instead of unite us.” 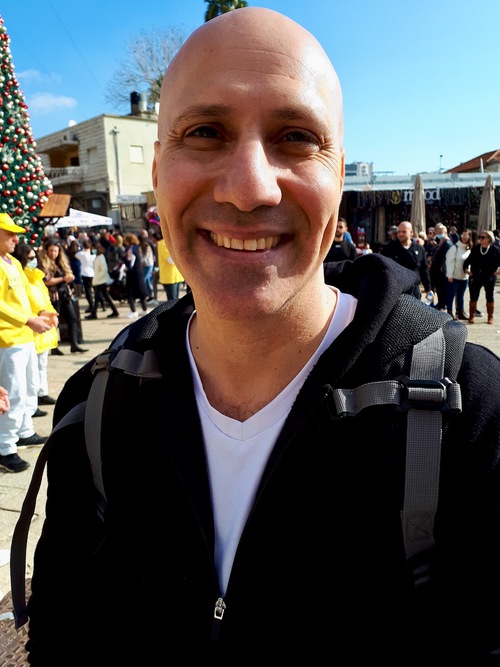 Eitan, a salesperson from the city Rosh HaAyin said, “The principles of truthfulness compassion and tolerance are also my guiding principles in life.”

Daniel, a Yoga teacher, and Guy, who works in the food industry, both from the city Ariel in the central West Bank, said, “This is the first time we heard about the terrible atrocities taking place in China. We are strongly against it, and we advocate that each person is entitled to live according to his or her own faith, all over the world.” 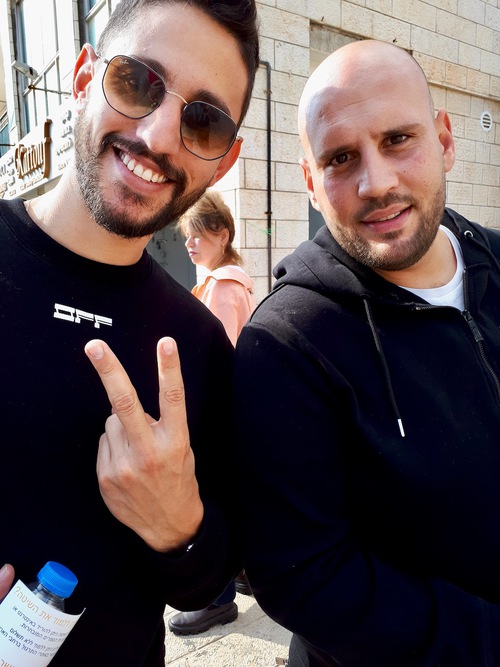 Daniel and Guy heard about the persecution of Falun Gong in China for the first time and were appalled.

Gilad, a teacher of Jewish thought from the town Harish, near Haifa in northern Israel, said, “I heard about forced organ harvesting in China, and thought it was only done to death row prisoners. But either way it’s horrific, because a prisoner should also be entitled to certain rights. Organ harvesting is murder, and it is horrible. The sanctity of human life is a central theme in Jewish thought, and I teach it in my classes. We raise questions in class, such as when is it okay to give up other values for the sake of preserving and saving human lives. But murder and forced organ harvesting are an abolition of the sanctity of life, even if it’s done for the sake of saving another person’s life. It is immoral. The clients who buy these organs are willing to sacrifice a person’s life in China for the sake of saving their own lives. It is a huge problem, and it is inhumane. It is a crime against humanity. 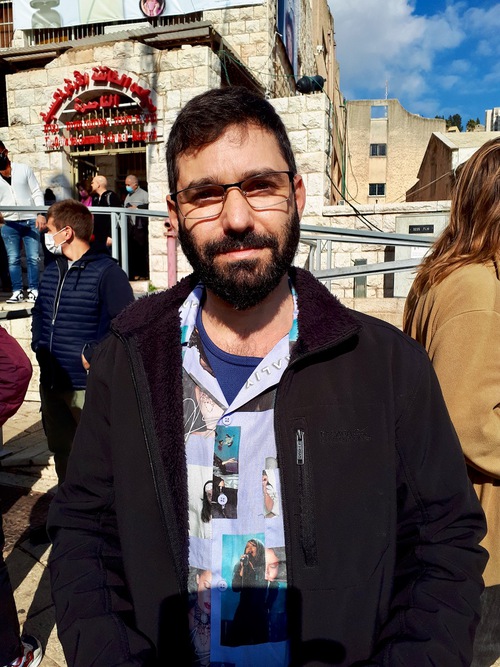 Gilad from Harish said, “Organ harvesting is murder, and it is horrible.”

One practitioner told of a person who declined to be interviewed because he is a famous music producer. The minute he heard about the persecution in China, he realized the importance and gravity of the matter, and signed the petition right away. He said to one of his friends, “You are against animal abuse, and here people’s organs are being harvested by force, how can you not sign it?” His friends also signed the petition following his remarks.

“Only by Clarifying the Truth Thoroughly Can We Really Save People”