(Minghui.org) Mr. Guo Tian is nearly 90 and lives in a village in Taiwan. One day in mid-December 2021 he had an asthma attack and was rushed to the hospital’s intensive care ward.

The old man suffered from a blocked air passage. Despite taking medication, his symptoms did not lessen. He developed lung inflammation and edema. According to the doctors due to his old age, his lungs had exhausted their capacity and he might die at any moment.

His daughter Tong Long is a Falun Dafa practitioner. While her father struggled to breathe she told him to say, “Falun Dafa is good, Truthfulness-Compassion- Forbearance is good.”

He immediately agreed and his sincerity led to a miracle that astonished the doctors and his family. 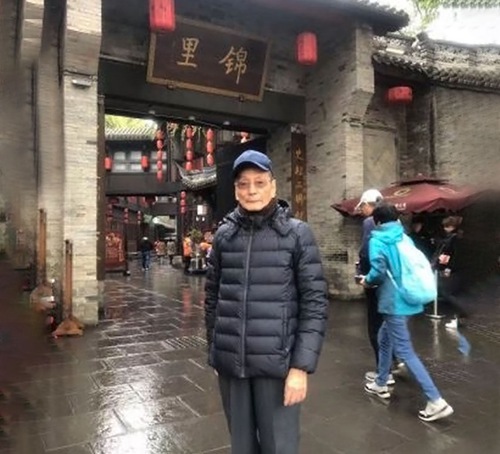 Black Lungs From Decades of Smoking

Mr. Guo was a fisherman and farmer when he was young. Most people around him smoked and he also smoked for decades. Medical examinations revealed that his lungs were black and they were failing. He often had to be sent to the hospital because he had trouble breathing.

The doctors told him, “Your lungs are severely damaged, do you want to die?” The old man resolved to quit smoking after hearing the doctor’s words. Tong Long said, “My father is an obstinate man, but he meant what he said.”

However his lungs were already too badly damaged and they could not return to normal. According to medical science, there is no cure for “long term blocked respiratory passage.” His lungs continued to deteriorate. When his symptoms worsened he coughed up phlegm and could not catch his breath. His children installed an oxygen generator at home so that he had access to high density oxygen. He was repeatedly sent to the hospital, and came over without any risk. His body was basically in a stable state.

These past two years, he frequently complained of discomfort and his asthma recurred more often. This time, he also had stomach pain. He needed to be supplemented with oxygen more frequently.

On December 13, 2021, the old man still could not catch his breath despite being put on the oxygen generator. He was rushed to the hospital by ambulance and immediately taken to intensive care.

Staff told family members his life was in danger and asked them to sign documents. The doctor said, “The medication can no longer control his asthma. He can die at any moment.”

The next day, his children were informed that he had severe lung inflammation and edema again. The carbon dioxide in the lungs could not be exhaled, and the concentration was twice that of ordinary people. There was no way to reduce it with medication.

The doctors kept saying they were not optimistic and wanted the family to decide if they agreed to inserting a tube or making an incision into his trachea. The family decided not to let their father go through further suffering.

Reciting Falun Dafa is Good Makes all the Difference

Tong Long is a teacher. She began to practice Falun Dafa after a student’s parent told her about the mind-body practice in 1998, and she has been practicing Dafa for 23 years. From an introverted and physically weak person she became happy, and healthy soon after she began practicing.

She said her father believed in traditional folk lore and prayed to ancestors and gods. He knew that Tong Long practiced Falun Dafa. She said, “Although my father has many stubborn notions, he respected my faith, Falun Dafa.”

Due to the pandemic, the hospital only allowed two people to visit for 30 minutes a day.

On the third day it was finally Tong Long and her sister’s turn to visit their father. Tong Long said, “My father’s consciousness was clear and I did not believe he could die at any time. I cannot help him by bearing the pain of his illness but I knew I should tell him a way to save his life: By reciting Falun Dafa is good, Truthfulness- Compassion-Forbearance is good sincerely. I asked Master to help my father.”

She told her father, “Besides cooperating with the doctors and the treatment they prescribed, the best thing you can do to help yourself is say Falun Dafa is good, Truthfulness-Compassion-Forbearance is good.”

He immediately replied, “Alright, I will recite the phrase.”

They could only stay for half an hour. Before leaving, Tong Long kept reminding her father not to forget to recite the phrase. He said, “Yes, I will say it. I memorized it already.”

Three family members studied medicine but they each had different faiths. However all of them believed in god, Buddha and miracles. Tong Long told her family that many people saw their lives take a positive turn after believing in Dafa. Others said that reciting the phrase had a positive effect. The family encouraged their father to recite the phrase and asked Master to help by blessing the old man.

The following morning the family were told by the hospital, “The old man’s condition has stabilized. He can be moved out of ICU.”

The first thought Tong Long had after hearing the news was to thank Master for his compassion. She said, “My father agreed to recite the phrase. Master saw his sincere thought and helped him.”

The old man recovered very well, surprising doctors and family. After one week he was well enough to go home. A week later, on December 29, the test results came back indicating his lungs were functioning normally and his blood oxygen levels were within normal range. According to the doctors, his lungs were exhausted and could only become worse. Now, his lungs recovered.

Tong Long said, “My father knows very well that Master saved him. Indeed believing in Dafa has brought a miracle. Now, my father feels better and has more energy. He continues to recite the phrase sincerely and even told me he writes the characters Falun Dafa is good, Truthfulness-Compassion-Forbearance is good on a paper several times a day.”