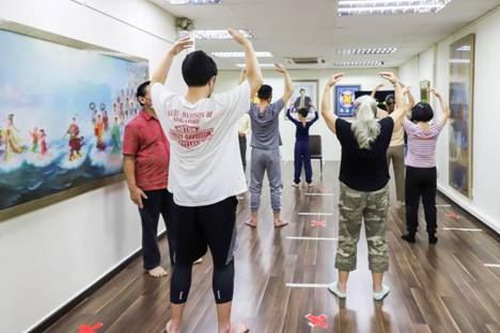 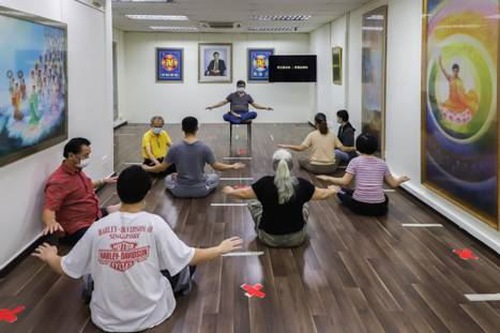 At the end of the nine day workshop, everyone talked about their experiences and thoughts. The new practitioners talked about the amazing changes they felt mentally and physically.

Xiao Zhang shared about the great changes he experienced after he started practicing Falun Dafa. He said, “I had a very bad temper and was a boxer. I always thought of all sorts of methods to take revenge and bully others. However, after I began practicing Falun Dafa, I read Zhuan Falun many times. I learned that there were many things that I did which were not right. We should think about others when we do things. Through reading the book, I also found the answers to many matters I did not understand before.”

Xiao Zhang also mentioned that before attending the workshop, many of his exercise movements were not very accurate. He thanked the practitioners for helping him correct them during the class.

Grateful for a Second Chance to Practice

Xiao Xu said that when she was in China, one of her neighbors practiced Falun Dafa. The neighbor always told her that Falun Dafa was good, but she just would not listen due to the intense persecution atmosphere in China. This neighbor’s mother, who is 81 years old, also practiced Falun Dafa but she looked 10 years younger than her mother, who is 74 years old! Furthermore, her neighbor’s mother even helped her neighbor take care of her grandchildren, taking them to school and back home. This gave Xiao Xu a chance to witness Falun Dafa’s amazing ability to help people regain their health. At that time, Xiao Xu’s physical and mental condition were not good, so this neighbor and her mother gave her a copy of Zhuan Falun to read. They also taught her some of the exercise movements. However, she did not persist.

After she moved to Singapore, Xiao Xu started looking for Falun Dafa. She said, “I searched for more than half a year to no avail. One day, I coincidentally received a flyer. It was a Falun Dafa flyer! I almost cried.”

Xiao Zhang, the new practitioner beside her, said, “If you have the heart to cultivate, Master will help you.”

Xiao Xu said that she looked for a practice site which was close to her house. No matter how she searched, she just could not find one. One day, as she was searching around the park, she suddenly heard the exercise music. Xiao Xu said that she had a hair loss problem. After attending the workshop, her hair stopped falling out.

She said that she once had a surgery, during which steel pins were installed in her ankle. When she first started doing the meditation, she had to use a towel to support her leg to lessen the pain. However, on the ninth day of the class, she no longer needed the towel to support her leg and it no longer hurt. Full of gratitude, Xiao Xu said, “I feel better and better every day. Thank you Master!”

Xiao Peng practiced Falun Dafa with her mother and family when she was in China. After the Chinese Communist Party (CCP) launched the persecution, she helped distribute truth-clarifying materials. However after getting married and having a child, Xiao Peng became very busy and she stopped practicing.

One day, her mother told her that she should never give up such a good practice. She suddenly realized that she had lost something good. As soon as she moved to Singapore, Xiao Peng went online and saw the notice about the nine day class. She immediately registered. Xiao Peng said, “The moment I stepped into the activity center and saw Master’s portrait, I felt so ashamed and so regretful. I felt that I must practice diligently and not give up! I wasted too much time. Now, I must do my best to make use of the available time left to practice.”

Xiao Liu said that in 2014 he heard about a way to overcome the CCP’s Internet blockade while he was still in China. Curiosity led him to find the freegate software that was developed by Falun Dafa practitioners. Later, he got to know the truth about Falun Dafa and even watched the Legends Unfolding documentary. He said, “The CCP instilled fear in people through all sorts of political movements. I still decided to use my real name when I quit the CCP affiliations. I even read Zhuan Falun online. In the past, I had many questions in my mind but after reading Zhuan Falun, all my questions were answered. At that moment, I decided that I am going to take Master Li as my Master.”

“Although after 2015 I did not practice the exercises and I seldom read the books, I became very healthy and I no longer needed to take any medication. In my heart, I had this steadfast thought, ‘Master Li Hongzhi is my Master!’”

Xiao Liu also started to clarify the truth to his friends in 2017. They rejected what he told them. Later, he met a practitioner, who explained that he must study the Fa before he went out to persuade people to quit the CCP. He started to study the Fa and do the exercises seriously.

He moved to Singapore three months ago. He knew that there are people practicing Falun Dafa all over the world. He went online the day after he arrived in Singapore and managed to find information about the Falun Buddha Society. He managed to contact the practice site near his house.

The Falun Buddha Society (Singapore) is situated near the Kallang MRT Station in Singapore. In order to provide assistance to local residents to learn and practice, regular free Falun Dafa workshops are being held throughout the year. This will help more people to attain a healthy body, inner peace and an elevation in spiritual level. The nine day class is held from 7:15 pm to 9:45 pm for 9 continuous days and the next session will be held from 12th to 20th March 2022.