(Minghui.org) Today's news from China includes incidents of persecution that took place in 13 cities or counties in 7 provinces, where at least 40 practitioners were recently persecuted for their belief. 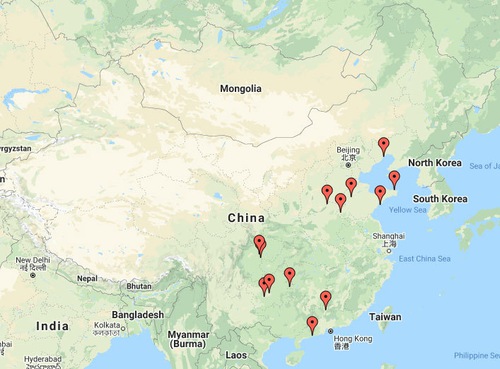 Five practitioners were arrested after they were recorded by surveillance cameras posting truth-clarifying stickers in Qihe County.

Ms. Yu Chunli and Mr. Wang Guohui were arrested in 2018 and released on bail on July 9, 2018. They were forced to renew the bail in July 2019 as well as in July 2020. It was recently learned that their cases were transferred from the Jimo Procuratorate to Jimo Court.

Ms. Yu was harassed again at her workplace in April 2020, which made her lose her job. During the “Zero-out” campaign, she and her family members, including her 20-year-old son, were harassed several times and pressured to sign the guarantee statement promising not to practice Falun Gong. None of them cooperated.

Mr. Wang Guohui and his mother (a practitioner) had their daily rations suspended in November 2019, which was ordered by the Jihongtan Sub-district Office. The village committee also suspended Mr. Wang’s mother's monthly welfare for the elderly. Their holiday welfare was also suspended.

Ms. Liu Xuezi, around 80, lives in Qunli Town, Pengxi County. She was harassed at home one night in October 2020. Several officers from the town police station and the county police department came to search her home. They did not find anything.

Ms. Liu was harassed again on the afternoon of November 19, 2020, by several officers including Lin Jun from the town police station. They left without finding anything. Ms. Liu was taken to the Pengnanchang Police Station on November 26, 2020, but was released the next day.

Mr. Mo Mingxue, around 70, and Ou Congfang (gender unknown) were also arrested and taken to the Pengnanchang Police Station. Their homes were ransacked. Their Dafa books were taken. They were released later that day.

Ms. Tang Lijun, around 60, also lives in Qunli Town, Pengxi County. She was harassed several times by officers from the town police station in October 2020. She refused to sign the guarantee statement.

Ms. Tang was taken to the Pengnan Town Police Station around November 15, 2020. Her two cell phones were taken away. She was interrogated for 12 hours before she was released.

Mr. Li Jiyou from Qunli Town was harassed three times in October 2020. He was harassed many times throughout the years. Mr. Li Jiyou was detained in the Pengxi County Detention Center for one month.

Ms. Yang Rongrong was arrested in Niuxu Market by officers from the Nan’en Police Station on January 22, 2021. Her home was ransacked and some personal belongings were taken away. She is currently detained in the Baisha Detention Center.

Ms. Wang Laiqin and her husband were arrested at home by officers from the Linqi Police Station in June 2020. Their homes were ransacked. They were detained for 10 days and 15 days respectively. The couple was harassed again on January 11, 2021.

Jiang Yun and Qing Ying (their genders are unknown) from Nanshan Village, Quilin Town, were arrested and detained for 10 days and 15 days respectively in September 2020.

Li Rujin (gender unknown) was harassed at home multiple times by officers from the Quilin Police Station in August and September 2020. The couple was taken to the police station to be photographed.

Ms. Wang Yuqing, 77, was arrested by officers from the Xixiu District Domestic Security Division in August 2020 for clarifying the truth. She has been detained in the No. 2 Detention Center of Xixiu District since then. Her family members were not allowed to visit her or to send her clothing. She wore thin clothes when she was arrested and it is now winter. Her family is very worried about her.

Ms. Wang Yuqing was detained for more than 40 days in 2003 for clarifying the truth. She was sentenced to three years in prison in 2013 for distributing truth-clarifying materials. She was brutally tortured in jail. She never fully recuperated from the injuries and still cannot stand up straight.

Mr. Teng Jianjun from Nanming District was harassed at home by officers from the Shuikousi Police Station including Li Jialin in August 2020. They told him to give up practicing Falun Gong.

That afternoon, the same group of people went to Ms. Zhang Chunming’s home to harass her. They threatened her and said they would reduce her pension, interfere with her grandson’s schooling and her son’s employment.

The same people also went to Ms. Zhang Chunyun’s home in late January 2021 to harass her.

Ms. Wang Xuezhen and Mr. Liu Gaowen were arrested by officers from the Chengbei Police Station in Taihe Town on May 12, 2020, for clarifying the truth. Ms. Wang Xuezhen was first detained in the Pengxi County Detention Center and was later transferred to the Suining City Detention Center. Mr. Liu Gaowen was arrested several times, but released because of his health condition. Mr. Liu was arrested at home again around 11 p.m., on December 11, 2020.

Ni Weiqing (gender unknown) was sentenced to three years in prison. Ni has decided to appeal.

Ms. Liu was detained in the Huludao Detention House for 15 days. Her family was informed on January 21, the day before she was supposed to be released, that she had been transferred to the Xingcheng Detention Center.

Ms. Peng Tingji was arrested at the farmer’s market by two policemen on the morning of January 21, 2021, for clarifying the truth. She was released two or three hours later.

It was said that Ms. Peng was harassed at home around 2 or 3 p.m., on January 27, 2021. Several people from the police department and the political and legal affairs committee broke into her home. They tore off the Dafa-related paintings on the wall and took away some personal belongings.

Ms. Zhao Aizhen and Ms. Wang Cuiying from Mudan District have been detained in Heze City Detention Center for nearly one year and eleven months.

Their first court hearing was held in the Juancheng County Court on January 15, 2020. Their lawyers presented a strong innocence defense.

Their families were informed that a second hearing would be held in the Juancheng County Court at 3:30 p.m., February 1, 2021, via an online virtual courtroom